Please ensure Javascript is enabled for purposes of website accessibility
Log In Help Join The Motley Fool
Free Article Join Over 1 Million Premium Members And Get More In-Depth Stock Guidance and Research
By James Brumley - Mar 5, 2021 at 10:50AM

A handful of big store chains are finally starting to embrace reality rather than resisting it.

Two years ago, department store retailer Kohl's (KSS 6.70%) and e-commerce giant Amazon (AMZN 4.03%) expanded a curious partnership. That is, Amazon customers looking to return an online purchase could now take their return to any Kohl's store rather than dealing with the hassle of shipping the item back to Amazon themselves.

The idea had a clear upside -- stores need foot traffic, and this was a chance to generate it. On the other hand, the agreement potentially positioned Kohl's as no more than an uncompensated customer service agent for the ruler of online shopping.

The idea seems to be paying off more than it's costing the store chain. Kohl's announced earlier this week that handling Amazon returns has brought an additional 2 million customers into the company's fold, and "is accretive to both sales and profit." The company didn't offer any numerical specifics, nor did it say how it knows those 2 million people wouldn't have become Kohl's customers anyway. The fact of the matter is, however, Kohl's sees enough upside in it to continue on with the program. 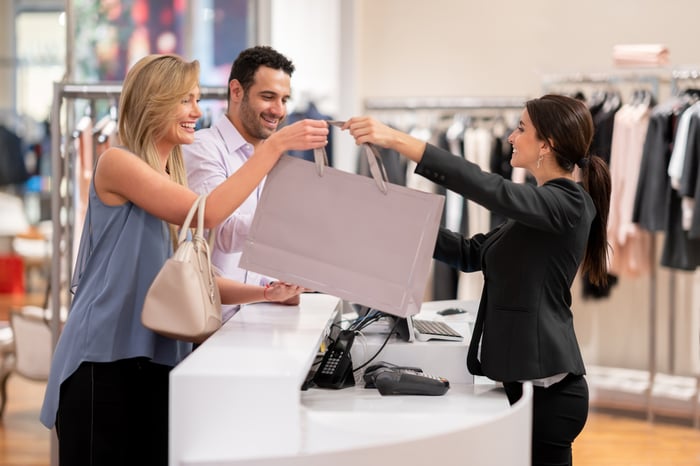 Such deals won't necessarily end the so-called retail apocalypse that led to the shuttering of more than 11,000 stores operated by numerous companies last year, according to numbers from Costar Group. That total is up from 2019's 9000-plus closures. For the companies capable of forging the right agreements in the right way, though, these partnerships just might mean the difference between surviving and dying. And we're actually seeing more and more of these collaborations.

An awakening, just in time

In some regards, it's not a fair fight. E-commerce platforms require lower levels of staffing, and the square footage they require doesn't need the sort of polish most department stores add. Consumers don't mind waiting a day or two for shipping either, particularly when their purchase choices are unlimited.

End result? Online shopping websites are generally much cheaper to shop, allowing them to chip away at department stores' revenue. The Census Bureau estimates 2019's pre-COVID department store sales in the U.S. total $135 billion, down nearly $100 billion from 2000's peak, which also happens to be when Amazon first started to solidify the e-commerce industry. 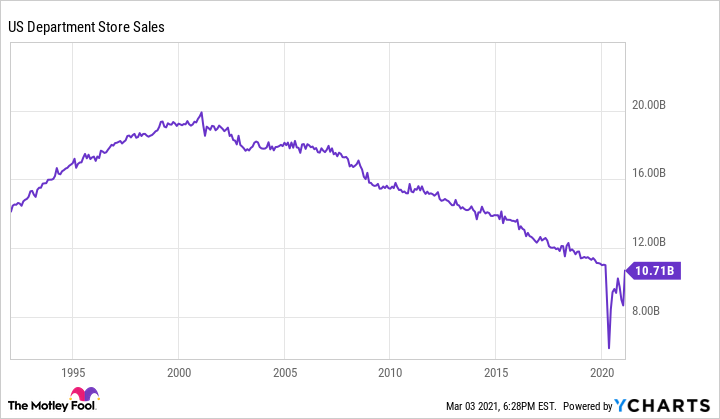 Brick-and-mortar retailers only aggravated this contraction, though, by taking their customer relationships for granted. Indeed, customer service has almost turned into customer contempt. Stores have also failed to keep in-store shoppers interested, although this is finally changing.

As NORA Network's Paul Greenberg put it: "The in-store experience will continue to be deeply engaging, making that transition from a transactional environment to an experiential and entertaining experience."

"Entertainment" in a retail context is difficult to define, but certainly part of it includes unexpected discoveries of new products. As for "experiential," more personalized advice or service from in-store associates is needed, and starting to take shape.

Still another component of the idea is a store chain's response to modern lifestyle demands. To this end, Kohl's knows online shopping is here to stay, but also understands that around a third of online purchases are ultimately returned. Handling Amazon's returns brings actual people into the building, giving the department store chain a chance to sell something to them.

Frenemies are increasingly the solutions

We're seeing more and more of these unusual partnerships within the retailing arena.

Case in point: Also earlier this week, department store Nordstrom announced fitness equipment from Tonal will be featured in 40 of its stores, occupying about 50 square feet at these locations. It's not part of Nordstrom's typical product mix, which is fashion-focused.

But we're not living in typical times. The COVID-19 pandemic has accelerated consumer interest in at-home gym equipment. Nordstrom's in-store shoppers might like to see and even touch Tonal's hardware, even if they weren't expecting to do so during that shopping excursion.

Target and Walt Disney are also teaming up. The retailer already offered Disney-branded merchandise, but as part of a deal made in 2019, the retailer now maintains several dozen dedicated Disney shops within its stores.

Target rival Walmart (WMT 2.13%) is teaming up with indirect competitors in a different way. Rather than building a moat around its e-commerce platform and only selling its own products, Walmart.com is open to third-party sellers.

The mega-retailer is even encouraging certain clients of online-shopping service providers Shopify and BigCommerce to sell goods via its e-commerce platform, rather than trying to compete with them. These partnerships broaden the number of products Walmart.com is able to offer.

And the curious Kohl's partnerships aren't limited to handling Amazon's returns. Even though the retailer already sells cosmetics and other beauty goods, in December the company announced nearly 1,000 Kohl's stores will have (LVMH-owned) Sephora-branded beauty counters in them by 2023.

It's curious simply because Sephora not only manages shops found within J.C. Penney stores, but operates stand-alone stores that already compete with Kohl's cosmetics and beauty counters. Kohl's is even sharing space with an Amazon-branded grocery store, although that deal appears to be more of an experiment than a solidified program.

Welcome to the new normal

It's still early days for the idea of working with competitors, and as such, it remains to be seen how much benefit retailers will actually reap from these seemingly strange partnerships. Brick-and-mortar stores are increasingly seeking them out, though, which speaks volumes.

The task for investors is simply figuring out which store chains are employing smart collaborations that actually build business, as opposed to deals that may do more harm than good. As it stands right now, the unusual Kohl's deal with Amazon appears to be more the latter than the former.