Please ensure Javascript is enabled for purposes of website accessibility
Log In Help Join The Motley Fool
Free Article Join Over 1 Million Premium Members And Get More In-Depth Stock Guidance and Research
By Rich Smith - Mar 5, 2021 at 7:35AM

With continued sales growth, there's a chance TPI can break its losing streak.

The bigger the windmills are, the harder they fall -- and that was the case with wind turbine blade-manufacturer TPI Composites (TPIC 4.44%) after last week's earnings news.

While much of the U.S. economy was caught in economic doldrums last year, TPI's green energy-friendly business seemed to go nowhere but up. Sales grew 16% in comparison to 2019, and operating profit swelled 18%, helping to grow the company's stock price seven-fold from the stock market's March nadir through the TPI stock's peak earlier this month. In Q4 alone, sales grew 10% and operating profit grew 69%, resulting in a $0.14 per-share profit for the quarter that helped pare the year's losses to $0.54 per share.

That profit was unexpectedly good, beating analyst expectations for $0.12 for the quarter, and quarterly sales in the year's final quarter likewise beat estimates. So why did TPI stock crash 20% in response to the earnings news? 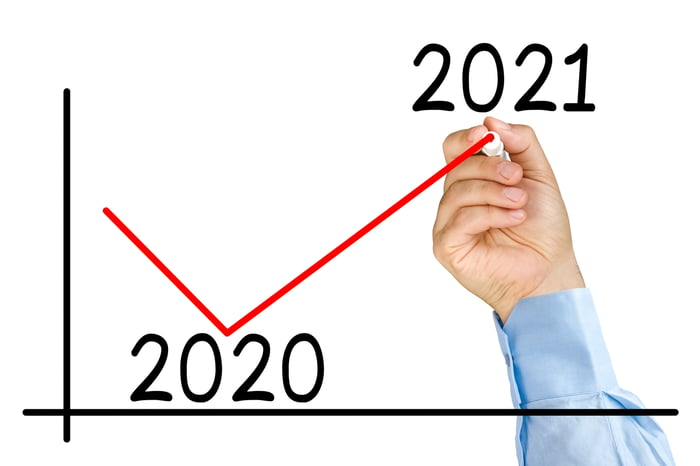 Well, let's not gloss over the bad news: TPI Composites may have "beat earnings" in Q4 in particular, but that doesn't change the fact that on the bottom line, the company still lost money for the year as a whole.

Sales may have been up 16% for the year, but the cost of those sales grew 21%, eating into gross profit margins. Reductions in operating costs helped put some money back in TPI's coffers, but then higher interest costs (TPI's long-term debt has roughly doubled over the past couple of years) and unfavorable foreign exchange rates further sapped earnings, to the point that on the bottom line, TPI ended up losing 20% more money in 2020 than it had lost in 2019 -- the aforementioned $0.54 per share.

The news wasn't much better on the cash flow statement than what we saw on TPI's income statement. TPI's operating cash flow plummeted 34% in 2020, to $37.6 million. And while capital spending also declined (falling 13%), this still left TPI with negative free cash flow for the year -- negative $28 million, in fact, which was even worse than the company's $19 million net loss as calculated according to generally accepted accounting principles (GAAP).

Thus, for the third straight year in a row, TPI Composites grew its sales, but continued to burn cash.

Management thinks so, and Wall Street seems to agree. Despite the negative earnings and negative free cash flow in 2020, CEO Bill Siwek assured investors that "strong long-term demand prospects for wind in the U.S. and globally, driven by economics as well as the acceleration of decarbonization initiatives, give us confidence in our global wind strategy."

Here in the U.S., Siwek confided, "while it's still a bit early to speculate on the ultimate impact the new U.S. administration will have on renewables, based on early actions and stated intentions, we view the long-term outlook under a Biden administration as very supportive and beneficial to renewables and therefore our business."

Management is forecasting that in 2021, sales will continue to grow to somewhere between $1.75 billion and $1.85 billion, a modest rate of 8% growth at the midpoint, relative to fiscal 2020 sales. Management did not forecast its GAAP earnings, but said that "adjusted" earnings before interest, taxes, depreciation, and amortization (EBITDA) should range from $110 million to $135 million. At the midpoint, that implies 30% growth over the $94.5 million in adjusted EBITDA earned in 2020.

Crunching these numbers, Wall Street analysts polled by S&P Global Market Intelligence now predict that TPI Composites will return to profitability in 2021, earning about $0.83 per share, net, and generating in excess of $40 million in free cash flow. Of course, even if TPI hits these numbers, this will value the stock at 45 times free cash flow and nearly 60 times earnings. Whether those are bargain prices will depend on how fast TPI can grow its profits thereafter.

But let's not put that cart before the horse. I'll personally be happy just to see TPI earn that first profit, before worrying about how fast it can grow it.