Please ensure Javascript is enabled for purposes of website accessibility
Log In Help Join The Motley Fool
Free Article Join Over 1 Million Premium Members And Get More In-Depth Stock Guidance and Research
By John Ballard - Mar 6, 2021 at 9:22AM

The acquisition of Echtra Games could play a big role in growing the value of this gaming business.

Zynga (ZNGA) has made smart use of acquisitions to fuel its growth for several years, and it just landed another one with Echtra Games. Zynga didn't disclose the purchase price, so it was likely a small deal, but the potential returns from this one acquisition could be significant as Zynga aims to tap into the talent at Echtra to expand its gaming empire beyond mobile devices.

A key reason why Zynga acquired Echtra Games is the expertise the studio has in developing cross-platform games, which Zynga has in its current development pipeline.

What are cross-platform games? Before the days of cloud computing, someone playing a multiplayer game on a Sony PlayStation, for example, couldn't team up with others playing the same title on a Microsoft Xbox. But technology now exists to make games compatible across platforms, and it's becoming quite popular with players. 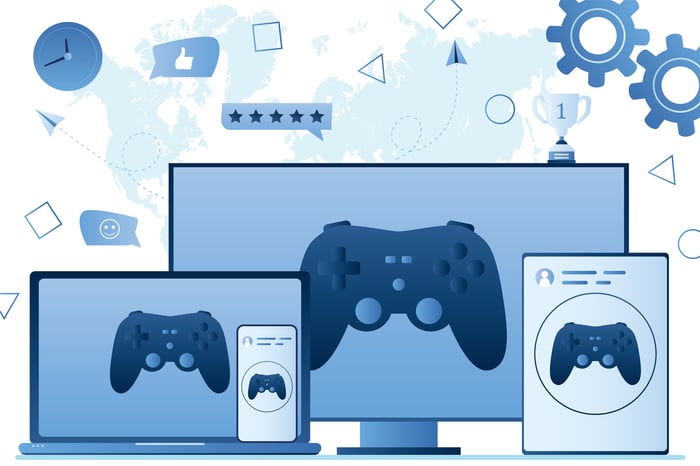 Several of the most popular games on the market support cross-play, including Activision Blizzard's Call of Duty and Microsoft's Minecraft. Epic Games' Fortnite even allows players on mobile to group up with those on console or PC.

Like every game company, Zynga wants to reach as many people as possible with its titles. More players allow the company to spread development costs across a wider player base, and therefore grow profits. Cross-platform games are one way to do it.

Cross-play titles tend to attract a large audience, which creates an abundance of monetization opportunities. For example, Activision's Call of Duty had a record year last year, generating $3 billion in bookings, while the success of Fortnite has made Epic Games one of the highest-valued game companies in the world.

During the last earnings call, Zynga CEO Frank Gibeau highlighted the opportunity with cross-play games, stating: "That's where you see a lot of billion-dollar franchises, and they're driven by free-to-play dynamics and live services which we think we have a competitive advantage in."

Indeed, Zynga has experienced tremendous growth in its live services business -- the industry jargon for in-game spending. The company's games are free to play, so it earns most of its money when players buy virtual items while playing. User pay bookings, which include in-game spending, amounted to $1.96 billion in 2020, up 52% over the previous year.

With this latest deal, Echtra Games will be working in partnership with Zynga's NaturalMotion Studio to develop a new role-playing game (RPG) for cross-platform play. The RPG genre is very popular worldwide and plays to the strengths of Echtra, where its development team has previous experience working on one of the best-selling RPG franchises in the industry with Activision Blizzard's Diablo.

Double the value of Zynga?

"We see an organic opportunity to more than double the value of our company," Gibeau said on the recent earnings call. Releasing more cross-play experiences is one piece of its broader growth strategy. Zynga also sees further growth in live services, advertising, and international expansion opportunities.

Investors will want to watch for new releases in 2021. Zynga entered the year with the broadest lineup of live service games in its history. Its recent launch of Harry Potter: Puzzles & Spells is expected to contribute meaningfully to operating results in the near term. New cross-play experiences could begin releasing later this year, keeping Zynga on course to emerge as one of the top gaming companies in the industry.