Please ensure Javascript is enabled for purposes of website accessibility
Log In Help Join The Motley Fool
Free Article Join Over 1 Million Premium Members And Get More In-Depth Stock Guidance and Research
By Neha Chamaria - Mar 8, 2021 at 11:15AM

Shares of Caterpillar (CAT -2.42%) soared 18.1% in the month of February, according to data provided by S&P Global Market Intelligence. If January offered investors a glimpse of what's happening within the company, February was all about positive macro developments that set the blue chip stock on fire.

Caterpillar bulls got their first kickoff on Jan. 29 when the company topped estimates on its fourth-quarter revenue and earnings, and management sounded optimistic about 2021 given a better-than-expected recovery in most end markets, particularly construction.

Come February, encouraging signs started to show up for Caterpillar from all sides. To start, commodity prices showed no signs of slowing down. Copper prices, for example, hit highs not seen in ten years in February, spurring hopes of higher spending from mining companies and more sales for Caterpillar's resource industries segment.

Likewise, oil prices soared and topped $60 per barrel last month, which bodes well for Caterpillar's energy and transportation (E&T) segment. Coincidentally, Caterpillar also completed its acquisition of the Weir group's oil and gas business in February just as oil prices started to rally, giving investors a feel that the deal might have been perfectly timed. 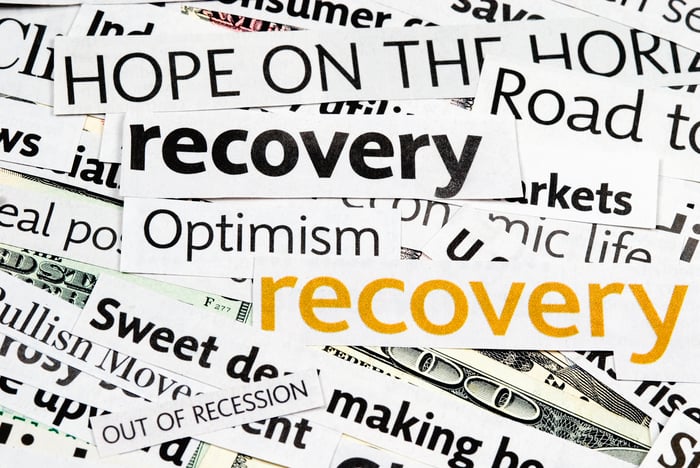 Caterpillar shares got another shot in the arm on Feb. 19 when Caterpillar's rival, Deere & Company (DE -4.06%), announced its first-quarter earnings. Deere didn't just double its Q1 net income but also upgraded its fiscal-year 2021 earnings outlook by a wide margin on the back of strong demand from agriculture and construction sectors.

Meanwhile, COVID-19 vaccination rollout fired up hopes of a faster economic recovery, as did expectations from President Joe Biden's proposed $2 trillion infrastructure plan. In mid-February, Biden held talks with labor union leaders to discuss America's infrastructure. In his premeeting speech, Biden remarked how the nation was "far behind the curve" when it comes to infrastructure, and how important it is to rebuild it to "make ourselves competitive in the 21st century."

As the world's largest construction-equipment manufacturer, Caterpillar is set to be one of the biggest beneficiaries of an infrastructure spending program.

Caterpillar is considered a bellwether for the global economy, so it's encouraging that it expects stronger volumes and higher sequential margin in the first quarter. The latest industry statistic is also hugely encouraging: the Institute for Supply Management's Purchasing Managers Index (PMI), a key indicator of manufacturing activity in the U.S., hit a three-year high in February. Top that with a surge in oil prices, which is excellent news for Caterpillar's largest segment, and there are enough reasons to justify the stock's recent rally to all-time highs.