Please ensure Javascript is enabled for purposes of website accessibility
Log In Help Join The Motley Fool
Free Article Join Over 1 Million Premium Members And Get More In-Depth Stock Guidance and Research
By Adria Cimino - Mar 9, 2021 at 6:00AM

There are two reasons not to worry.

You probably know at least one person who has struggled -- or is still struggling -- to get a coronavirus vaccine. Pfizer (PFE 0.50%) and Moderna (MRNA 4.12%) began shipping their coronavirus vaccines around the United States late last year. But in many places, there are more individuals seeking vaccination than available doses.

President Joe Biden recently made a move that should solve the problem. He ordered enough Pfizer and Moderna vaccine to fully immunize nearly every American. That sounds like bad news for any other vaccine maker hoping to enter the U.S. market in the coming months. But Novavax (NVAX 12.13%) CEO Stanley Erck says that won't be a problem for the biotech company. 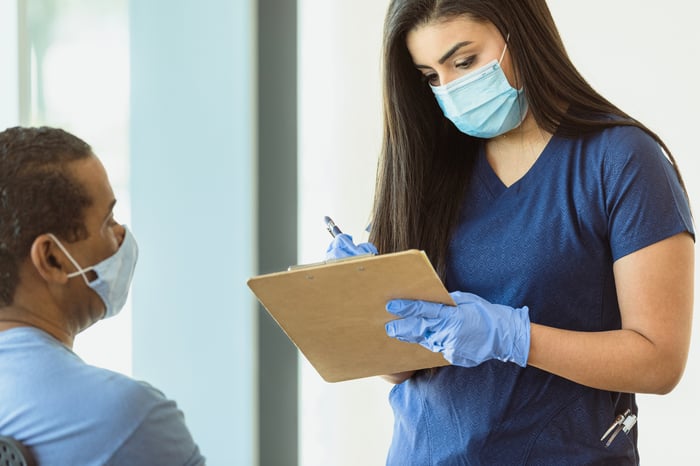 "There's plenty of need for the vaccine in the U.S. and, you know, it's a big world," Erck told CNBC in an interview. Erck also mentioned Novavax's supply agreement with the U.S., which was signed last July.

So, that supply agreement means Novavax will find a spot in the U.S. market -- even if the country ends up saving some of the doses for later use. And Novavax's efforts to win supply agreements internationally mean it won't depend on only one market.

Let's take a look at the numbers to see exactly how much Novavax stands to gain in 2021. First, let's consider deliveries to the U.S.

Last year, the U.S. granted Novavax $1.6 billion in return for 100 million doses of vaccine. In the company's recent earnings call, Erck offered an update. Novavax now plans to deliver 110 million doses to the U.S. by July. Of course, that will depend on regulatory authorization. Novavax expects to complete its Emergency Use Authorization request during the second quarter of this year.

Meanwhile, rivals Pfizer, Moderna, and most recently Johnson & Johnson are shipping enough doses to meet the U.S. government's goal of full vaccination for all by the end of the summer.

But that's OK. It doesn't matter whether Novavax's doses are used immediately or saved for later. If the U.S. Food and Drug Administration authorizes the vaccine candidate, Novavax can immediately begin shipping this eventual product in the U.S. It will have a chance to prove itself. And that's key. It's a step toward winning future orders from the U.S. government.

Internationally, Novavax is also securing its position. The company won orders for about 200 million doses of vaccine outside of the U.S. Customers include Canada, the U.K., Australia, New Zealand, and Switzerland. Sales in these and potentially other countries can boost Novavax's position in the worldwide market. Novavax also signed an agreement to provide more than 1 billion doses to COVAX; that's a global initiative to guarantee fair access to vaccines to all countries.

And Novavax's manufacturing capacity may help it stand out -- in the U.S. and abroad -- in the long term. The company is ramping up to produce more than 2 billion doses annually as of the middle of this year. By comparison, Moderna expects to produce between 700 million and 1 billion doses this year.

The revenue picture also looks bright for Novavax. The company hasn't said how much it's charging for its vaccine. But we can use the price paid by the U.S. as a guide: That's $16 a dose. And that totals about $4.8 billion for U.S. and international orders to be delivered this year. This is significant for a company that doesn't yet have product revenue. (The COVAX deal isn't included in the calculation above, since pricing may be considerably lower for some countries. Novavax didn't provide financial details. In any case, this deal can only add to revenue estimates.)

Erck isn't worried about Moderna's and Pfizer's market dominance in the U.S. -- and he's right not to be. Novavax's contract with the U.S. offers the biotech the opportunity to eventually enter that market and carve out share there. And the company's manufacturing capacity may offer it an edge in both the U.S. and elsewhere over the long term. So it's logical to be optimistic about Novavax's chances for success in this multibillion-dollar market.