Ammo shoots its stock price in the foot with a poorly timed stock offering.

Shares of Ammo (POWW 6.35%) -- the little ammunition manufacturer that came out of nowhere at the start of 2021, first doubling its market capitalization, then tripling, then nearly quadrupling it -- are falling today. Shares are down 14.2% in 11:05 a.m. EST trading after Ammo announced plans to raise $100 million from a stock offering.

But give Ammo credit: It got the order right. First, announce strong guidance for future numbers. Then, after the stock price has risen, cash in.

In today's announcement, Ammo says it will sell 20 million shares for $5 apiece, raising an even $100 million "before deducting underwriting discounts and commissions and estimated offering expenses." The company could even raise a bit more than that -- $15 million more -- if underwriters exercise their overallotment options to buy 3 million more shares.

The company says it will use the money "for general corporate purposes and working capital purposes, including debt reduction and capital expenditures ... [and possibly] potential acquisitions." 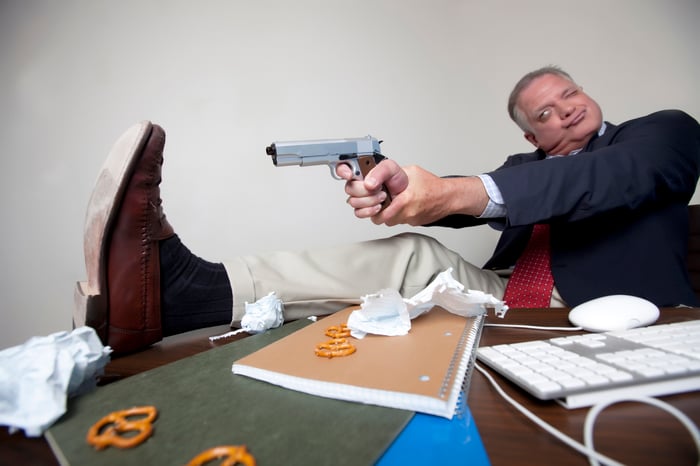 Investors aren't thrilled with the news, and it's not hard to see why. Ammo stock closed at $6.78 per share last night, and the company's decision to sell up to 23 million shares for $5 represents a 26% discount to what shareholders thought their shares were worth less than 24 hours ago.

The stock offering also promises to dilute existing shareholders out of more than 25% of their ownership interest in the company. And yes, the company will get cash for the stock sale, making each share of the company a bit more valuable in consequence. But investors who remember Ammo stock selling for nearly $10 a share barely a month ago have to be wondering right now: Wouldn't it have been a better idea to do this stock offering in mid-February, at a higher price, and with less dilution?

I think that's a very fair question to ask.