The ammunition maker's fiscal second-quarter report was excellent, but its guidance and upcoming moves are what investors should focus on.

Ammunition manufacturer Ammo Inc. (POWW -2.02%) scored yet another direct hit with the fiscal 2022 second-quarter results it reported after the close on Nov. 15, with strong beats on the top and bottom lines. Revenue exploded upward, while earnings rose solidly.

But Ammo's past successes are only as good for investors as the strategy that management implements to use them as a springboard into the future. Right now, that future looks sunny. Here's what Ammo has in store, and why the long-term picture looks bullish. 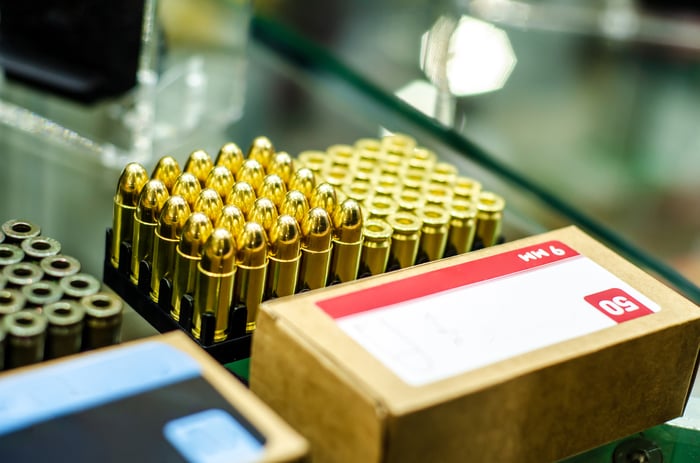 For its fiscal second quarter, which ended Sept. 30, sales soared 408% year over year to $61 million, beating the analyst consensus by nearly 11%. Adjusted earnings per share of $0.17 surpassed Wall Street forecasts by 70% and were a vast improvement over the prior-year period's $0.01 per share loss. With the ongoing ammunition shortage continuing through a second year, these gains are unsurprising, but they still demonstrate the company is executing successfully and leveraging the high demand.

Ammo's share price slid around 5% the day following its earnings report. This likely shouldn't be too concerning, however. After all, its results were outstanding and would arguably be difficult to improve on given its current scale and circumstances. Additionally, the company's earnings releases for at least four consecutive quarters have been followed by similar drops, suggesting a pattern that's unrelated to its actual performance.

What Ammo is planning in the near future

Ammo isn't resting on its laurels. Instead, it's taking active steps to build its recent wins into long-term growth. It currently has $185 million in order backlogs, which will be enough to drive strong revenue gains for at least several more quarters. It has also inked a deal with Federal Premium -- another ammunition manufacturer and a subsidiary of Vista Outdoor (VSTO -3.20%) -- under which it will sell brass casings to Federal, and Federal will in return supply it with primers, a key component of ammunition.

Vista is also gaining ground after delivering strong results for its fiscal second quarter with "high demand across all calibers of ammunition" being one of the drivers of its success, according to management's comments during the earnings call. "Our ammunition business was up 65%," the CFO said. Ammo will tap into Vista's success as well with its alliance, which is set to run for five years.

Expanding its manufacturing operations has already yielded gross margin improvements: Its margin expanded from 10.7% a year ago to 43.0% in its most recent quarter. The new high-tech factory it's building in Manitowoc, Wisconsin, is "on time and under budget," according to the CEO, and it should start operating in summer 2022. As a new initiative, the company has already begun acquiring automated manufacturing equipment to reduce labor expenses, claiming the facility "will be the most automated ammo building or plant in the country."

Ammo is also directing some energy toward strengthening its recently acquired online firearms and ammunition marketplace, GunBroker.com. It was a major firearms buying and selling hub before Ammo took over, though it was notoriously plagued by difficulties, including a near-total absence of customer support, payment interface troubles, and a hair-trigger moderation system that sometimes permanently banned even high-rated, long-term customers with little warning and a difficult appeals process.

Ammo says it's working to keep the positives of GunBroker.com while smoothing out the issues and adding new features. During the earnings call, CEO Fred Wagenhals said GunBroker has signed up to 50,000 new users a month since it was acquired. Among the current projects designed to increase user numbers are an improved credit card payment tool, several possible loyalty program variations, and -- tentatively -- enabling the auction site's users to pay using Bitcoin.

GunBroker was almost certainly a strongly accretive acquisition for Ammo. It contributed $16.8 million to revenue during the fiscal second quarter, its first full quarter as an Ammo subsidiary. It's also providing a "growing mix of high margin marketplace revenue," according to company President Rob Goodmanson, and thus adding to the rising margins noted above. Since GunBroker is an online marketplace for small third-party sellers, it has very low overhead compared to profits, with sales tax, shipping, and other expenses covered by the users.

Why Ammo's strategy will probably continue racking up bullseyes

Rather than just continuing to crank out bullets to profit from the ammunition shortage, Ammo appears to be trying to push the envelope on innovative ways to maximize its growth. These include the heavier use of automation at its new Wisconsin factory and its efforts to improve the operations of GunBroker.com. The possible introduction of cryptocurrency payments could have a positive impact, too. As Goodmanson noted, "there seems to be a very high correlation between gun owners and alternative currencies."

While Bitcoin integration is only being investigated at this point, it once again shows Ammo's flexibility and determination to find fresh avenues to improve its business model. Acceptance of Bitcoin would likely open the door to other major cryptocurrencies, a strategy with investment-style profit potential that goes beyond the value of merely adding a new payment method.

Ammo's year-over-year revenue and earnings gains were impressive, but its energetic pursuit of revenue growth, margin expansion, and new lines of business are the true bullish indicators. Right now, Ammo looks like a buy as a consumer discretionary stock offering plenty of long-term bang for your buck.