Accepting payment in cryptocurrency could actually assist the company's recovery.

Struggling movie theater company -- and standout meme stock -- AMC Entertainment (AMC -6.65%) announced on Nov. 12 that it's now accepting multiple types of cryptocurrency as payment. On the surface, this move might look moot in terms of its attempt to recover from its long decline. But there's more than meets the eye in this idea, which could actually help AMC's rebound if the response from moviegoers is positive. Here's why accepting these payment methods could be one more piece in the puzzle of getting the company back on track to profit.

AMC's debt and the "ape army"

One of the biggest challenges facing AMC Entertainment is the colossal debt burden on its balance sheet. Against the company's $1.6 billion in cash at the end of the third quarter, AMC reported on Nov. 8 it has $5.4 billion in outstanding debt, along with around $200 million in other liabilities, including leases. Shrinking this debt is obviously a priority in any attempt by AMC to get itself back on its feet, but at least one obstacle stands in its way. 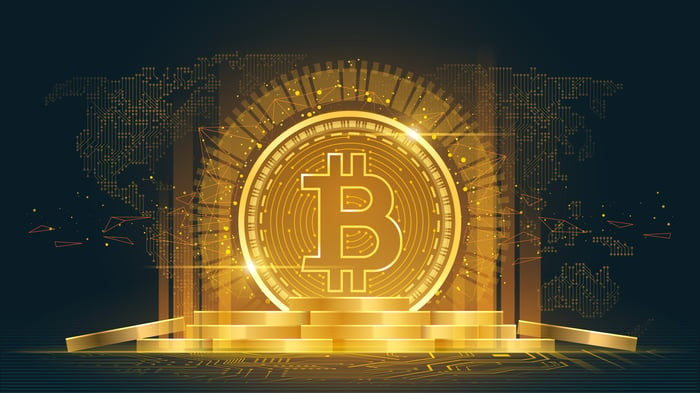 Both a potentially strong help and a grave hindrance to AMC's recovery is the mass of retail investors who currently own most of its outstanding shares. Rallying to the company earlier this year, determined to "save it" from short-sellers and hedge funds (suggesting that this investor group may not have a clear understanding of how short-selling works), this quixotic swarm of small investors first coordinated their short squeeze on the WallStreetBets Reddit subforum. There, they dubbed themselves "apes" or the "ape army," after the fictional simian army in the Planet of the Apes film series who are said to be "stronger together."

The Redditors quickly drove AMC's stock price up to incredible levels early last June, far above what the company's business performance would ordinarily merit. Aiming at a personal profit while pursuing a vague but heartfelt crusade to rescue AMC from the clutches of what they believed were nefarious short-sellers and "hedgies," they successfully carried out a short squeeze, as they had also recently done with GameStop. Over the following five months, they have mostly succeeded in keeping the price elevated above $35 per share, a remarkable achievement considering AMC's weak results.

However, while GameStop managed to benefit from its own ape-driven short squeeze, reaping a huge windfall of cash by selling a billion dollars' worth of stock in April, AMC was unable to follow suit. After it failed to get stockholder approval to sell 500 million shares, it successfully raised $587.4 million with the sale of approximately 11.6 million shares in early June. A subsequent effort on June 16 to secure shareholder authorization to issue 25 million more shares, which would have been worth somewhere around $1.38 billion at the time, was nixed by the ape army, who collectively held the majority stake (and who still continue to do so). Either fearing the dilution resulting or simply misunderstanding the situation, the retail investors cut off a potential lifeline that would instantly deliver a strong reduction of AMC's debt burden.

Could cryptocurrency add momentum to the turnaround plan?

Despite the lack of another big cash infusion, AMC is doing yeoman's work in its turnaround effort. With some big blockbusters back in theaters and getting moviegoers in brick-and-mortar seats in profitable numbers again, the company is increasing its revenue relatively strongly compared with the collapse of 2020. It is also trimming its losses, slashing Q3 net loss from 2020's $356 million to 2021's $114 million, or about 68%. Its net cash flow might even turn positive in Q4. While still far below genuine long-term viability, the gains are impressive in light of AMC's long previous slide toward bankruptcy. And with enough luck and good management, the company might eventually get back on the road to sustainable growth.

If stock issues are off-limits for increasing its "war chest" and paying down debt, AMC's new cryptocurrency policy could step in to help fill the breach. On Nov. 12, CEO Adam Aron tweeted that he had a "big newsflash." Elaborating, he said AMC now "proudly" accepts -- with an added "drumroll, please" -- several of the leading cryptocurrencies, specifically Bitcoin (BTC 0.18%), Bitcoin Cash (BCH -0.27%), Ethereum (ETH 0.84%), and Litecoin (LTC 0.03%). He also said the company will start accepting meme coin Dogecoin (DOGE -0.38%) next. Many of the cryptocurrencies he named rose on the news, as blockchain investors crave more real-world use cases for their digital currencies.

Superficially, adding a few new payment methods doesn't look too significant. Surely, some might argue, anyone paying in cryptocurrency could also have paid in cash, with a check, or with a credit or debit card, so where is the advantage? The answer is that many of WallStreetBets' apes are also from generations strongly interested in cryptocurrencies, such as millennials or the oldest cohort of Gen Z. It seems likely that at least some, and perhaps many, of AMC's retail investor fans and shareholders might opt to pay using cryptocurrency when they go to the theater.

Payments received in cryptocurrency differ from regular payments in that AMC can presumably choose to hold the virtual coins in its digital wallets rather than immediately converting them to cash. And if the cryptocurrency market has demonstrated anything, it is that at least the major cryptocurrencies, as opposed to the plethora of disposable "altcoins," inevitably increase in value over time -- sometimes gaining immensely in a short interval. The world leader among cryptocurrencies, Bitcoin, demonstrated this phenomenon over the past 12 months, skyrocketing more than 300% to a recent all-time high of around $67,000.

If AMC can gain a significant amount of cryptocurrency in payment for movie tickets, it could hold these digital assets in its wallet until they reach new all-time highs, potentially doubling or tripling its profits from those particular sales simply by having "diamond hands" (that is, holding and refusing to sell) for a few quarters before cashing out the cryptocurrencies. The volatility of digital currencies makes this strategy somewhat risky, but it could also be a way to "get more bang for its buck" on ticket sales.

Accepting cryptocurrency isn't a game-changer, but it could provide a little extra cash in AMC's quest to stop being no more than a meme stock, once again becoming a viable movie theater stock. The cryptocurrency ticket payment policy may represent another small but helpful step as AMC claws its way slowly back toward a more bullish future.