Analysts were already forecasting upside of nearly 60% for Ammo (POWW 1.22%) stock over the next year. But after the small ammunition company blew away estimates for its fiscal 2022 second quarter with sales that surged more than 400% year over year -- and raised its full-year guidance again -- Wall Street is going to need to update its outlook. 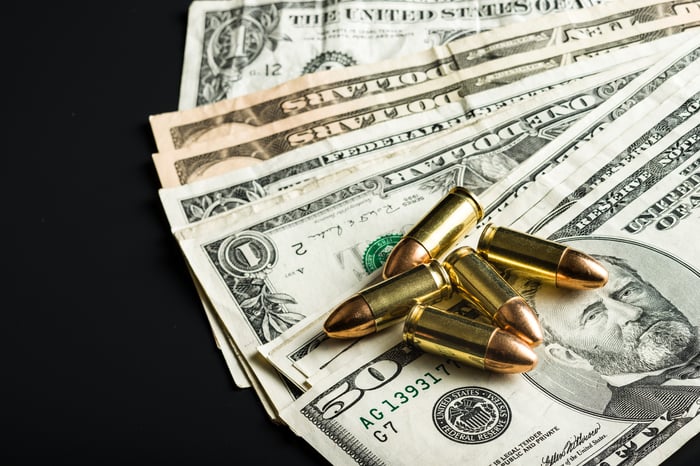 A record year for guns and ammo

Although the headline numbers across the firearms industry indicate a slowdown in gun sales, that's all relative. Sales may be lower now than they were last year, but 2020 was an unprecedented, record-breaking year for the industry, and 2021 is on track to be the second-highest sales year ever. In short, people are still buying firearms at a frenzied pace.

And since gun sales inform demand for ammunition, even a small manufacturer like Ammo is seeing record results. For the fiscal 2022 second quarter, which ended Sept. 30, net revenue was $61.0 million, up 408% year over year. Of that sum, $40.2 million came from ammunition sales, a massive jump over the $8.7 million of ammo it sold in the prior-year period.

Even with those stellar results, Ammo reported just a tenth of the sales Olin generated in the same quarter with its Winchester brand of ammunition. And Vista Outdoor generated $450 million from its ammunition division. Vista owns the industry-leading Federal brand and recently acquired both the Remington and HEVI-Shot brands too.

Yet Ammo's growth also underscores the opportunity that's available in this remarkable period for the firearms industry.

While gun manufacturers like Smith & Wesson Brands and Sturm, Ruger are seeing a slight slowdown from the foot-to-the-floor acceleration they experienced last year, the ammunition industry is still in the grip of a supply and demand imbalance. As soon as product hits store shelves, it's immediately bought out.

And it's not just ammo for small arms like pistols and revolvers but long guns as well. Hunting season is underway, and sporting goods stores are lamenting their inability to get ammunition and keep enough of it in stock.

Last year, Vista's Federal president took to YouTube to plead with customers for understanding as the company's plants were operating around the clock to produce all the ammunition they possibly could, though it still wasn't enough. Privately-held manufacturer Hornady has also asked for patience from customers. 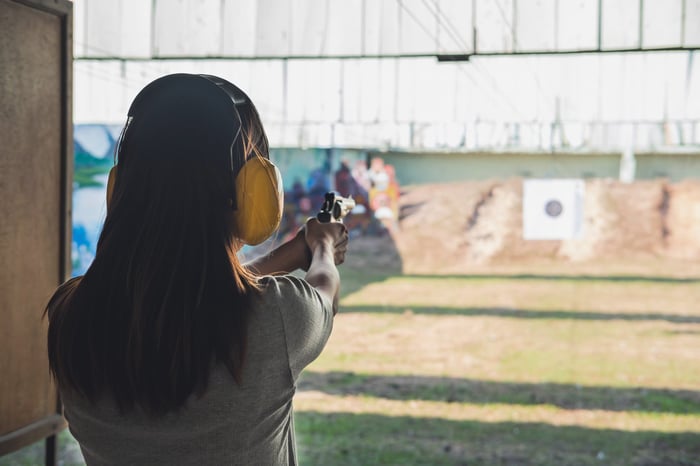 This unquenchable demand led Ammo to increase its full-year revenue guidance from $210 million to $250 million, and management raised its outlook for adjusted earnings before interest, taxes, depreciation, and amortization (EBITDA) from $70 million to $80 million.

Wall Street analysts, however, weren't forecasting that Ammo would reach $250 million in annual sales till the end of its fiscal 2023. Given that it's on course to achieve that a year early, analysts are going to have to adjust their outlooks, and their price targets on its stock will likely follow suit.

At its current price, Ammo trades at only 16 times this year's earnings expectations, which were set before the latest earnings release.

Even though Ammo stock has tripled over the past 12 months, the unprecedented consumer demand means there is still plenty of growth potential for this small ammunition maker.