The combination comes as GM works to transition to an all-electric lineup.

General Motors (GM 0.78%) has committed to $27 billion in electric-vehicle (EV) investments through 2025 as it plans to launch 30 new EVs worldwide by the end of that year. But prior to that pledge, the company had been grooming its Cruise subsidiary, which is dedicated to self-driving technology.

Today, GM's Cruise announced it is buying Voyage, a self-driving start-up initially focused on using the technology for senior citizens in retirement communities. Cruise is developing autonomous vehicles, including the bus-like Origin, to remove drivers and increase safety in city driving. 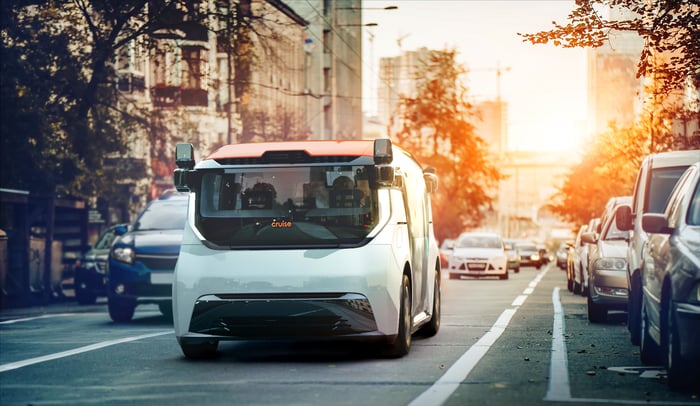 Voyage CEO Oliver Cameron, will become Cruise's vice president of product. Cameron said in a blog post that the additional resources provided by Cruise will allow Voyage to move beyond just retirement communities to "every possible demographic who stands to benefit from self-driving services." He added that based on his experience in the industry, Cruise, "with its advanced self-driving technology, unique automaker partnerships, and all-electric purpose-built vehicle with no human controls" is set up to become the industry leader.

Cameron said that Voyage can now offer Cruise the self-driving artificial intelligence it has developed, as well as its collision-mitigation and remote-assistance solutions. Cruise spokesman Ray Wert told CNBC that Cruise will look to move beyond retirement communities immediately, saying those areas of operations "are not on our immediate road map."