Please ensure Javascript is enabled for purposes of website accessibility
Log In Help Join The Motley Fool
Free Article Join Over 1 Million Premium Members And Get More In-Depth Stock Guidance and Research
By Rich Duprey - Mar 15, 2021 at 7:40AM

The global tobacco giant is working hard to convince you it means what it says.

Four years ago, Philip Morris International (PM 1.83%) declared it would pursue a "smoke-free future" in which one day it will be a cigarette-less company. Although critics dismissed the claim as a smokescreen, the global tobacco giant continues proving its sincerity in the attempt.

Last month, Philip Morris told analysts at its investor day conference that by 2025, more than half of its total revenue will come from smoke-free products, well ahead of its previous guidance. That puts the tobacco company on a path to no longer being a cigarette manufacturer sooner than many believed possible, so investors need to consider the implications for its achieving that goal. 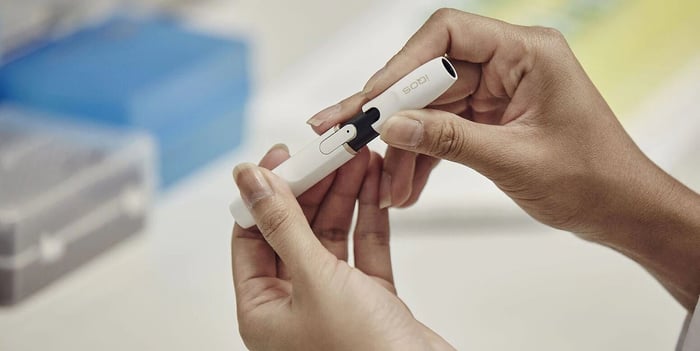 On one hand, Philip Morris' effort is a matter of self-preservation. While cigarette consumption in the U.S. has been in a secular decline for decades, global markets have also turned sour and the growth opportunities for smoking that existed at the time of its spinoff from Altria (MO 1.81%) in 2008 are severely diminished.

The World Health Organization noted in 2019 that although worldwide cigarette usage had dropped by around 60 million people between 2000 and 2018, that was mostly due to women who gave up smoking. Female cigarette usage dropped from 346 million to 244 million, a near 30% decline.

Men, though, actually increased their usage by 4%, rising from 1.05 billion to 1.09 billion, to account for 82% of the world's smokers. However, in 2019, WHO reported the number of male smokers dropped for the first time ever, and they expected 1 million fewer smokers by the end of 2020.

A burning drive to change

So it's not a surprise that Philip Morris began looking for a cigarette alternative, and its IQOS heated-tobacco electronic cigarette is the vehicle expected to deliver the greatest results of the transition to being smoke-free.

CEO Andre Calantzopoulos told analysts the tobacco giant was leading the way in tobacco-harm reduction, and "the product change and switching smokers out of cigarettes into less harmful alternatives is the biggest contribution we can make to society and public health."

While IQOS still uses tobacco to deliver nicotine to users, because it heats the tobacco and doesn't burn it, it's seen as a less harmful alternative. It creates a vapor rather than smoke, and smoke is where most of the damaging chemicals are found.

Philip Morris generated $6.8 billion in revenue last year from IQOS, or almost 25% of its total $28.7 billion in net revenue. Calantzopoulos says if you just look at the three regions where IQOS is most prevalent -- Asia, Eastern Europe, and the European Union -- it represents 35% of the total.

The next road forward

Now IQOS has been introduced into the U.S., potentially one of the biggest market opportunities along with China, and it earned a modified risk label from the Food and Drug Administration.

Altria, which is handling the manufacture, distribution, and sale of IQOS in the U.S., has slow-walked the rollout of the device. It's only in three markets so far, even though it's been approved for sale for a year. But with the next-gen IQOS device now available, Altria is planning on national availability this year, and Philip Morris says new innovations are coming to the device, including induction heating technology and mesh technology, which uses a metallic screen to draw tobacco flavor through.

Arguably the biggest opportunity may be in marijuana. British American Tobacco (BTI 1.85%) is trialing a cannabidiol (CBD) vape product in the U.K. and just signed a partnership with leading Canadian marijuana grower OrganiGram to develop CBD products.

Altria, of course, has had an ownership stake in Cronos Group for several years now.

If IQOS catches on here, and there's a good chance it will because of its modified risk designation, giving it a marketing advantage over competing products, rolling it into the growing legal weed market could be huge.

Seeing through the fog

What's clear, though, is that Philip Morris International is serious about its cigarette-free future, and with sales strong in almost every market it's in, the IQOS could deliver superior returns.

That should give investors the confidence this tobacco giant will be a solid investment for years to come, regardless of whether the company is seen as a cigarette company or not.