Please ensure Javascript is enabled for purposes of website accessibility
Log In Help Join The Motley Fool
Free Article Join Over 1 Million Premium Members And Get More In-Depth Stock Guidance and Research
By Manali Bhade - Mar 17, 2021 at 10:30AM

These two disruptive companies have long growth runways ahead of them.

The tech-heavy Nasdaq Composite has fallen by 5.5% in the last month. Investors are now expecting a faster U.S. economic recovery than they did previously, thanks to the passage of the American Rescue Act stimulus package and the rapid rollout of coronavirus vaccines. Naturally, in this environment, they have been more inclined to shift their investments toward cyclical stocks, rather than the growth and tech stocks that they favored when the situation looked bleaker.

But the recent tech sell-off has also created opportunities for savvy investors to buy fundamentally strong high-growth stocks at reasonable prices. If you have $5,000 that you don't expect to need anytime soon, then you might want to think about investing that cash in internet infrastructure company Cloudflare (NET -6.86%) and genome sequencing specialist Pacific Biosciences of California (PACB -2.35%). 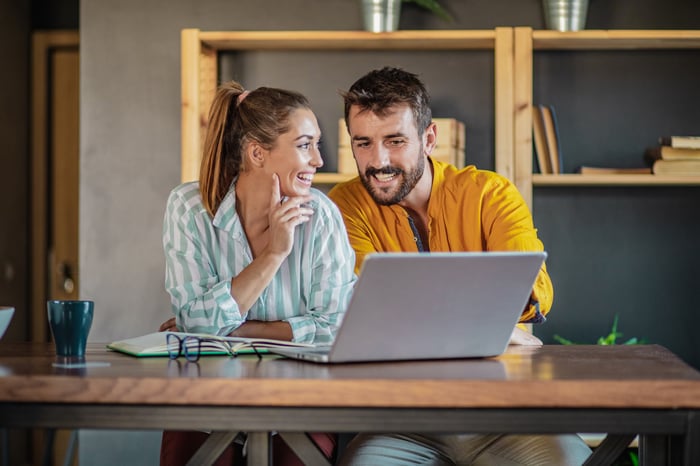 The case for Cloudflare

Cloudflare's content delivery network (CDN) and scalable edge computing platform have dramatically increased the speed and reliability of internet traffic. At the same time, its cybersecurity services are protecting websites from distributed-denial-of-service (DDoS) attacks while ensuring safe browsing experiences for users. The success of these offerings is evident considering that the company currently supports almost 16% of global internet traffic.

One thing that differentiates Cloudflare from its competitors is its intense focus on developers, which comprise a sticky user base. When developers like a platform, they also become proponents for its adoption across their enterprises. The company has also leveraged its broad customer base of over 3.5 million for timely feedback, identifying new security challenges, and testing new products before selling them to paying enterprise customers. Unlike legacy CDN players such as Akamai (AKAM -0.47%) and Limelight Networks (LLNW -4.12%), which scale up their presence mostly by adding costly hardware, Cloudflare's software-defined network (SDN) approach helps it expand at much lower costs.

Thanks to the continual flow of new products and services on its efficient underlying network, Cloudflare's total addressable market (TAM) is now set to surge from $32 billion in 2018 to over $100 billion in 2024. While previously focused more on individuals and small businesses, the company is now increasingly shifting upmarket toward larger enterprise customers. Its recently launched Cloudflare One offering -- a network-as-a-service solution that combines enterprise networking tools and zero-trust security services -- will further enable Cloudflare to benefit as large enterprises increasingly shift to the cloud. (Zero-trust security is a model that doesn't assume that any user, whether inside or outside the organization's perimeter, is legitimate, and instead continuously  rechecks everyone's credentials and authorizations to access data and applications.)

The success of Cloudflare's strategy is evident in its fiscal 2020 financial performance. Revenues jumped by 50% to $431 million. But what's more impressive is that the company's selling, general, and administrative (SG&A) and research and development expenses rose by 46% and 21%, respectively. With its expenses growing at a slower rate than its top line, the company's non-GAAP operating margin is  inching closer to management's long-term target range above 20%. Finally, although the company is currently operating at a loss, management has forecast that it will be break-even by the first quarter of fiscal 2022.

Cloudflare's dollar-based net retention rate at end of the fourth quarter was 119%, so it's earning 19% more from the cohort of customers it had as of the end of fiscal 2019. But more interestingly, the company's remaining performance obligations rose 75% year over year and 12% sequentially to $384 million.

Cloudflare also has a strong balance sheet with over $1 billion in cash and short-term investments. The company is trading at a 12-month trailing price-to-sales (P/S) multiple of over 55, which is steep. However, considering its huge market opportunity and its enviable position, investors can profit from buying Cloudflare's stock even at these elevated valuations.

The case for Pacific Biosciences of California

You might have already been aware of gene sequencing systems provider Pacific Biosciences of California's 400% share price rise in 2020, a meteoric gain that is continuing in 2021. While shares rose an additional 97% this year, PacBio stock has surrendered some of that altitude, but is still up nearly 30% for the year.

While the current standard short-read genome sequencing technology suits many use cases, it has come up short in helping researchers identify mutations in certain parts of the genome, and it's believed that some of these may be associated with conditions such as Alzheimer's disease and autism. However long-read gene sequencing technology, the next frontier emerging in medical genetics and the specialty of PacBio's Sequel II series sequencers, may be able to more effectively map those areas of the genome. PacBio has estimated its total addressable market -- which includes sample prep, long-read sequencing, and data analysis -- to be more than $20 billion.

With its low-cost and highly accurate Sequel II long-read sequencer, and the recently launched Sequel IIe which comes with extra computational and data storage capacity, the company is well-positioned to capture a significant portion of this rapidly expanding market. Despite Covid-19 affecting the company's pace of installation, PacBio installed 35 new Sequel II and Sequel IIe systems in the fourth quarter, which took its total installed base to 203 at end of 2020.

While the resurgence in COVID-19 cases still poses a risk, increased viral surveillance across the world is also emerging as an opportunity for PacBio in the near-term. In early 2020, the Centers for Disease Control and Prevention (CDC), Laboratory Corporation of America (LH 0.41%), and PacBio together developed a whole-genome HiFi sequencing assay that is now being used to rapidly identify new COVID-19 variants. Increasing demand for this assay from public health organizations, commercial laboratories, and academic researchers could boost the adoption of Sequel II/IIe systems.

PacBio's recent financial performance has not been exceptional, but it is trending in the right direction. Fourth-quarter revenues were down 3% year over year to $27.1 million, but that did top analysts' consensus estimate of $25.4 million.  The company is well-capitalized with total cash and investments of $319 million,  and its balance sheet will only become stronger after an additional $900 million investment from SoftBank.

PacBio is trading at a 12-month trailing P/S of 78, which might seem excessive, particularly considering Illumina's (ILMN -1.64%) P/S of 18.6. However, considering PacBio's dominant position in the nascent-yet-fast-evolving long-read genome sequencing segment, I think this company can soar much higher in 2021.