Please ensure Javascript is enabled for purposes of website accessibility
Log In Help Join The Motley Fool
Free Article Join Over 1 Million Premium Members And Get More In-Depth Stock Guidance and Research
By Adam Levy - Mar 17, 2021 at 9:31AM

And that advantage will enable the telecom giant to lead the market throughout the 5G era.

Verizon Communications (VZ -0.20%) and AT&T (T 1.43%) just spent tens of billions of dollars each on new spectrum licenses for their 5G networks. They're both chasing after T-Mobile U.S. (TMUS 1.64%), which has accumulated a huge trove of mid-band spectrum licenses thanks in large part to its merger with Sprint last year. And even after the larger competitors' huge hauls at the FCC's C-band auction that ended in January, they still won't have as much mid-band spectrum as T-Mobile.

Not only that, but T-Mobile's current position has several big advantages over AT&T and Verizon. 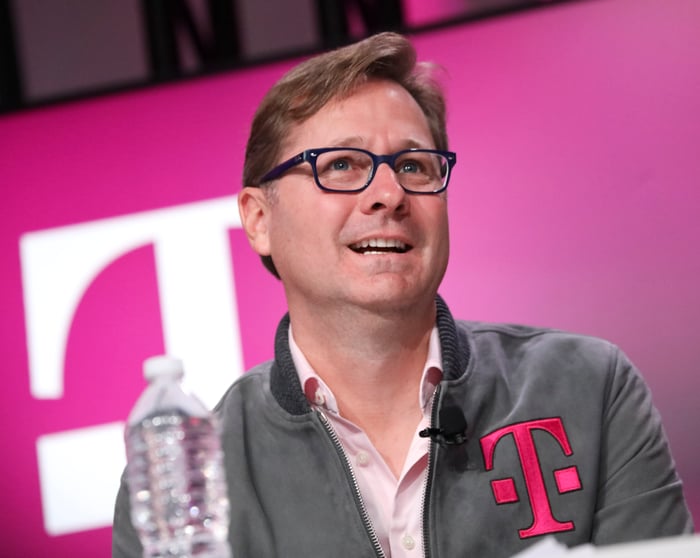 Clearing that much spectrum isn't cheap

Not only did Verizon and AT&T spend $45 billion and $23 billion, respectively, to secure new C-band spectrum licenses, but they'll also have to spend billions more in order to use them.

The spectrum wavelengths the telecom companies just bought are currently being used by several satellite companies to transmit TV and radio signals. In order to use them, the new purchasers will have to help foot the bill to move those transmissions to a nearby spectrum band. Analysts expect auction winners to spend about $14 billion to clear the airwaves.

Deploying and upgrading equipment is even more expensive

Both AT&T and Verizon outlined their plans to deploy their new spectrum holdings at their analyst days earlier this month. AT&T expects to spend between $6 billion and $8 billion from 2022 to 2024 to put the C-band spectrum in use. Verizon will spend $10 billion over the next three years.

But T-Mobile contends it could be even more expensive for the competitors. Management pointed out during its analyst day that C-band airwaves can only travel about 65% as far as its 2.5 GHz spectrum and about half as far as AWS spectrum (between 1.7 GHz and 2.2 GHz). As a result, building a network primarily with C-band spectrum will require 1.5 times as many cell sites as T-Mobile's 2.5 GHz and up to twice as many sites as the carriers' AWS.

Verizon believes it can use its existing infrastructure without having to add any new sites because its network already has substantial overlap. Regardless, the carrier will have to touch each cell site to upgrade equipment to support the new spectrum and 5G network. Time will tell whether the existing cell sites provide enough coverage with the C-band spectrum for consumer demand.

Verizon and AT&T already have a lot of debt on their balance sheets, and they're going to add a lot more. In order to pay for the spectrum licenses, clearing costs, and the cost to deploy the spectrum, they're each taking on billions of new debt.

Verizon procured a $25 billion bank facility good for one year to help cover its payments to the FCC, and it said it'll tap the debt market as soon as possible to cover the expenses over the long term.

AT&T has a similar deal in place for about $15 billion. Management expects its debt levels to increase by $6 billion by the end of the year, but it remained committed to its dividend during its analyst day.

By comparison, T-Mobile expects it can fund its spectrum deployment internally as it realizes synergies from the Sprint merger. Part of T-Mobile's plans to generate synergies from the merger is through decommissioning Sprint's wireless network. In order to do that, it has to visit cell sites to remove equipment. But if it's already sending someone, it's a small marginal expense to add new 5G network equipment.

While AT&T and Verizon increased their capital expenditure guidance, T-Mobile decreased its guidance on the top end. It now expects between $9 billion and $10 billion in capex per year in the medium to long term.

AT&T and Verizon still have a long, expensive road to travel in order to catch up to T-Mobile in 5G. That gives T-Mobile's management a lot of confidence it can remain the leader in 5G connectivity throughout the lifespan of the era and win over more customers with lower expenses as a result.