Please ensure Javascript is enabled for purposes of website accessibility
Log In Help Join The Motley Fool
Free Article Join Over 1 Million Premium Members And Get More In-Depth Stock Guidance and Research
By James Brumley - Mar 17, 2021 at 9:00AM

On the surface they seem like mere courtesy announcements -- press releases meant to be read and then forgotten. Discount retailer Target (TGT -2.57%) is launching two new private-label consumer goods brands in its stores. But it's a retailer; selling stuff to shoppers is what it does.

Current and prospective shareholders would be wise to note the news in its proper context, though. The company's private-label brands are a huge reason the smaller chain has been able to hold its own against bigger rivals like Walmart (WMT 1.25%) and Amazon. Now it's got a couple more of them.

It matters simply because there's more to Target's house brands than just putting cost-competitive goods on its store shelves for the sake of consumer choice. 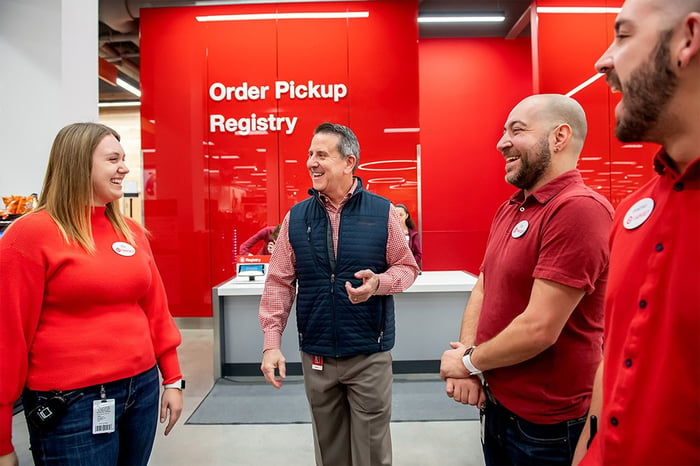 If you're a regular Target shopper there's a good chance you're already using a Target-made product without even realizing. Cat & Jack children's clothing, Heyday electronics accessories, and Opalhouse home decor are just three of the few dozen brands Target owns and operates.

Don't dismiss the development. They may seem low-impact on the surface, but house brands are big business for Target. The company doesn't disclose how much of its current revenue comes from its owned brands, but at one point pegged the figure at 30% of sales, jibing with other estimates tendered in the meantime.

It could be more now, given how many of its current brands have only launched in recent years, with several of them turning into billion-dollar franchises. Good & Gather is one of four owned brands driving more than $2 billion in annual revenue for the company and another six are generating at least $1 billion worth of yearly business for Target.

Direct and indirect upsides for Target

Target's willingness to cultivate so many successful in-house brands isn't complicated. Above all else, the goal is improving its bottom line.

And private-label goods are undoubtedly achieving this goal for the store chain. Effective profit margins vary from one product category to another. But, broadly speaking, retailers' gross margins on their own goods can be anywhere from 20% to 50% better than profit margins on comparable goods from national brands. Gross margin, operating margin, and net income margin are all historically better for Target than they are for Walmart despite Walmart's size-based edge on its smaller rival. 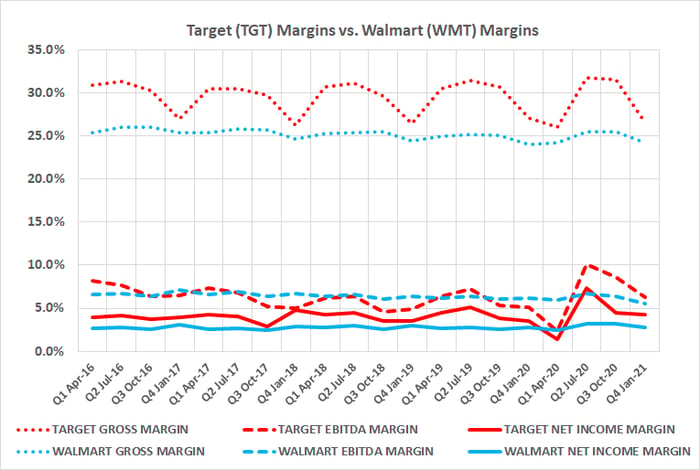 House brands make a big, unquantifiable difference for Target, too. The retailer designs and develops its own goods to fill in holes in its selection of inventory on its shelves.

Take its All in Motion line of athletic apparel launched at the beginning of last year as an example. It was meant to be an affordable alternative to premium brands like lululemon athletica, which exploded on the heels of a growing fitness craze. There's not a lot out there in this category that's affordably accessible and looks similar, particularly for women, and even less of it is available in plus sizes. That new brand drove $1 billion worth of sales in 2020.

Yes, the pandemic helped. More helpful, however, was the wide range of size selection that Lululemon has been criticized in the past for not offering.

That's not to suggest every owned brand the discount chain is or is going to be a similarly smashing success. Each private-label product is another exclusive that attracts consumers to its stores, however, where they often choose to purchase something else while there. Yes, these in-house brands are that much of a draw.

A couple more owned brands don't make Target shares a buy, particularly without knowing the sort of traction Favorite Day and Mondo Llama are going to get with shoppers. That doesn't mean Target isn't a name worth owning, though. Rather, the retailer is a buy because its entire private-label program is a smashing success. It's arguably the best in the business, in fact, using house brands to their upmost potential as a profit engine as well as traffic draw.

Now it's got two more of these levers to pull.