Please ensure Javascript is enabled for purposes of website accessibility
Log In Help Join The Motley Fool
Free Article Join Over 1 Million Premium Members And Get More In-Depth Stock Guidance and Research
By Demitri Kalogeropoulos - Mar 18, 2021 at 9:00AM

An upcoming boost makes these income stocks even more attractive.

For some dividend stocks, it's never a question of whether investors will get an annual payout raise. The mystery instead revolves around the size of the yearly income boost.

Dividend Aristocrats have increased their commitments for at least 25 consecutive years, and Dividend Kings boast 50 years of consecutive increases. Those mutli-decade track records essentially remove the risk of a surprise cut so that investors can count on steady growth through a wide range of selling conditions.

With that in mind, let's look at why you might want to buy two members of these exclusive dividend clubs, PepsiCo (PEP 1.34%) and Procter & Gamble (PG 1.78%), before their latest hikes impact portfolios over the next few weeks. PepsiCo has been sending out dividend checks since 1965 and is on the cusp of becoming a Dividend King, which requires a streak of at least 50 years of consecutive raises. Its 2021 boost will mark the 49th straight year of increases.

The snack and beverage giant just wrapped up an impressive fiscal 2020 that saw it outperform in both the soda and the packaged foods niches. Pepsi's snack food division contributed strong growth, as usual, but the company also only endured a modest drop in beverage volume, in contrast to peer Coca-Cola (KO 1.85%). In mid-February, CEO Ramon Laguarta credited the results to "... our diversified portfolio, agile supply chain ... and strong marketplace execution." 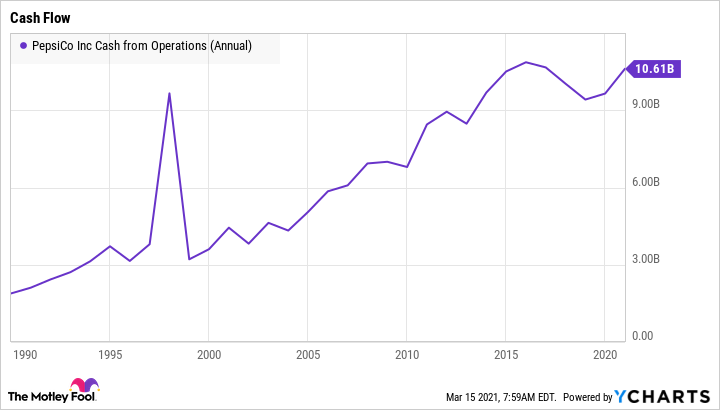 Pepsi recently announced that its annual payout will rise 5% to $4.30 per share, beginning with its June payment. A weak stock price in early 2021, meanwhile, has pushed that yield up above 3% in what should be considered a nice bonus for income investors.

Procter & Gamble has a grip on the industry

Procter & Gamble usually announces its annual payout boost in April, around the time it posts its fiscal third-quarter results. But investors don't have to wait for that report to buy this dividend giant.

P&G was posting strong operating results even before the pandemic boosted demand for many of its consumer staples. The company extended those positive trends through the crisis, and in the process outperformed peers like Kimberly-Clark (KMB 2.12%). Organic sales jumped 8% in P&G's last outing and are expected to rise for the full year following a spike in fiscal 2020.

Sure, growth will slow as the pandemic threat fades over the next few quarters. But P&G is expecting a persistent lift in many of its core niches, including laundry care and home care, as people continue to spend more time around the house. But thanks to industry-leading profit margins and cash flow, this business can deliver attractive returns even with weaker growth.

P&G generated $10 billion of operating cash in the past six months, compared to $8.5 billion a year earlier. That success gives management the flexibility to announce a hike in April that should be at least as big as last year's 6% hike.

The increase will mark P&G's 65th consecutive year of annual dividend hikes. That kind of streak is only possible because of its dominant hold on several consumer staples niches, including paper towels, detergent, and shaving care.