Please ensure Javascript is enabled for purposes of website accessibility
Log In Help Join The Motley Fool
Free Article Join Over 1 Million Premium Members And Get More In-Depth Stock Guidance and Research
By Leo Sun - Mar 20, 2021 at 8:30AM

Which digital advertising platform has more room to grow this year?

Alphabet (GOOG 2.15%) (GOOGL 2.37%) and Pinterest (PINS -1.40%) both generate most of their revenue from ads, but the tech companies operate very different business models.

Pinterest carved out a niche in the social networking market with its virtual pinboards, which are used to share interests, ideas, and hobbies with other users. Its pinboards often feature fashion, home design, cooking, and travel ideas, and a growing number of companies are uploading their entire catalogs to Pinterest as "shoppable pins" to reach those social shoppers. Over the past 12 months, Alphabet's stock price has rallied nearly 90%, but Pinterest's stock price surged nearly 500%. But can Pinterest continue to outperform Alphabet this year? Let's dig deeper to find out.

Alphabet and Pinterest both experienced slower revenue growth in fiscal 2020 as companies purchased fewer ads throughout the pandemic.

Alphabet experienced a more severe slowdown than Pinterest, but the growth of its cloud business partly offset its sluggish ad sales in the first half of the year. Analysts expect Alphabet's growth to rebound sharply this year, while Pinterest's growth is expected to remain broadly stable.

Alphabet generated 80% of its revenue from Google's ads in 2020. That core business stabilized in the second half of the year, and its total ad revenue rose 9% for the full year. Its total cloud revenue, which accounted for 7% of its top line, soared 46%.

Alphabet's operating margin also expanded year over year, from 21% to 23%, as it spent less money throughout the crisis. As a result, its earnings grew 19% for the full year, and analysts expect its earnings to increase another 19% in 2021 and grow 17% in 2022.

Pinterest generated nearly all of its revenue from ads in 2020. Its monthly active users (MAUs) grew 37% year over year to 459 million in the fourth quarter, while its average revenue per user (ARPU) increased 12%.

Pinterest still isn't profitable on an annual GAAPbasis, but its adjustedEBITDA margin expanded from just 1% in 2019 to 18% in 2020. As a result, its adjusted EBITDA nearly quadrupled for the full year, and its non-GAAP earnings more than tripled. Analysts expect Pinterest's non-GAAP earnings to jump 102% in 2021 and rise another 47% in 2022.

Alphabet and Pinterest both seem poised to generate robust growth for the foreseeable future, but investors should always be skeptical of analysts' forecasts. 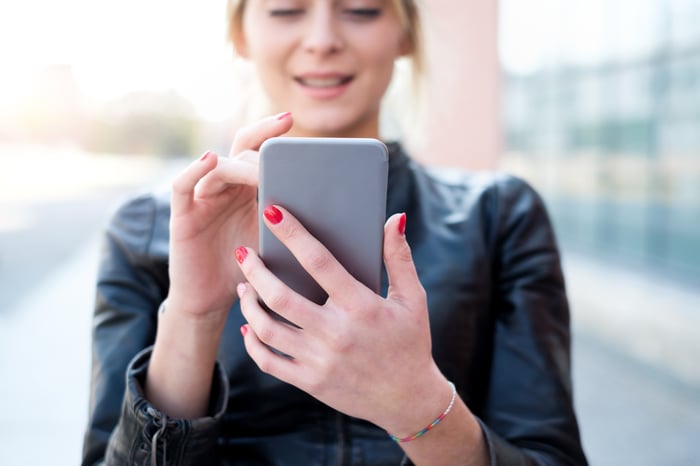 Several headwinds could cause Alphabet to miss Wall Street's estimates. The tech giant still faces antitrust challenges in the U.S. and Europe, which could result in big fines or tighter restrictions on its search and advertising businesses.

Apple's upcoming update for iOS14, which will let users opt out of data-tracking apps, could impair Google's ability to display targeted ads on iOS devices. Google Cloud could also struggle to keep pace with its much larger rivals, Amazon Web Services (AWS) and Microsoft Azure, in the cloud market.

Pinterest's ads could also be affected by Apple's iOS update. It could also struggle to maintain its momentum, especially in the higher-growth international markets that account for 79% of its MAUs, as Facebook's Instagram and other platforms offer more "social shopping" features.

Pinterest also attributed some of its MAU growth last year to stay-at-home measures during the pandemic, which caused more people to seek out ideas for cooking, design, and other hobbies on its pinboards. That tailwind could dissipate after the pandemic passes.

If we account for Pinterest's ability to expand as an e-commerce platform, its resilience against copycat apps (like Facebook's short-lived Hobbi), and its insulation against the misinformation and censorship controversies plaguing other social networks, I believe its premium valuations are justified.

Yet if we look at Alphabet's antitrust challenges, its privacy and fake news controversies, and its ongoing flops in adjacent markets (such as Google+ and Allo), then the stock doesn't seem cheap.

I think Alphabet is still a good long-term investment since people will still likely be using its core services a decade from now. But I think Pinterest is a better overall buy today because it has the potential to disrupt and straddle the social media and e-commerce markets. It certainly isn't a stock for queasy investors, but I believe it will outperform Alphabet again this year.