Please ensure Javascript is enabled for purposes of website accessibility
Log In Help Join The Motley Fool
Free Article Join Over 1 Million Premium Members And Get More In-Depth Stock Guidance and Research
By Daniel Foelber - Mar 20, 2021 at 7:30AM

As technology struggles, other industries are gaining Wall Street's favor.

The S&P 500 gained over 16% last year, which is impressive all things considered. However, the disparity between winners and losers was jarring. Most of the market's gains came from just a few industries. Tech and consumer discretionary stocks, which make up roughly 40% of the S&P 500, gained an average of over 30% in 2020. By contrast, energy stocks fell over 35%, airlines nosedived, and plenty of industries vastly underperformed the broader indexes. This year, it's the opposite. 2020's island of misfit toys became all-stars practically overnight. Oil stocks are dazzling. Airlines are surging -- and some are even hitting fresh all-time highs.

While the Nasdaq crashed, ConocoPhillips (COP -2.37%), Waste Management (WM -2.65%), and Starbucks (SBUX -3.31%) soared. With that, let's break down what's driving these dividend stocks to new heights. 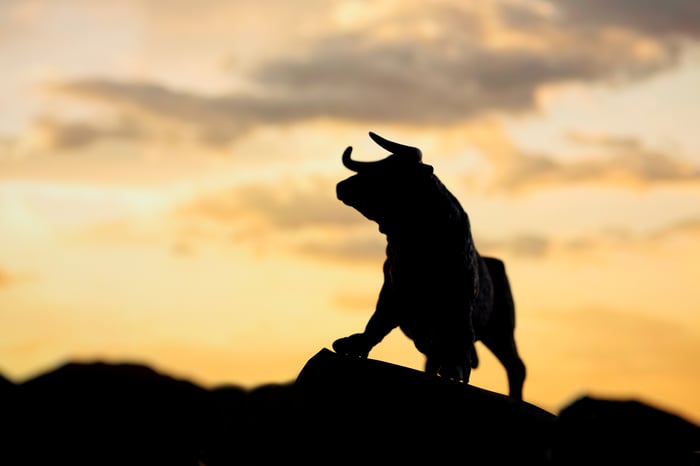 Love them or hate them, oil stocks tend to march to the beat of their own drum. For the time being, many oil barrels lay empty as producers cut supply in response to lower demand. But demand is picking back up, and fast. Air traffic has improved to its best levels since the onset of the pandemic. The economy is reopening as the vaccine rollout kicks into hyperdrive. The payday has been a long time coming for ConocoPhillips. Unlike many of its competitors that are saddled with high operational costs and too much debt, ConocoPhillips runs a tight ship and has one of the most efficient portfolios in the business.

The company's strong balance sheet allowed it to buy assets when others were selling. In October, it announced the acquisition of Concho Resources in an all-stock deal that brings the company's average cost of supply down to just $30 per West Texas Intermediate (WTI) barrel -- the U.S. benchmark. WTI prices currently sit around $65, giving ConocoPhillips plenty of room for upside. But in the oil industry, upside alone isn't good enough. To protect against downside, ConocoPhillips has reduced its costs and streamlined its portfolio. Including the acquisition of Concho, it expects 2021 operating costs of $5.5 billion and 2022 operating costs of $6 billion ($1 billion less than 2019). Most of that will go into Lower 48 production where ConocoPhillips and Concho are leading players. After gaining its footing, the company expects $40 per barrel to be the price at which it can break even on its operations and pay the dividend. Considering the average price during 2020 was around $40, this is a pretty nice baseline.

ConocoPhillips is the largest U.S. pure-play producer, and with that focus comes risks. However, it's better positioned than its peers to handle that risk and has a 3% dividend yield to boot. 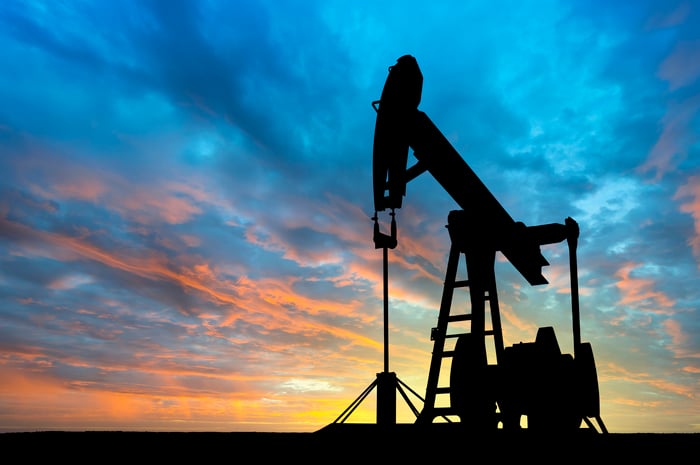 If you live in the U.S., there's a good chance that Waste Management collects, transports, and disposes of your trash. More online shopping means more boxes and more recycling business for Waste Management. The company probably handles the waste needs of your favorite restaurant and many other businesses you like, too.

Waste Management's long-term growth has been tied to a growing population that consumes more stuff. During the pandemic, business for Waste Management's industrial and commercial customers slowed, and that meant less waste. However, residential and recycling revenues improved nearly enough to offset all of the commercial and industrial declines. Add it all up and the company's 2020 revenue was just 1.5% lower than in 2019.

For an industrial stock, Waste Management is about as reliable as you can get. That reliability has led to years of market outperformance and dividend growth backed by solid free cash flow (FCF). This year, Waste Management expects to grow revenue 11% and generate record-high FCF of $2.3 billion, $975 million of which will be used to fund its dividend and up to $1.35 billion of which can be used to buy back shares. The company plans to increase its annual dividend for the 18th consecutive year to $2.30 per share for a yield of around 2%. 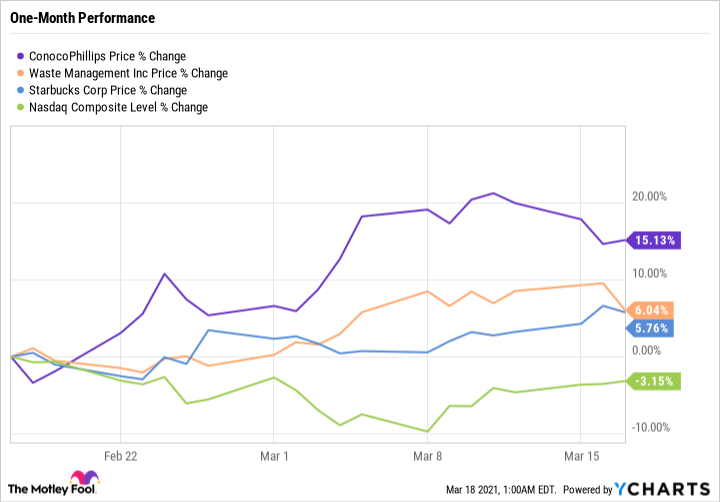 Starbucks, which trades on the Nasdaq exchange, did just fine during the sell-off. In fact, its shares hit a fresh all-time high on Tuesday. Like other great companies, shares of Starbucks can fall victim to short-term thinking and drop hard. Hard as in down to a painful $50 a share during the peak of the sell-off last March. But there's reason to believe Starbucks' best days are ahead.

At its core, Starbucks' growth stems from opening new stores or generating more sales from existing stores. Sales can grow from a higher volume of transactions and a higher average ticket price per transaction. The pandemic pressured Starbucks to shutter many of its coffeehouse-style stores and focus on drive-thru instead. Fewer stores meant less overall revenue, but the massive experiment shed light on the power of the drive-thru for increasing volume, and its mobile app for increasing average ticket sales.

Average tickets have risen more than 17% over the past three "pandemic" quarters. Ninety-day active Starbucks Rewards members are now close to 22 million, 15% higher than a year ago. Mobile ordering saves a ton of time, which makes customers happy and encourages more visits. It also makes it easier to customize drinks, spend more money, and collect more rewards. Many of the new stores that Starbucks plans on opening over the next few years will be conducive to grab-and-go ordering. Starbucks had one of its worst years in recent history and its first quarterly loss in seven years. But it exits the pandemic with a high-octane growth strategy that should make it a star for years to come. Starbucks yields 1.7%, giving investors a little something extra while they wait for its strategy to develop.

3 Surefire Value Stocks That Could Keep Surging in 2022