Please ensure Javascript is enabled for purposes of website accessibility
Log In Help Join The Motley Fool
Free Article Join Over 1 Million Premium Members And Get More In-Depth Stock Guidance and Research
By Daniel Foelber – Jun 19, 2020 at 9:42AM

Both have proven track records for income and growth over the long term.

Stocks that combine income and growth can sometimes be hard to find. But once you do find them, an effective strategy can be to simply buy the stock, sit back and relax, and let the investment work for you.

Here are two completely different stocks you can buy and hold forever. Putting Chevron (CVX 5.61%)on this list may raise a few eyebrows, but the company has demonstrated the effectiveness of its prudent approach to a volatile industry. Unlike other oil and gas companies that borrow too much money, pay dividends they can't afford, or overly spend, Chevron is one of the few energy companies with a solid balance sheet and an attractive dividend.

Chevron's strategy has also proved more successful than other majors like ExxonMobil (XOM 5.28%) in that Chevron's superior operational efficiency and lower spending has led to a healthier company that generates more shareholder value.

Another point to mention is Chevron's savvy negotiating skills. After Occidental Petroleum (OXY 4.25%), a much smaller company, outbid Chevron for Anadarko, a company roughly the same size as Occidental, Chevron simply walked away from the deal and pocketed a $1 billion breakup fee from Anadarko. Occidental shares were sent tumbling as outraged investors criticized Occidental for chasing assets at the expense of more debt, whereas Chevron's restraint looks to be a brilliant move given the current state of the oil and gas market.

It's also worth mentioning that Chevron's debt-to-capital and debt-to-equity ratios, two key financial metrics, are the lowest of the oil majors. 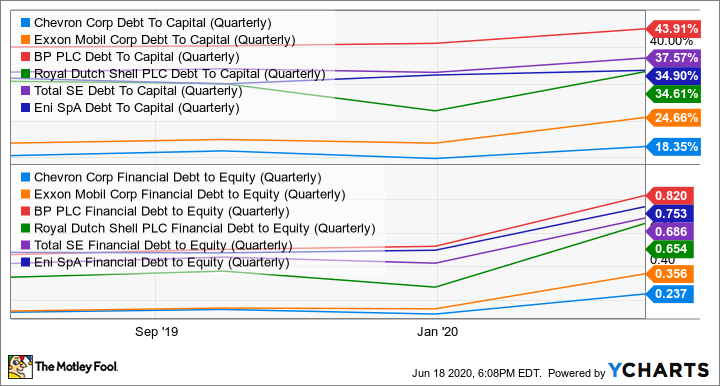 In late March, Chevron decided it would cut spending by 50% in the largest onshore U.S. oilfield, the Permian Basin, as well as cut total 2020 spending by 20%. Chevron also halted its $5 billion share buyback program. Such precautions help ensure that Chevron retains its financial strength while affording its dividend, which yields 5.6% at the time of this writing.

Starbucks (SBUX 1.61%) investors have enjoyed a fivefold increase in both dividends and in stock priceover the past ten years.

Starbucks is now a household name around the world. However, the company recently announced a grim short-term outlook for the rest of 2020 in addition to the closing of 400 stores in the U.S. and Canada over the next 18 months.

So while the headlines could lead you to believe that Starbucks is closing stores, it's really shifting from large low-volume stores to maximizing transactions through leaner solutions with fewer costs and overhead. In the works are pilot programs for Starbucks stores that exclusively offer curbside pickup, as well as stores specifically intended for urban customers on foot to pick up their coffees and go.

The company's decision to lean into the needs of customers during the pandemic pairs nicely with the growth of mobile ordering and paying. Although the short term will be challenging for Starbucks, the company has proven it has staying power over the long term. With a 2.1% dividend yield, it pays for investors to wait as the new strategy unfolds.

There's no denying that Chevron and Starbucks are a motley duo, but both companies have a track record of navigating uncertainty well. Chevron's prudence and restraint have benefited its balance sheet and given it a significant advantage over its competitors. Starbucks' ability to take a chance on emerging markets where others have failed and admit that its business model needs a revamp are signs that the company possesses a rare balance of ambition and humility.

For these reasons, it could be worth picking up a few shares of Chevron and Starbucks and holding them over the long term.