Please ensure Javascript is enabled for purposes of website accessibility
Log In Help Join The Motley Fool
Free Article Join Over 1 Million Premium Members And Get More In-Depth Stock Guidance and Research
By Rekha Khandelwal - Mar 24, 2021 at 7:31AM

Renewable energy sources will indisputably play a key role in meeting the world's future energy needs. What isn't as clear is which companies will pass the test of time to benefit from this growth in renewables. Two renewable energy companies that look promising right now are fuel cell maker Plug Power (PLUG -0.72%) and solar panel manufacturer Canadian Solar Inc. (CSIQ 2.19%). One of the two stocks looks like a better buy right now. Let's see why.

Both Plug Power and Canadian Solar have an operating history of around two decades. However, the two companies generated divergent results over this period. While Plug Power continues to struggle to become profitable, Canadian Solar has been generating positive profits for years. 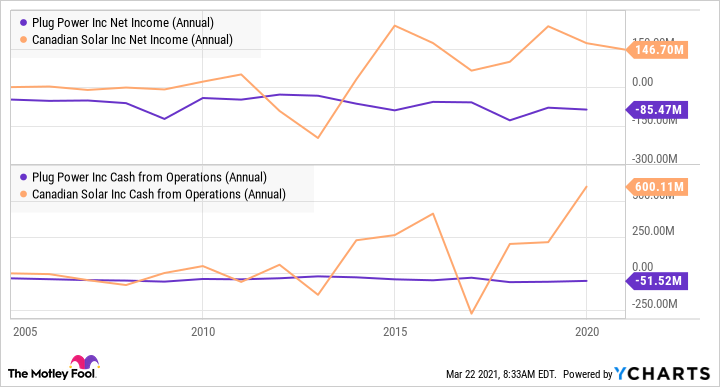 Similarly, as the graph above shows, while Plug Power is still burning cash, Canadian Solar has largely been generating positive operational cash flows for nearly a decade.

To be fair, Plug Power is an early entrant in a nascent industry. By comparison, the solar panel manufacturing industry is well beyond its introduction stage. Considering that the two companies operate in quite different segments of the renewable energy space, it would be sensible to look at their prospects, in addition to their past performance. The astronomical rise in Plug Power's stock can be attributed to investors' positive view about the company's prospects.

The recent enthusiasm for hydrogen can partly be attributed to Europe's push for clean energy. The European Union envisions hydrogen to account for around 14% of Europe's energy mix by 2050. This push for hydrogen may create huge opportunities for hydrogen fuel cell makers such as Plug Power.

Solar energy also has bright prospects. The share of solar energy in global electricity generation is expected to rise from a mere 3% now to roughly 20% by 2050. That bodes well for panel manufacturers such as Canadian Solar.

Notably, the growth in hydrogen use should also help drive solar energy's growth. That's because companies are increasingly looking at "green hydrogen" -- produced through electrolysis of water using energy from renewable sources -- as the preferred choice. Right now, more than 95% of hydrogen in the U.S. is produced using natural gas. This process isn't environment-friendly, jeopardizing the very motive of promoting hydrogen use.

At the company level, Canadian Solar is taking several steps to grow its operations. It has an attractive projects backlog and is looking at vertical integration to lower its costs. Additionally, its projects development business is doing quite well. Canadian Solar expects its annual projects sales gigawatts to nearly double by 2024. 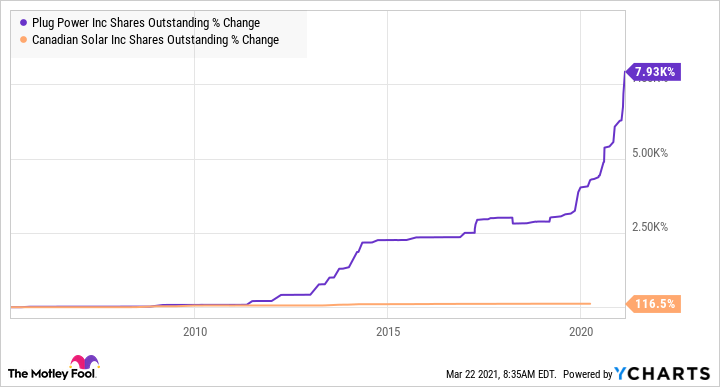 Plug Power's big promises fueled the phenomenal rise in its stock price last year. The company's management utilized the opportunity and raised $1.3 billion from public offerings in 2020, compared to the $158 million it raised in 2019. Investors may continue to face similar dilution in the future too.

Attaining profitability remains Plug Power's biggest challenge. The company hasn't been able to generate profits, even when the costs of its key products have come down significantly over the years. There don't seem to be enough catalysts to help Plug Power attain its ambitious target of $200 million in operating income by 2024. Looking at the company's history, it may miss this target.

What's more, Plug Power recently announced that it will need to restate its financial statements for the last three years due to accounting errors. Though it suggested that there won't be a major effect on its cash position or commercial agreements, investors are concerned. Finally, there is a risk of slower-than-hoped-for adoption of hydrogen fuel cells.

Hydrogen fuel cell technology is promising but faces several risks. Plug Power stock is trading at a high valuation and tends to be volatile. It has already fallen 48% off its high this year. By comparison, Canadian Solar is trading at a more attractive valuation compared to its peers. Canadian Solar's strong performance and its better valuation, combined with solar energy's bright prospects, make it a better buy right now.