Please ensure Javascript is enabled for purposes of website accessibility
Log In Help Join The Motley Fool
Free Article Join Over 1 Million Premium Members And Get More In-Depth Stock Guidance and Research
By John Ballard - Mar 24, 2021 at 7:10AM

Despite lower-than-expected revenue growth, the company is well positioned for a strong recovery.

Nike (NKE 0.58%) stock has more than doubled over the last year as investors anticipate a strong rebound from the pandemic. But shares retreated after the company reported lower-than-expected revenue growth for the fiscal 2021 third quarter.

Nike reported revenue growth of just 3% year over year, which is not the pace of recovery investors were expecting. In the previous quarter, revenue growth accelerated to 9%, and management's previous guidance had called for revenue to advance by a low-teens rate for fiscal 2021 (ending in May).

Is Nike losing momentum? Absolutely not. The one thing investors should know is that management is still sticking to its full-year guidance as underlying demand for the Nike brand continues to remain at a high level. Here's what impacted Nike in the last quarter and why this top sportswear brand remains a compelling growth stock. 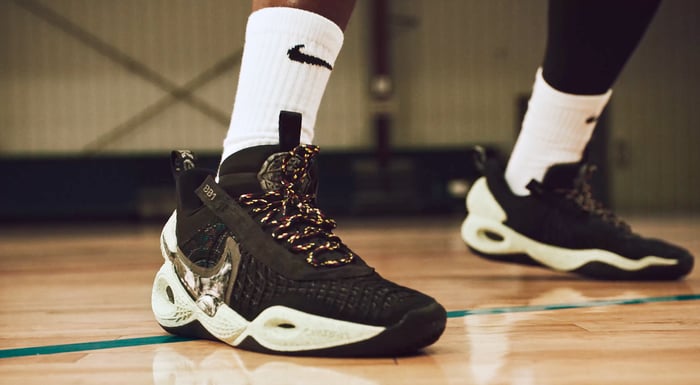 Blame it on COVID-19

The deceleration in Nike's revenue growth wasn't an isolated case. The spike in COVID-19 cases toward the end of 2020 caused port congestion, transportation delays, and container shortages that impacted other retailers.

Nike said inventory replenishment was delayed by more than three weeks in North America, and the company also suffered further store closures across the Europe, Middle East, and Africa (EMEA) region. As a result, revenue declined by 10% in North America and 4% in EMEA year over year.

The standout was the Greater China segment. Once again, the region showed why it's a promising growth opportunity. Revenue growth accelerated to an impressive 51% year over year, up from the previous quarter's 24%. China is Nike's third-largest geography by revenue, and it helped save what would have been an even worse report.

The good news is that management still expects fiscal 2021 revenue to increase at a low- to mid-teens rate, reflecting strong demand in the marketplace. Nike will face an easy comparison in the fiscal fourth quarter, given the collapse in revenue in the year-ago period when stores were closed. Management expects revenue to be up approximately 75% in the current quarter to cap off a volatile fiscal year.

Why Nike is still on track for a recovery

The silver lining of the quarter was the improvement in gross profit margin, which ticked up to 45.6% compared to 44.3% in the year-ago quarter. Despite higher costs related to supply chain challenges, management credited growth from the higher-margin digital sales channel for the improvement.

The digital business was up 54% year over year excluding currency changes. This is on top of a 36% increase in digital sales during the year-ago quarter.

Nike's ability to serve the wave of consumers migrating to e-commerce over the last year has been impressive. With $38 billion in trailing 12-month revenue, the company has enormous resources to invest in technology and infrastructure to meet demand. Management credited its investment in analytics for enhancing its pricing capabilities in North America, driving a higher gross margin in the region.

What to watch in the near term

The performance of Nike Digital remains a significant growth driver. Management says digital sales are still on track to reach 50% penetration across company-operated and partnered retail channels over time.

Fueling online demand is Nike's continued innovation in new performance shoes. It's using more sustainable materials, which led to the success of the recent Cosmic Unity shoe. Another recent release is the React Escape, a shoe specifically designed for new female runners, which shows how Nike continues to invest to widen its addressable market to bring more people into sports.

Investors should also watch the return of live sports and how that impacts demand as the year progresses. Sporting events are crucial opportunities for Nike to market its brand, and the company didn't have those opportunities last year. But it will in the near term, starting with March Madness.

Under the difficult circumstances of COVID-19, Nike has performed really well for a consumer-discretionary company. It should be clicking on all cylinders once the pandemic is behind us.