Please ensure Javascript is enabled for purposes of website accessibility
Log In Help Join The Motley Fool
Free Article Join Over 1 Million Premium Members And Get More In-Depth Stock Guidance and Research
By Rick Munarriz - Mar 26, 2021 at 11:53AM

Disney's original theme park will open after a 413-day drought, but the resort has even bigger plans for the years to come.

The original Walt Disney (DIS 3.51%) gated attraction is still five weeks away from reopening, but the world's largest theme park operator is already starting to think big. Disneyland in California hosted a media briefing on Thursday, unveiling plans to expand its theme park, lodging, retail, dining, and entertainment offerings on the eastern and western ends of the resort.

It will be easier said and financed than done. Disney hosted the media event to begin drumming up support for the project, as it will require some zoning flexibility from Anaheim city officials that the existing resort doesn't presently have. The expansion could be a game changer on many levels, but will it won't put Disneyland on par with Disney World in Florida in terms of being a profit center for the media giant. 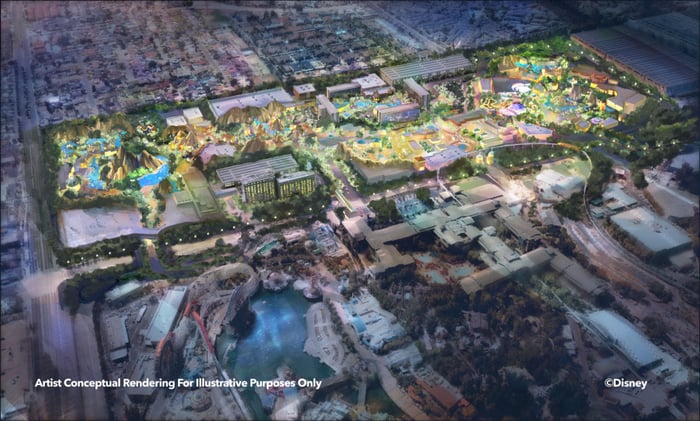 Disney didn't elaborate on the concept art that shows new theme park attractions and additional hotel rooms and retail offerings. It did emphasize that the new theme park areas wouldn't be a third gate. Rumors have been circulating for ages of Disneyland adding a water park or perhaps a third smaller theme park, but this won't scratch either itch.

The new rides would naturally increase the capacity at Disneyland and Disney's California Adventure. Big-ticket additions are strong draws, so naturally Disney would benefit from not just having room for more guests but also having the flexibility to charge more for its product.

Increasing hotel capacity is also a luxury, expanding on its three existing on-site resorts. Guests staying on-site tend to spend more, and we're not just talking about the overnight rates. They're going to eat most of their meals within the resort, and since they are often less frequent visitors to the resort than locals they will probably spend more on keepsakes and other merchandise.

Unfortunately for Disneyland it doesn't have the same kind of space that Disney World does with its more than 40 square miles of largely undeveloped land. Even with a large chunk of Disney's Florida real estate in protected wetlands it has the optionality to carry out its wildest expansion plans. Disneyland is landlocked by third-party hotel operators and other businesses that have been capitalizing on the resort's popularity for decades. It may be able to use a "mixed use" designation to build up parking garages on top of retail establishments but there is only so much it will ever be able to achieve with its limited acreage.

It's still great news for Disney, especially as its theme parks serve not only as one of the media stock's most lucrative profit centers when the going is good but also as a platform to promote its other assets. It will take months of red tape and years of eventual development before the concept art is realized, but it will be worth it in the end for Disney shareholders.