Please ensure Javascript is enabled for purposes of website accessibility
Log In Help Join The Motley Fool
Free Article Join Over 1 Million Premium Members And Get More In-Depth Stock Guidance and Research
By James Brumley - Mar 26, 2021 at 7:45AM

Look for some of the biggest names in the business to also go through the most meaningful evolutions this year.

Last year was a big one for online shopping. The coronavirus pandemic made it tough (if not impossible) for many to step foot in most brick-and-mortar stores. As a result, Digital Commerce 360 estimates e-commerce sales in the United States alone reached $861 billion in 2020, which was up 44% from 2019's levels. Amazon (AMZN 1.24%) was the e-commerce player that best managed to take advantage of the shift largely because it started the new year well equipped to handle the large expansion in online spending.

But what does 2021 hold for the e-commerce industry now that vaccines are being distributed and businesses and consumers have a better grasp of how to manage this new paradigm?

Here's a rundown of three top e-commerce names to watch in 2021. Not all are necessarily the largest e-commerce stocks as measured by market cap. But all three are positioned to produce the biggest and best growth stories this year. 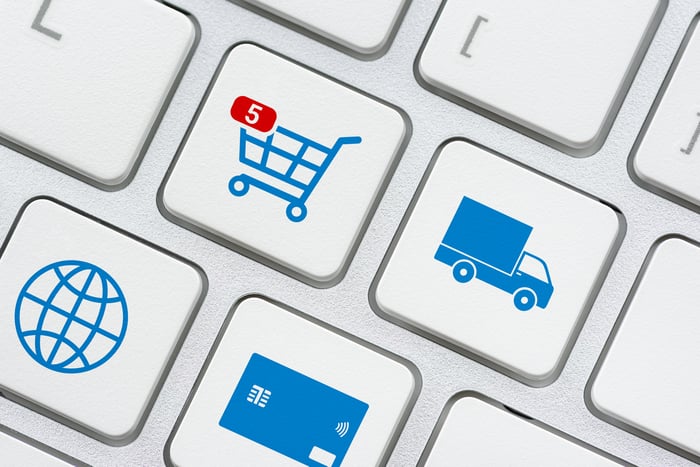 OK, Amazon is the biggest and most potent stand-alone online shopping player around and that does make it a key name to watch. But it's not an outfit worth watching just because of its size. It's going to be interesting to see what Amazon does in 2021 with its newfound reach after 2020's surge in online consumerism.

Remember, Amazon didn't focus on innovation last year as much as it did on doing whatever it took to just keep filling orders. Now it's got time to make the most of any new customers it garnered in 2020. And what's on the radar for this year? Look for the company to ramp up delivery automation and efficiency.

It was buried by pandemic headlines, but last year Amazon expanded its pilot program of autonomous robots delivering packages to people's homes. Called "Scouts," these six-wheeled drones traverse sidewalks on their own, dropping off packages without the need for a big truck and a human driver. Amazon also opened dozens of localized and regional facilities in 2020 as part of plans to establish 1,000 neighborhood delivery hubs in the foreseeable future.

It remains to be seen how well Amazon can manage its complex distribution network, but if all goes as planned, we should see the e-commerce company become cost-effectively capable of doing almost anything this year.

Not all of that revenue is e-commerce revenue, of course. While the big brick-and-mortar retailer doesn't offer specifics, multiple third-party estimates peg the company's yearly e-commerce business only on the order of $40 billion. Walmart's online sales continue to grow rapidly enough, however, that Amazon should at least be concerned. Though the COVID-19 contagion boosted this figure, last fiscal year's 79% increase in the company's U.S. e-commerce revenue extends a yearslong streak of double-digit-percentage progress.

Much like Amazon, Walmart's 2020 online shopping effort was mostly a knee-jerk response to an explosion in demand, allowing the retailer no time to optimize that growth. That's changing this year. The company's already warned shareholders it's planning a 50% increase in capital expenditures this year, up to $14 billion, with much of that figure earmarked for its supply chain, automation, and technology.

That's a fairly vague spending plan, and CEO Doug McMillon didn't clarify matters much when explaining during the fourth-quarter earnings call how investors should view the company as "hundreds of distribution and fulfillment centers, thousands of stores and clubs" that function "in a hybrid fashion, automated where they should be based on volumes and complemented with onsite market fulfillment centers or offsite MFCs." It is clear, however, Walmart is putting its e-commerce operation's proverbial pedal to the metal.

Finally, add Shopify (SHOP 12.45%) to your list of e-commerce stocks setting up the industry's biggest stories of 2021.

It's far from being a bully within the business. With a market cap of "only" $142 billion, it's about a third the size of Walmart and a tiny fraction of Amazon's behemoth capitalization of $1.6 trillion. Shopify also produced a relatively modest 2020 top line of $2.9 billion.

What this company lacks in size it makes up for in growth. Last year's revenue nearly doubled 2019's tally, pushing the company well out of the red and into the black on an operating and GAAP basis. The analyst community believes it's going to remain solvent, too, modeling sales growth of nearly 40% this year, followed by growth of more than 30% next year when per-share earnings should reach a record of $4.95.

The key to this impressive progress is the business model. Shopify isn't trying to beat Amazon or Walmart at their own games. Rather, where Walmart and Amazon strive to expand their online selling platforms with more of their own goods or listings from third parties, Shopify helps businesses build their own e-commerce platforms that aren't beholden to the two big powerhouses in the arena. Staples, Dressbarn, and Molson Coors are just some of the brands that have tapped Shopify to improve their online stores.

These merchants are certainly more than ready for such an alternative, too.

Amazon's third-party sellers have been frustrated for years with restrictive and sometimes self-serving decisions. But, with no viable alternative, they've largely stuck with Amazon. Now they're finding this alternative, making 2020 a critical mass of sorts for Shopify. This year should mark a major turning point now that even more of these sellers can safely experiment with other e-commerce platforms.

2 Reasons to Buy Shopify Before Its Stock Split, 1 Reason to Buy After