Please ensure Javascript is enabled for purposes of website accessibility
Log In Help Join The Motley Fool
Free Article Join Over 1 Million Premium Members And Get More In-Depth Stock Guidance and Research
By Jason Hawthorne - Apr 4, 2021 at 8:23AM

Do the math before you sell stocks based on proposed legislation.

For years, large pharmaceutical companies have been deliberately booking losses or meager profits in countries with high tax rates while shifting earnings to countries like Ireland where they will be charged considerably less. That's in part why the 1.1% corporate tax makeup of the U.S. gross domestic product is lower than any other Group of Seven (G7) nation.

The recent infrastructure bill proposed by President Biden takes aim at that, proposing a 28% corporate tax rate -- halfway back to the rate in 2016 -- and a 21% global minimum rate. It would also end the tax exemption for corporations on the first 10% of earnings produced internationally.

For Pfizer (PFE 3.59%), Johnson & Johnson (JNJ 1.75%), and Merck (MRK 1.58%), the bill could spell trouble for the easy profits being booked abroad. The Biden proposal seeks to eliminate that loophole, with the hope that removing the incentive will get more U.S. companies to manufacture products at home.

Pharmaceuticals make a particularly easy target, as only 28% of the facilities making active ingredients for this country are actually in the U.S. For shareholders, it might be time to calculate just how much this could cost the drug-making giants if the bill gets signed into law. 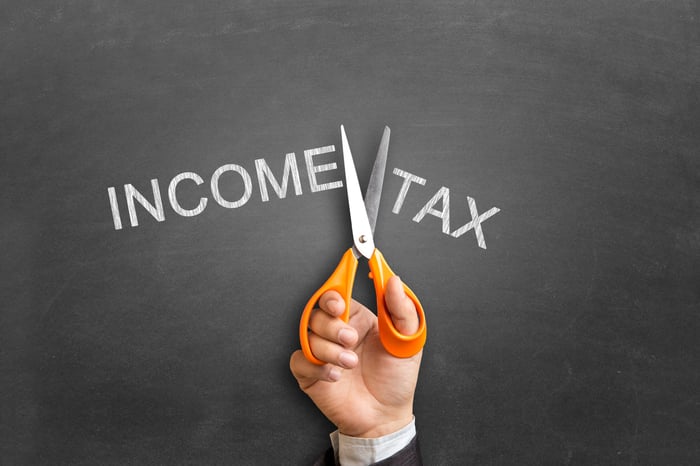 In 2020, Pfizer generated 52% of its revenue in the U.S. The company became the poster child for so-called corporate tax inversions in 2016, after it announced and then nixed its plan to merge with Botox-maker Allergan. The deal was designed to create an Irish company, avoiding the 35% corporate tax rate in America in favor of Ireland's 12.5%. The agreement was called off after the U.S. Treasury Department changed the rules about how taxes would be calculated for such companies.

Of course, almost no company pays the full tax rate, and corporations are notorious for shifting profits around to claim income in tax havens. Pfizer's attempt happened before the 2017 Tax Cuts and Jobs Act (TCJA) reduced the corporate rate to 21%. In the four years prior to the law, Pfizer paid an effective tax rate of about 24%. In the three years since, the company has cut a tax check for less than 4% of profits. (During 2016 and 2017, the repatriation of overseas cash and various financial engineering maneuvers to take advantage of the new law were also considerations.)

Back in 2017, management said it would invest $5 billion over five years in the U.S. So far, overall capital spending has indeed been up about $1 billion per year. Even if the tax rate goes halfway back to where it was before TCJA, it could put a dent in earnings. Applying that 14% rate to 2020 profits would have lowered earnings per share (EPS) by about $0.10. At Pfizer's current price-to-earnings ratio (P/E), the stock would be trading about 8% lower. No one knows how markets will react to new information; that's just the math. However, those who own shares in the company might want to pay attention to what happens in Congress over the next few months.

In 2020, Johnson & Johnson also generated 52% of its revenue in the U.S. Like Pfizer, the company benefited from the 2017 TCJA, seeing its effective tax rate decline from about 19% in the four years prior to about 13% since.Management also said they planned to invest more at home -- in Johnson & Johnson's case, in research and development. As promised, spending in that area has increased about $1.5 billion per year.

For Johnson & Johnson, the potential increase in tax rate isn't as pronounced. A new hypothetical rate of 16% would drop 2020 EPS to $5.32. Applying the current P/E of 30 would trim roughly 4% from shares. That's probably not much concern for the world's largest and most diversified healthcare company.

Merck derived only 44% of its revenue from the U.S. in 2020. That leads to a lot of cash building up overseas. Such was the case in 2004 when the American Jobs Creation Act allowed the company to repatriate $16 billion at a 5.25% tax rate. Merck was heavily criticized in the subsequent two years after it laid off 7,000 workers. When the TCJA was enacted in 2017, management said it would invest $8 billion in the U.S. over the next five years. So far, it's on track. The company is averaging about $2 billion more per year in overall capital spending.

The company's tax bill only dropped from 26% to 20% after the new law in 2017. Adding back half of the tax cut would reduce EPS to $2.68 and the stock about 4%. As with Johnson & Johnson, it's hardly enough to hit the radar for shareholders.

As with any legislation, we'll have to wait and see the details before jumping to conclusions. The new administration wants the corporate tax rate closer to where it has been in the past and there is likely enough support in Congress to get something done. For shareholders of large pharmaceutical companies, the important question is by how much those tax rates will go up.

Despite the looming change, investors shouldn't rush out and sell shares. Powerful industry lobbyists tend to turn big talk into small action when it comes to cracking down on corporations. It is important to be aware of the potential impact and have a plan, but after doing the calculations, it doesn't seem likely the legislation would spur much of a sell-off even in the stocks that would get hit the most.