Please ensure Javascript is enabled for purposes of website accessibility
Log In Help Join The Motley Fool
Free Article Join Over 1 Million Premium Members And Get More In-Depth Stock Guidance and Research
By Timothy Green - Apr 6, 2021 at 7:20AM

A combination of solid products from Advanced Micro Devices (AMD 1.68%) and years of delays and missteps on the manufacturing side has put chip giant Intel (INTC 0.84%) in a tough spot. The company is still manufacturing many chips on its 14-nanometer (nm) process because of problems with its 10nm process, a situation that has erased any manufacturing lead Intel once had over third-party foundries.

AMD uses a 7nm process from Taiwan Semiconductor Manufacturing for its latest Ryzen PC chips. The Ryzen 5000 series, which launched late last year, overtook Intel's chips in terms of single-threaded performance thanks in part to that cutting-edge manufacturing technology. Single-threaded performance is particularly important for gaming, as well as for other use cases that can't take full advantage of many cores.

Comparing manufacturing processes across companies isn't exactly apples-to-apples, but it's clear that Intel has fallen behind. However, the company is still managing to wring out performance gains from its 14nm process. Intel's latest Rocket Lake PC chips, built on a heavily tweaked and optimized 14nm process, manage to hold their own against AMD.

The chips are based on the Cypress Cove architecture, Intel's first new desktop PC architecture in years. That architecture change and whatever manufacturing improvements Intel made are enough to provide a viable alternative to AMD, particularly for PC gamers. While AMD certainly has the upper hand until Intel starts shipping 7nm chips, the company shouldn't be counted out. 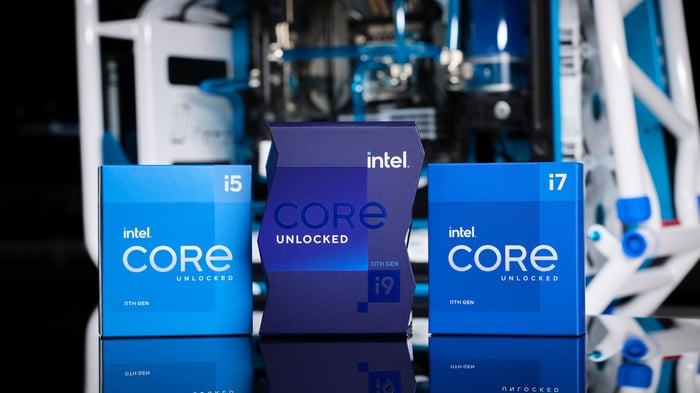 Intel is not trying to compete on core counts with Rocket Lake at the high end, partly because the new chips require a lot of power to be competitive. Instead, the company is ceding AMD's advantage in heavily multithreaded applications and focusing on single-threaded performance.

The $539 i9-11900K from Intel features eight cores and 16 threads, so it loses by a wide margin to AMD's comparably priced chips in multithreaded applications. But reviewers at Tom's Hardware found Intel's chip to offer similar performance in gaming and other lightly threaded applications to AMD's Ryzen 5900X.

The cheaper i5-11600K from Intel, which is a six-core, 12-thread part priced at $262, undercuts the Ryzen 5600X on price. There's a graphics-less version of Intel's chip with an MSRP of just $237 as well. While the Ryzen chips beats the Intel chip in gaming benchmarks, the significantly lower price makes the i5-11600K a compelling choice for cost-conscious gamers.

One factor that complicates these comparisons is the actual retail pricing available. AMD has struggled to keep its chips its stock, and retail pricing for Ryzen chips is often much higher than MSRP. The Ryzen 5600X sells for around $400 on Amazon.com right now, for example.

Manufacturing its own chips may give Intel an advantage, since it has more control over supply. Even though Intel's chips are far from clear-cut winners at MSRP, if gamers have a choice between an Intel chip close to MSRP and an AMD chip at a severely inflated price, the Intel chip starts to look like a much better option.

It's likely tp take years for Intel to close the manufacturing gap between itself and leading third-party foundries. But even with an aging 14nm process, Intel has been able to keep putting out largely competitive products. AMD has staged an impressive comeback and has a clear advantage, but Intel is far from a lost cause.