It's official: The electric Silverado is coming, but the timing could be complicated.

General Motors (GM 2.25%) confirmed on Tuesday what most electric-vehicle investors had suspected: A battery-electric version of the huge-selling Chevrolet Silverado pickup is on the way.

At an event at GM's Factory ZERO, a Detroit-area plant that is being renovated to build electric vehicles, president Mark Reuss confirmed that the new electric Silverado will be offered in a variety of versions optimized for retail and fleet customers, and that GM expects it to have more than 400 miles of range. 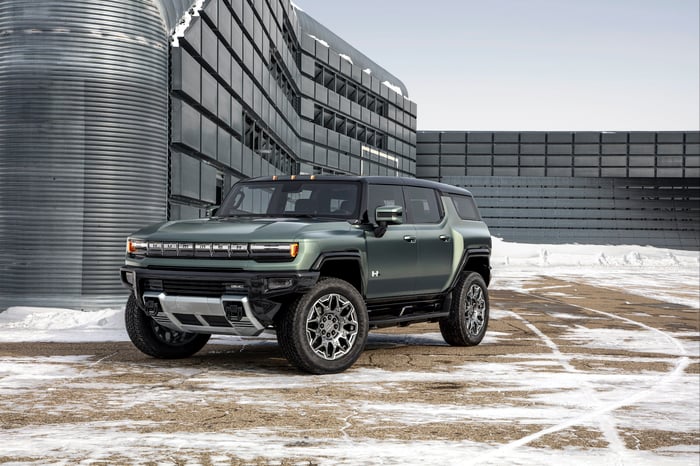 We know that production of the GMC Hummer electric SUV (above) will begin in late 2023. Will the Silverado, which will be built at the same factory, arrive before or after? Image source: General Motors.

But Reuss didn't say when the new Silverado will arrive, and the company didn't share photos or even renderings of the new electric pickup, suggesting that its debut may be a long way off. The Hummer pickup is due to begin production late this year; its SUV sibling will follow in 2023 as a 2024 model.

Whenever the new battery-powered Silverado arrives, it will face stiff competition: Archrival Ford Motor Company (F 1.76%) has said that it will begin production of a battery-electric version of its F-150 pickup in mid-2022; upstart Tesla (TSLA 2.23%) plans to begin production of its radical Cybertruck pickup by the end of 2021.