Please ensure Javascript is enabled for purposes of website accessibility
Log In Help Join The Motley Fool
Free Article Join Over 1 Million Premium Members And Get More In-Depth Stock Guidance and Research
By Keith Noonan - Apr 7, 2021 at 8:44AM

Shares of Lizhi (LIZI 6.14%) jumped 13.5% in March, according to data from S&P Global Market Intelligence. The stock gained ground after the audio platform company published its fourth-quarter results, announced new partnerships, and received favorable coverage from an analyst. 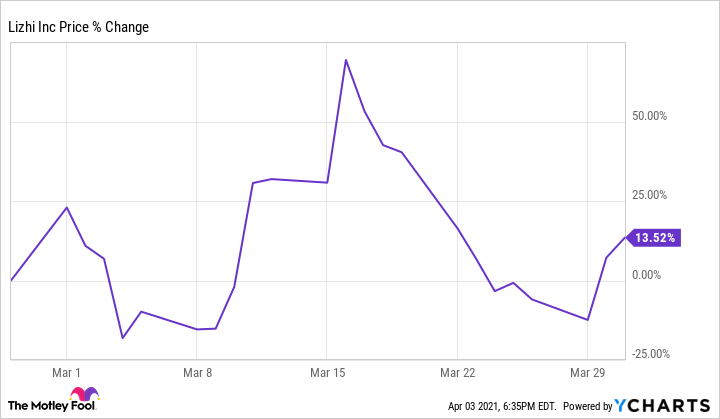 Lizhi released its Q4 results on March 9, posting sales and earnings that topped the market's expectations. The company recorded adjusted earnings of $0.02 on revenue of $64.4 million, while the average analyst estimate had called for a loss per share of $0.05 on sales of $60.8 million. Average monthly active users on the platform hit 58.4 million, up from 51.9 million in the prior-year quarter. Partnerships with auto companies should help Lizhi expand the reach of its audio platform, and progress on expanding into new product and service categories has helped push the company's share price up roughly 130% in 2021. Citron Research published a note on Lizhi on March 16, setting a $30 one-year price target on the stock and citing the company's efforts to move into the dating app market as a potential positive catalyst. At the time of the note's publication, this represented roughly 188% upside, and its release corresponded with substantial gains for the company's share price.

Lizhi stock has lost a bit of ground early in April's trading. The company's share price has dipped roughly 2.5% in the month so far. 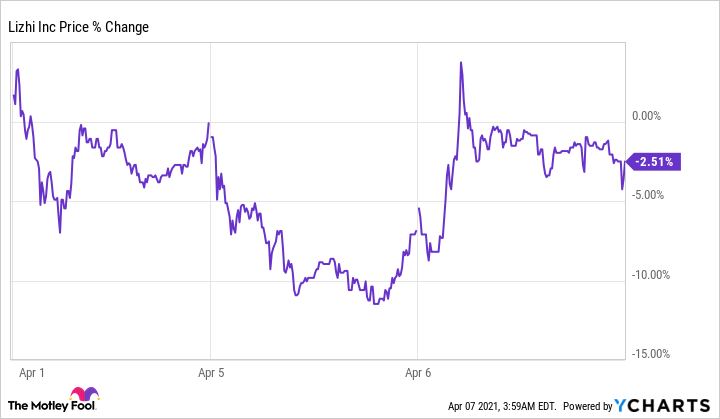 Lizhi may be in position to benefit as the Chinese government imposes tighter regulations on big tech companies in the country, but charting the company's long-term outlook involves high levels of speculation.

Lizhi has a market capitalization of roughly $413 million and is valued at approximately 1.5 times this year's expected sales.

Why Lizhi Stock Dropped 10% on Tuesday