Please ensure Javascript is enabled for purposes of website accessibility
Log In Help Join The Motley Fool
Free Article Join Over 1 Million Premium Members And Get More In-Depth Stock Guidance and Research
By Jason Hawthorne - Apr 10, 2021 at 5:30AM

Leaders from across the globe and at home want the new president to break from his past.

A proposal currently before the World Trade Organization would waive patent rights on COVID-19 vaccines and treatments in an effort to help low-income nations. Several top Democrats appear to support the move, although the Biden administration has yet to state a position publicly. Despite the push, the president may be hesitant to override patents for pharmaceuticals. As Barack Obama's vice president, he was personally involved in nixing India's compulsory licensing program that allowed the production of generic cancer drugs despite protests from western drug makers.

For shareholders in Novavax (NVAX 12.49%), Johnson & Johnson (JNJ -0.77%), and Moderna (MRNA 3.73%), the move could mean a lower ceiling of sales and profits, despite the vast sums invested in developing the drugs. For the leading pre-pandemic vaccine makers, it could be a second chance after missing the initial COVID-19 vaccine opportunity. 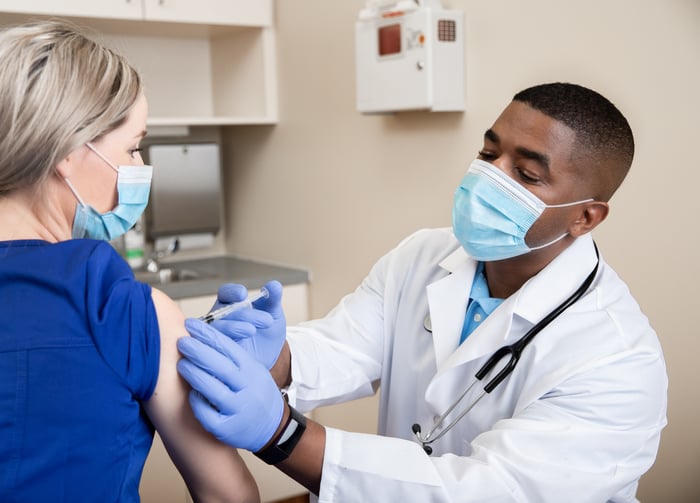 In October, India and South Africa proposed a suspension of intellectual property rights on COVID-19 vaccines and treatments. The movement has gained steam, with nearly 100 additional countries backing the idea. The push follows the mantra that "we aren't safe until the world is safe." If that is true, then we clearly aren't safe. While the U.S. has administered at least one dose to about a third of its population, many countries have yet to even begin. In fact, only 0.1% of the global vaccines administered thus far have been in low-income countries.

As you would expect, many rich nations and pharmaceutical companies oppose the idea. They argue that removing patent protection wouldn't actually increase the supply of vaccines, because the ingredients would still be limited. In that case, production would be fragmented across many producers and would likely lead to even fewer available doses. A compromise that has been tossed around is forcing companies to license their vaccine patents for use in other countries. However, it's unlikely to occur, as President Joe Biden was opposed to this practice as vice president.

No market for old leaders

Moderna could be an especially ripe target as its vaccine relies heavily on a government patent. Some argue that because of this intellectual property ownership, the U.S. could improve access by simply adding more manufacturing partners, requiring the technology be shared with the World Health Organization, or even mandating universal global pricing. Novavax, a company that has never had a drug approved by the U.S. Food and Drug Administration, is targeting May for the authorization of its vaccine candidate. Johnson & Johnson's jab is currently going into arms, but the healthcare giant's deal with Merck (MRK 0.24%) to produce the drug could leave it vulnerable. If the patents are set aside, it would be one of a few large vaccine makers likely to create their own drug after stumbling in its first attempt to address COVID-19.

Merck, GlaxoSmithKline (GSK -1.03%), and Sanofi (SNY -1.63%) are three of the largest producers of vaccines worldwide. It was considered odd when the University of Oxford partnered with AstraZeneca on its drug instead of U.K.-based vaccine titan GlaxoSmithKline. Instead, Glaxo teamed up with Sanofi, but the vaccine power couple is still months behind others after early trial participants were accidentally given less-concentrated doses of their drug candidate. Merck abandoned its attempt after poor results, but found another way onto the COVID-19 stage through Johnson & Johnson. Like Pfizer (PFE -1.28%), both Sanofi and GlaxoSmithKline had been working with companies developing drugs using messenger RNA (mRNA). Unlike Pfizer, they chose what seemed like the safer path.

The balancing act for investors

This likely won't be our last pandemic. If property rights aren't protected, it could take away the incentives companies have during the next outbreak. After all, even in 2020 some of the largest vaccine makers decided to take the conservative route in fighting COVID-19. They chose not to pursue the nascent mRNA technology and instead focused on more traditional methods, despite the longer production timelines. The companies that ended up with the first vaccines did so largely because they had little to lose. The first mRNA drug was likely a few years from approval, and the pandemic offered an opportunity to accelerate that timeline. Now, those companies are reaping the benefits. Novavax didn't have an mRNA drug, but it did face delisting from the Nasdaq after two failed clinical trials and its stock falling more than 98% from previous highs after each flop. At that point, why not go all-in on a vaccine?

On the other hand, the SARS-CoV-2 virus will be a concern as long as it is circulating, and it will circulate as long as large parts of the world have limited access to vaccines. The fact that only 0.1% of vaccines have been administered in low-income countries shouldn't seem fair to even the most ardent supporters of intellectual property rights. That's why some compromise will have to be reached, and the hints of one are already on the horizon. First, the U.S. has pledged $4 billion to COVAX, the global vaccine initiative that supports 92 low and middle-income countries. Dr. Anthony Fauci also recently said the U.S. may not need the tens of millions of doses of the as yet unauthorized AstraZeneca vaccine it has in storage. The implication is the doses could be donated to the global cause. If so, that could satisfy those who think the U.S. isn't doing enough to help the world fight the pandemic. It would also protect the patents of drug companies, something Biden has shown a desire to do in the past.