Tim Cook suggests that he's unlikely to be Apple's CEO a decade from now.

In a few months, Tim Cook will celebrate his 10th anniversary serving as Apple's (AAPL 0.96%) CEO. Steve Jobs had stepped down back in August 2011 due to ongoing health struggles, naming Cook as his successor. Jobs would die just a few months later, losing a protracted battle with pancreatic cancer. In a recent interview with The New York Times, Cook (who turned 60 last year) acknowledged that he would probably not be Apple CEO for another 10 years, although there are no specific plans at this time for his retirement.

That all leads an inevitable question on investors' minds: Who will be Apple's next CEO? 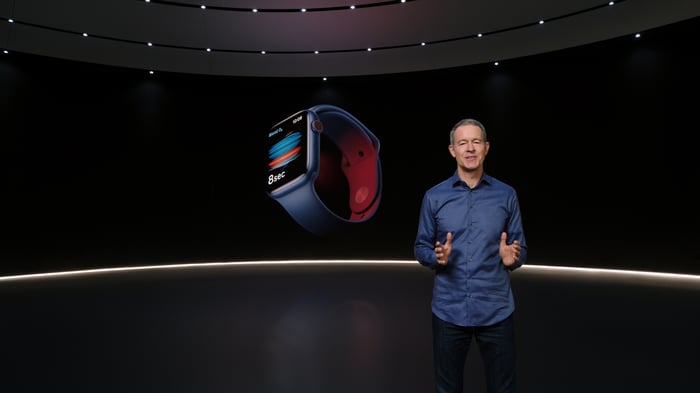 Will it be Jeff Williams?

Apple's senior leadership team consists primarily of company veterans who have each been with Apple for decades. While there isn't much modern precedent to go off, it seems certain that Apple would choose an internal candidate that lives and breathes the Mac maker's culture as opposed to tapping an external leader.

Once upon a time, Scott Forstall was thought to be in line for the CEO role, but Cook fired the former software chief back in 2012 over the disastrous rollout of Apple Maps -- reportedly due to Forstall's unwillingness to take responsibility for the debacle. There has also been periodic speculation about former design chief Jony Ive becoming CEO. However, Ive left the Cupertino tech giant to start his own design firm (with Apple being its biggest client) back in 2019, and he has never been interested in becoming chief executive.

More recently, there have been indications that Apple is considering COO Jeff Williams to be the company's next CEO. A longtime lieutenant to Cook, Williams knows how to manage Apple's sprawling global operations, which is critical when considering the company's sheer scale. It's worth noting that Cook had also served as Apple COO prior to becoming CEO in 2011. Williams is widely considered to be Cook's heir apparent, according to Bloomberg's Mark Gurman.

Nowadays, the ability to negotiate with suppliers, coordinate distribution, juggle supply chain logistics, and rally tens of thousands of employees is arguably more important to Apple's ability to execute than dreaming up the next visionary product.

That's not to say that Williams is lacking in the product department, as he currently spearheads Apple Watch development and oversees the company's digital health strategy. The COO also recently took on additional responsibilities in managing Apple's world-class design team when Ive departed and is reportedly more involved with product development than Cook currently is.

As a fitness enthusiast, Cook is in excellent health and plans to remain CEO for a few more years, according to the interview. Apple should have ample time to finalize its succession planning.