Please ensure Javascript is enabled for purposes of website accessibility
Log In Help Join The Motley Fool
Free Article Join Over 1 Million Premium Members And Get More In-Depth Stock Guidance and Research
By Adria Cimino - Apr 13, 2021 at 6:30AM

A new revenue source is on the horizon.

Moderna (MRNA 4.97%) is already on its way to billion-dollar revenue this year. The company in February said advance purchase agreements for its coronavirus vaccine translate into $18.4 billion in sales. And that number may have even increased since. There's no doubt Moderna's vaccine will generate blockbuster-level revenue this year.

Some investors are worried about revenue next year though. That's because vaccine makers haven't yet determined how often people will have to be vaccinated. So, will these billion-dollar years be a regular thing? Or is this year an exception? Moderna's chief medical officer Tal Zaks offered a major clue during his presentation last week at The Economic Club of New York. Here are the six words that may mean billions for Moderna next year -- and every year. 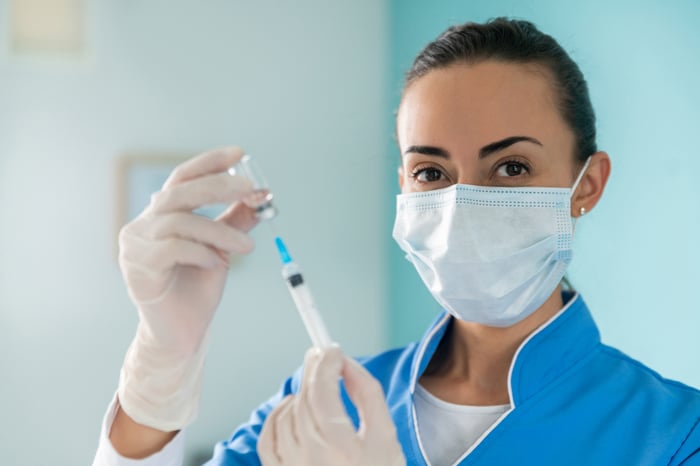 Zaks told the club Moderna is on track to have a booster shot ready "by the end of this year." The booster is meant to better protect against new strains of concern. And Moderna could possibly update such a product as new variants arise.

The biotech company moved aggressively into this area -- even though its two-dose vaccine held up against the U.K. and South African strains in in vitro tests. Last month, Moderna launched a study to include 60 volunteers who already have received the vaccine. Researchers are giving some participants a strain-specific booster candidate targeting the South African strain. And they're giving others a combination of a third vaccine dose plus the booster candidate.

So, according to Zaks, one of these candidates likely will be ready for use a year after the Moderna vaccine launch. The U.S. Food and Drug Administration (FDA) granted the vaccine Emergency Use Authorization in December of last year.

If the FDA also authorizes a booster, anyone fully vaccinated with the Moderna vaccine could come back for this new jab at a certain point.

Here's what this means for revenue in 2022. First, let's consider Moderna's orders this year for regular vaccine doses. The company has agreed to supply about 800 million doses to more than a dozen countries. It's reasonable to expect those countries would follow up by ordering boosters to be given to individuals who already received the original two-dose regimen. That means Moderna may be on its way to supplying at least 400 million booster doses.

Now, let's have a look at revenue potential. We don't know exactly how much Moderna is charging each country for vaccine doses. It may vary according to order size and other factors. But let's look uniquely at the U.S. And here, we can use the price paid in the original supply agreement as a guide. That's $15 per dose. The U.S. so far has ordered 300 million doses of Moderna's vaccine. If the government aims to provide a booster for each vaccine recipient, it would then order 150 million booster doses. And that could represent about $2.3 billion.

We could imagine these booster orders coming in quickly in early 2022 as countries aim to fully protect their citizens. So, whether full vaccinations are needed yearly or not, Moderna still could bring in billions in revenue next year and beyond.

Moderna's CEO Stephane Bancel said earlier this year that the two-dose vaccine may provide protection for a couple of years. It's possible that will be the case -- and that boosters will be given between full vaccinations to handle variants of concern. But Moderna still is collecting trial data. It's possible the company will determine that full vaccinations should happen once a year -- and boosters at some point in between.

I wouldn't worry if Moderna generates more revenue in certain years due to big vaccine orders and less the following year if governments don't need to order for full vaccinations of their populations. Over time, between full vaccinations and potential boosters, revenue should remain generally strong. That's good news for Moderna's long-term revenue -- and for long-term investors in this innovative biotech company.