Please ensure Javascript is enabled for purposes of website accessibility
Log In Help Join The Motley Fool
Free Article Join Over 1 Million Premium Members And Get More In-Depth Stock Guidance and Research
By Nicholas Rossolillo - Updated Apr 14, 2021 at 11:27AM

This AI-enhanced personal lender is jump-starting its entry into the auto lending market.

A seeming multitude of fintech and digital payments companies have made public debuts in the past year. Some are merely trying to take advantage of the hype surrounding the digital economy, but others look like promising long-term growth stocks. Upstart (UPST 3.79%) is one of those promising few -- but it's no hidden gem. As of this writing, shares are up an incredible 280% since its December IPO.

The latest quarterly report and a pending acquisition have helped send the fintech company's stock into the stratosphere. Nevertheless, for investors with a very long-term horizon (think five years or more), this is a growth stock worth putting on your radar.

Upstart is trying to rewrite the playbook on consumer credit. For those with a spiffy clean credit score, applying and getting approved for a personal loan is a cinch. Not so much for those with a less-than-stellar credit record using the traditional FICO-based score. However, Upstart points out that 80% of Americans have never defaulted on credit, but nearly half don't have access to prime credit (traditionally defined as one level below super prime, the highest consumer credit rating). Rather than relying on historical data to create a simple scorecard, Upstart uses artificial intelligence (AI) to improve the credit decision-making process and increase access to lending for the masses. 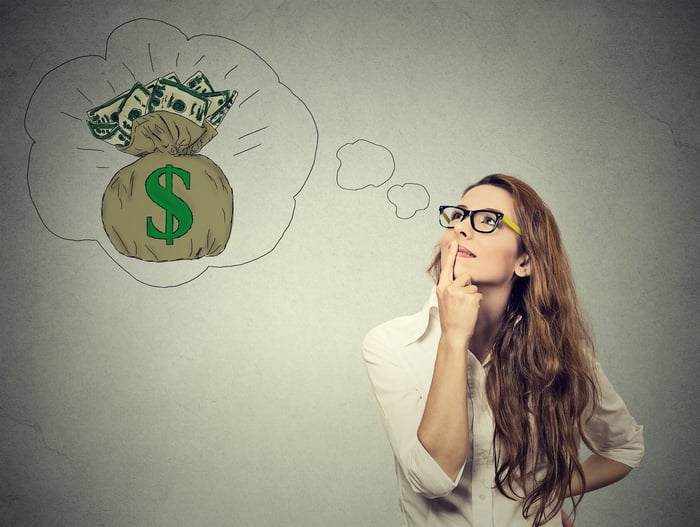 Upstart itself is a lender, but it also partners with banks and allows them to use its AI software to help improve offers to clients -- thereby increasing approvals, driving down loan default rates, and reducing interest rates for the borrower. And because the application and approval processes are automated, the company's AI-based platform remained in high demand even during the pandemic.

It's easy to see why there's such optimism around this stock. Besides double-digit percentage growth amid a pandemic-induced recession, Upstart is already profitable.

It's also using the sizable war chest it raised from its IPO ($251 million in unrestricted cash at the end of 2020) to go shopping. It's acquiring the small company Prodigy Software to accelerate its entrance into the largely untapped auto loan industry. Some $1 trillion a year is spent on car purchases in the U.S. -- most of those buys financed. Upstart offered its first auto loan late last year and will use Prodigy to ramp up the national rollout of its auto loan program for car dealers and banks.

Sky-high potential for a reasonable price

Given the wild swing higher in Upstart's share price since its public debut late last year, this stock is still trading for a reasonable valuation -- if you are investing with a long-term time horizon. Shares currently trade for 15.5 times expected 2021 revenue (Upstart forecasted sales to be about $500 million, more than double last year's haul) and 155 times expected 2021 adjusted EBITDA (forecast to be about 10% of sales, or about $50 million). Subsequent to the last quarterly update, the company also announced it was raising as much as $276 million more cash by selling additional stock. This is one well-funded financial technologist poised to bring some much needed digital updates to the lending industry.

Granted, I'm not calling Upstart stock a bargain. The company has peers that are also hard at work trying to change the status quo in banking -- like SoFi, which is in the process of going public through the special-purpose acquisition company Social Capital Hedosophia V (IPOE). But this young and already profitable company is making great strides in the massive personal lending and auto loan space, and it will only get more profitable over time as it reaches a more efficient scale. If you're looking for a promising fintech stock for the long term, Upstart is certainly worth your consideration.

Where Will Upstart Be In 10 Years?

Is Upstart in Trouble After the Fed's Monster Rate Hike?