Please ensure Javascript is enabled for purposes of website accessibility
Log In Help Join The Motley Fool
Free Article Join Over 1 Million Premium Members And Get More In-Depth Stock Guidance and Research
By Rekha Khandelwal - Apr 16, 2021 at 8:11AM

The stock's valuation has improved, but has it improved enough?

Fuel cell maker Plug Power's (PLUG -5.87%) stock has fallen nearly 60% from its high price of more than $73 this year. The company is working aggressively to grow its sales and has recently entered into several key partnerships that should help it achieve this goal. With enhanced growth prospects and a lower price, the stock's valuation has improved. Let's see if it has changed enough to make the stock a buy right now.

In January, Plug Power stock was trading at a price-to-sales ratio of around 104. The ratio has now fallen to 51. Based on 2021 estimated sales, the ratio stands at around 37. Surely it has improved a lot from its January levels. 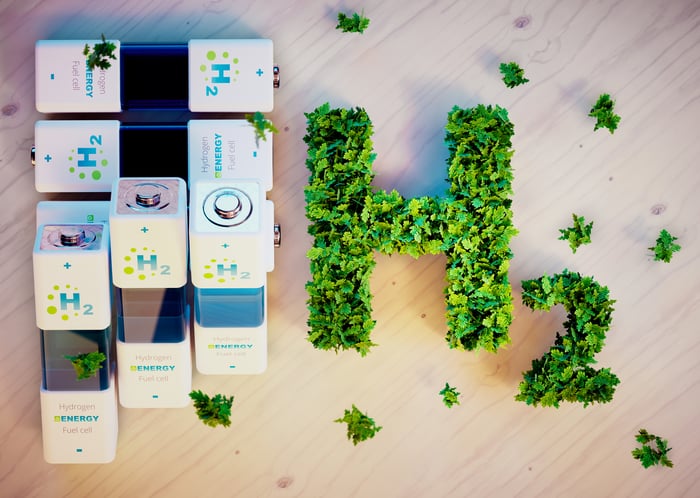 Going by Plug Power's estimates of $1.7 billion sales in 2024, the price-to-sales ratio falls to a saner level of around 10. For a fast-growing company, that kind of ratio isn't too unusual. So if the company can grow its sales as it is guiding, its valuation can make some sense. It is noteworthy that the price-to-sales-ratio calculation for 2024 sales doesn't take into account potential dilution. In the last year, Plug Power's outstanding shares have increased 82%.

Plug Power has been taking aggressive steps to grow its top line. In February the company announced its plan to build a green hydrogen production facility in New York with a production capacity of 45 metric tons per day. Plug Power also recently signed a previously announced deal whereby South Korea's SK Group will invest $1.6 billion in Plug Power in exchange for a 9.6% stake in the company. The two companies plan to jointly establish a huge fuel cell and electrolyzer production facility in South Korea. The South Korean government has set ambitious goals for promoting hydrogen use in the country, which should benefit Plug Power.

The company has also entered into partnership with automaker Renault. A planned joint venture with Renault will target a 30% share of the fuel-cell-powered light commercial vehicle market in Europe. That would be huge as 30% of the light vehicle market is expected to be around 500,000 vehicles by 2030. Plug Power has also announced a partnership with ACCONIA, a leading developer of sustainable infrastructure solutions. With an expected investment of over 2 billion euros, the joint venture will aim to capture 20% share of Spain and Portugal's green hydrogen market by 2030.

So Plug Power's 2024 sales guidance of $1.7 billion and sales growth beyond that look achievable. However, sales are just one part of the story. Let's turn our attention to other key metrics as well as risks.

With its sales target looking more realistic, the next key concern is attaining profitability. After all, the company has been growing its revenue for years. The company hopes to achieve gross margins of more than 20% by 2022 and improve beyond that. But achieving bottom-line profits looks much more difficult.

Plug Power currently derives roughly 94% of its revenue from the material handling business, which primarily supplies fuel cells for forklifts. Despite boasting a list of prominent customers, the company hasn't been profitable in this segment so far. By 2024, the company hopes to generate $750 million from the material handling segment, with the remaining nearly $1 billion coming from stationary base load power generation and fuel cell powered vehicles.

Considering that Plug Power hasn't been profitable in a segment it has been operating in for years, it might be a big challenge for it to turn the bottom line green in a new segment. Moreover, if fuel-cell-powered vehicles' growth remains subdued, it can potentially limit Plug Power's growth as well as its margins.

Plug Power hopes to benefit significantly from governmental incentives such as LCFS (low carbon fuel standard) credits in California and similar potential credits for green hydrogen under President Biden's climate plan. Further, Plug Power is looking to get a $520 million loan from the U.S. Department of Energy under its loan guarantee program. However, as the adoption of fuel cell technology remains slow, these incentives too would likely be slower and lower than the company would like them to be.

It's important here to understand why Plug Power isn't profitable after 20 years of operation. It's not that the company is making huge capital investments that will generate income for it at some point. If that were the case, the stock's prospects would be better. It's simply that Plug Power's fuel cells cost more than customers are willing to pay. Other energy and storage options are cheaper and thus preferable. So Plug Power is growing its top line by selling products at a price that customers are willing to pay. But that is not enough to cover the company's costs.

In short, even if the company is able to make some profit at scale, the margins will likely be thin. And this is the single biggest factor that suggests the stock shouldn't command the high valuation it currently has. That competition may hurt the company's margins is a concern only if the business makes economic sense, which it doesn't do right now. I'll wait for the company to become sustainably profitable before jumping in.