This fintech is down so far this year, but it has great growth potential

Stocks in the financial sector have outperformed the S&P 500 -- and most other sectors -- in 2021, led by the resurgence of traditional banks. However, some of the fintechs that saw their stock prices skyrocket in 2020 have come back down to earth this year, including Green Dot (GDOT -0.17%), a fintech that provides prepaid debit cards as well as banking services.

The company's stock price soared 139% last year, but this year it's down about 17% at Friday's prices, while the average financial sector stock is up 19%. Should investors be concerned? Let's take a look.

Green Dot is primarily known as one of the largest issuers of prepaid debit cards, as well as reloadable cards, which often serve as an alternative to banks that allow users to make purchases, make deposits, pay bills, etc. But the company also provides traditional banking services through its online, FDIC-insured bank. 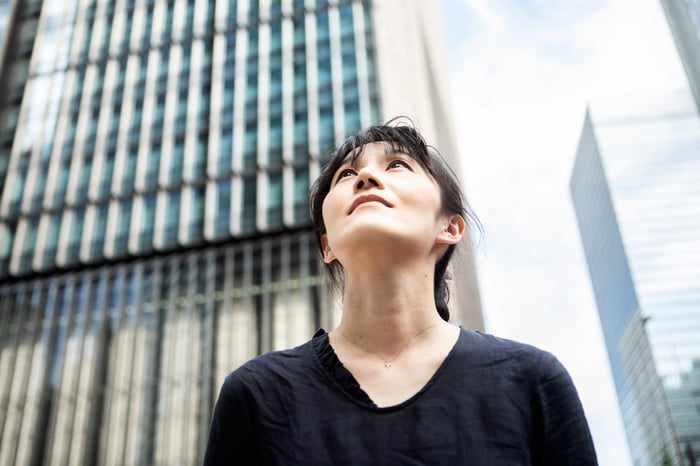 In addition, it provides banking-as-a-service (BaaS) for a growing number of companies, including Uber Technologies, Apple, Walmart, Amazon, QuickBooks, and Kabbage, among others. These companies work with Green Dot to provide their own banking solutions for customers. For example, Green Dot works with Uber to provide its drivers with branded debit cards that offer instant pay, rewards, and branded bank accounts. In the fourth quarter, Green Dot launched the Amazon Flex Debit Card with Amazon for its delivery partners, which offered cash back on fuel purchases, among other perks.

In January the company expanded its offerings by rolling out a new mobile banking app, GO2Bank. GO2bank is targeted at the millions of Americans who don't have bank accounts, or who regularly use other services, like check cashing and money orders, to manage their money. GO2Bank has low -- and sometimes no -- monthly fees, overdraft protection, access to credit, early access to paychecks, and cash-back rewards, among other features.

Last year, Green Dot saw revenue climb 13% to $1.25 billion, with most of it coming from fees associated with its cards. About 47% of that is from card revenue and fees, including fees charged to its BaaS partners and monthly maintenance fees charged to users. This was up about 29%, driven by a surge in BaaS fees. About 28% of the revenue comes from interchange fees, which are fees that merchants pay when a card is used for a purchase. This was up about 6%. Green Dot also made about 23% of its revenue last year from its settlement and processing business, where it makes money by facilitating the movement of cash for consumers and businesses. This was up 2% last year.

The negative return this year is likely due to the high valuation Green Dot racked up last year when its stock price soared. Its trailing price-to-earnings (P/E) ratio is a whopping 109, though its forward P/E over the next 12 months is a more reasonable 22 as the stock price has come back in line with earnings expectations. In the company's fourth-quarter earnings release, management called for an operating revenue increase of 3% and an adjusted EBITDA (earnings before interest, taxes, depreciation, and amortization) increase of 4% for 2021.

Green Dot made a large investment in technology upgrades last year, which boosted expenses, but will ultimately eliminate some third-party expenses and improve efficiency. Also, the new mobile banking app, GO2Bank, has been very well-received since its launch, exceeding initial expectations for adoption. It will boost the company's banking revenue by catering to an underserved market, but could also be leveraged to better serve Green Dot's BaaS customers, helping to drive that business as well.

If you missed Green Dot's run-up last year, now is not a bad time to consider buying this fintech. In a world that is moving away from cash and toward digital banking, with fintechs poised to disrupt traditional banking, Green Dot is in a prime position. With good economic tailwinds at its back, it looks like a stock that could provide long-term growth.