The stock market has seems to be hitting a new all-time high almost daily. That's causing some concern that it might be a bit overvalued after a big run-up in the past year. However, there always seem to be some hidden gems out there for investors willing to go digging. Reuben Gregg Brewer (3M): In a recent article, The Wall Street Journal highlighted the progress of a lawsuit over ear plugs 3M sold to the U.S. military. Users say they were defective, while the industrial giant says they weren't. The case would be an expensive one to lose, and it's only one of a couple of large suits 3M is facing today. That helps to explain why the 3% dividend yield is near the high end of its historical range. That suggests the stock is relatively cheap today.

The stock rally over the past year has narrowed the value proposition, but that shouldn't stop investors from jumping on this Dividend King with over six decades of annual hikes under its belt. To be fair, if you look at price-to-sales, price-to-earnings, price-to-cash flow, and price-to-book value the impression is that 3M is fairly priced to slightly cheap. But that's actually extremely attractive given the quality of the company and its long-term success. Note that over the past decade the annualized dividend increase was over 10%, more than three times the historical rate of inflation growth. For dividend investors that kind of growth is well worth picking up at a fair, to slightly cheap, price point. 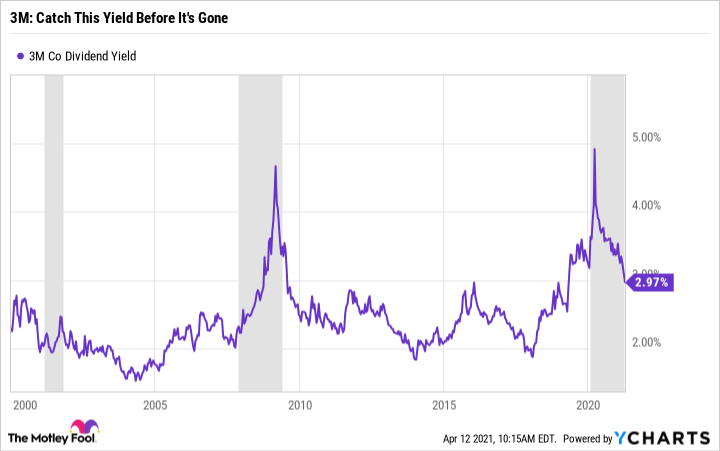 As for the lawsuits, 3M is an investment-grade rated company with an over $100 billion market cap. It should be able to handle the financial impacts here even if there is a negative outcome.

So cheap it's taking action

Matt DiLallo (Crestwood Equity Partners): The unit price of master limited partnership (MLP) Crestwood Equity Partners is down more than 10% since the start of 2020. That slump comes even though the energy midstream company grew its earnings by 10% last year despite all the turbulence in the oil market. That enabled the company to produce enough cash to cover its high yield distribution by two times and finance its expansion projects.

With oil and gas prices improving this year, Crestwood Equity anticipates more growth in 2021. The MLP expects to generate between $575 million and $625 million of adjusted EBITDA in 2021, putting it up more than 3% at the midpoint from 2020's level. It also anticipates producing $335 million to $385 million in free cash flow this year, roughly flat with 2020 at the midpoint. That's enough money to cover its current 9.2%-yielding distribution by two times and fully finance its capital spending with $130 million to $180 million left over.

That outlook suggests Crestwood trades at a cheap price. Given its current $4.2 billion enterprise value (EV), it trades at seven times its EV-to-EBITDA at the midpoint of its guidance. Meanwhile, with a $1.7 billion market capitalization, it trades at less than five times its free cash flow.

Crestwood is so cheap that the company recently agreed to repurchase 11.5 million of its common units from a former strategic investor for $268 million. That will reduce its outstanding unit count, making it even cheaper on a per-unit basis. Meanwhile, the company aims to use some of its excess cash to repurchase up to $175 million of additional units, in a sign it believes its units trade at a dirt cheap price. These repurchases make Crestwood appear like an opportunity that value investors won't want to pass up. An alluring bet in a high-growth industry

Not surprisingly, profit booking kicked in soon after as the market evidently wanted to see Brookfield Renewable Corporation stock's price normalize with that of Brookfield Renewable Partners. With the stock losing nearly 20% value in the past three months and now trading at around nine times cash flow, it's an opportunity for any investor looking to bet on the renewable energy growth story.

2020 was a record year for Brookfield Renewable as its funds from operations (FFO) grew 6%, encouraging management to increase distribution (dividend) by 5%. The company is a solid bet on renewable energy for several reasons. First, it is a pure-play renewables company with the backing of a solid parent. Second, it is one of the most diversified companies in the industry, and aims to expand aggressively into solar in the coming years while maintaining exposure to hydropower, wind energy, and energy storage. Third, management is targeting FFO per unit of 10% or more through 2025, which should support higher dividends and boost shareholder returns. The prospects are alluring, making Brookfield Renewable Corporation an attractive stock for long-term investors.