Please ensure Javascript is enabled for purposes of website accessibility
Log In Help Join The Motley Fool
Free Article Join Over 1 Million Premium Members And Get More In-Depth Stock Guidance and Research
By Trevor Jennewine - Updated Apr 19, 2021 at 9:50AM

This social media company will soon be competing for viewers and listeners.

According to the news website Vox, Facebook (META 0.94%) has big plans in the audio space, including a product to challenge Clubhouse, a voice-only social media platform that allows users to chat or listen in on conversations.

Facebook is expected to announce several new products today, including an audio-only version of Messenger Rooms, a videoconferencing platform designed to compete with the likes of Zoom Video Communications and Microsoft Teams; and a podcast discovery tool that will connect with Spotify Technology. 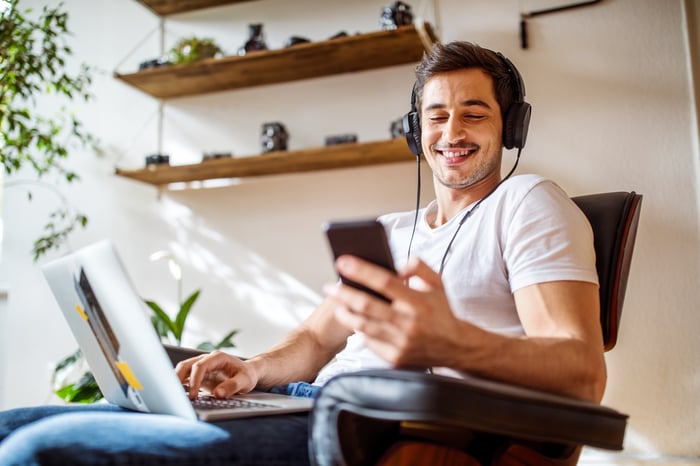 But the biggest news is what Vox called a "Clubhouse-like" product that Facebook has in the works, though the company hasn't provided a specific release date. If you're unfamiliar with Clubhouse, since its launch in March 2020, individuals like Elon Musk and Mark Zuckerberg have made surprise appearances in the app's chat rooms, helping drive its popularity.

Currently, the app is available on an invitation-only basis and just for Apple users, though support for Android could come as early as summer 2021. Even so, Clubhouse was valued at $4 billion in a recent funding round, up from a $1 billion valuation in January.

Not surprisingly, that rapid growth has caught Facebook's attention. Its monthly active users reached 2.8 billion last year, driving revenue growth of 22%. While that's not exactly slow, it does mark a continued deceleration from the 27% and 37% growth in 2019 and 2018, respectively. These new products could potentially help Facebook turn that tide, both by bringing more users to its platform and by providing a new way for users to engage.