Please ensure Javascript is enabled for purposes of website accessibility
Log In Help Join The Motley Fool
Free Article Join Over 1 Million Premium Members And Get More In-Depth Stock Guidance and Research
By Adam Levy - Apr 19, 2021 at 11:00AM

There are some big differences between Apple Music and Spotify that investors need to consider.

Apple (AAPL 0.63%) recently gave itself a pat on the back when it wrote a letter to recording artists noting it pays a penny per stream on its Apple Music service. That's about twice the rate of Spotify (SPOT -0.83%), the world's largest streaming service.

And while it's leading in its payout rate on a per stream basis, it only pays out 52% of revenue to record labels. By comparison, Spotify pays out about two-thirds of its revenue to labels.

There are a number of factors that enable Apple to pay more per stream to artists while keeping more of its revenue for itself. Here's what investors should consider. 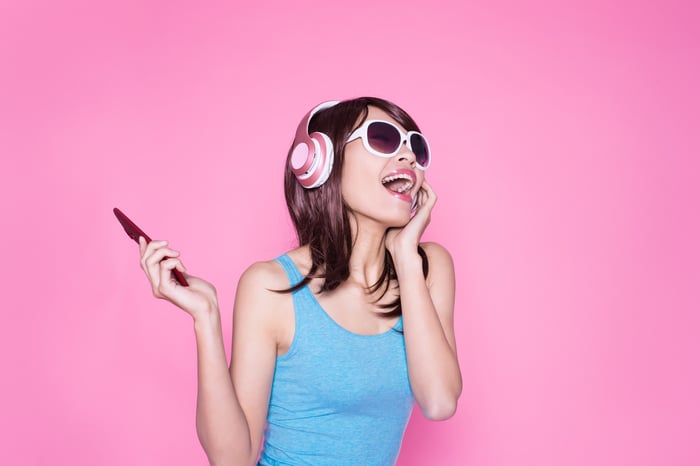 The big difference between Spotify and Apple Music

Spotify offers a free ad-supported tier for listeners, but Apple Music is subscription only. That difference in strategy has a big effect on the rates each service pays to artists and the percentage of revenue those royalties account for.

Spotify has long held up its free ad-supported tier as an important driver of paid subscriptions in the long run. In fact, Spotify contends that offering a free tier prevents listeners from seeking "non-revenue-generating alternatives," which you might just call "piracy."

But there's a drawback to offering a free tier -- less revenue per listener. As of the end of 2020, Spotify had 199 million free listeners and 155 million paid subscribers. But ad-supported revenue in the seasonally strong fourth quarter totaled just 281 million euros versus 1.89 billion euros for the paid subscribers.

Importantly, when Spotify pays a royalty for a listener on its ad-supported tier, it pays it out of the ad-supported revenue. And with 199 million listeners, even if they're less engaged on average than paid listeners, that's going to drag down its average payout per stream.

On the other hand, Spotify's contracts with record labels typically include guaranteed minimums, which means it may have to pay additional royalties if it doesn't generate enough engagement with the service. That could push the percentage of revenue it pays higher on average than its paid tier, where revenue is much more predictable.

Apple's biggest advantage over Spotify is that it owns the distribution platform. While it's possible to use Apple Music on devices not made by Apple, it's much more common among iPhone owners. And every iPhone comes with Apple Music pre-installed. It's the default music app. Even if you want to listen to music you've already downloaded, you'll use the Apple Music app by default on an iPhone.

That presents a big opportunity for Apple to onboard new subscribers. No need to tempt them with a free ad-supported service. No free tier means Apple's average revenue per user is higher than Spotify's.

What's more, Apple's paid users may not be as engaged as Spotify's paid users. If a Spotify user doesn't use the service as much, they may not mind the occasional ad while listening. As a result, Apple generates more revenue per stream, and it pays out more per stream.

For Apple investors, the important number to pay attention to isn't that it pays more per stream than Spotify. It's that it manages to pay out only half of revenue as royalties. A lower cost of sales, combined with Apple's position as a platform owner, allows it to bundle Apple Music without using it as a loss leader.

Indeed, Apple Music is at the core of Apple's Apple One bundle, which includes all the various subscription services the company introduced over the last half decade or so. That allows Apple to profitably bolster its other services while increasing customer engagement with its services and retaining them as iPhone and Mac users year after year.

For Spotify investors, Apple's relatively low royalty rate is also important. It indicates there's a lot of room for improvement in the company's premium gross margin, which came in at 28.9% in the fourth quarter. There's a big gap between that and the 48% Apple keeps after paying royalties, which accounts for the bulk of cost of sales. Spotify keeps its contracts with record labels short, so it frequently has an opportunity to renegotiate and improve its margins.

Meanwhile, Spotify's investing heavily in podcasts, both as a means to attract new users and to improve its margin for its ad-supported business. If Spotify can bring its ad-supported tier to break-even and raise the margin on its premium tier, it could become tremendously profitable given the scale the tech company's already achieved.