Please ensure Javascript is enabled for purposes of website accessibility
Log In Help Join The Motley Fool
Free Article Join Over 1 Million Premium Members And Get More In-Depth Stock Guidance and Research
By Rekha Khandelwal - Apr 22, 2021 at 9:11AM

The German automaker has unveiled ambitious plans in the electric vehicle space.

Last month, Volkswagen (VWAGY 0.11%) revealed its plan to be a major player in the electric vehicles market. Investors took note, sending the shares higher. The stock is up 63% in the last three months, while Tesla (TSLA 1.24%) stock fell 15% during this timeframe. But, as Volkswagen itself puts it, can this "old auto" company really beat "new auto" players to grab a slot at the top? Let's find out. 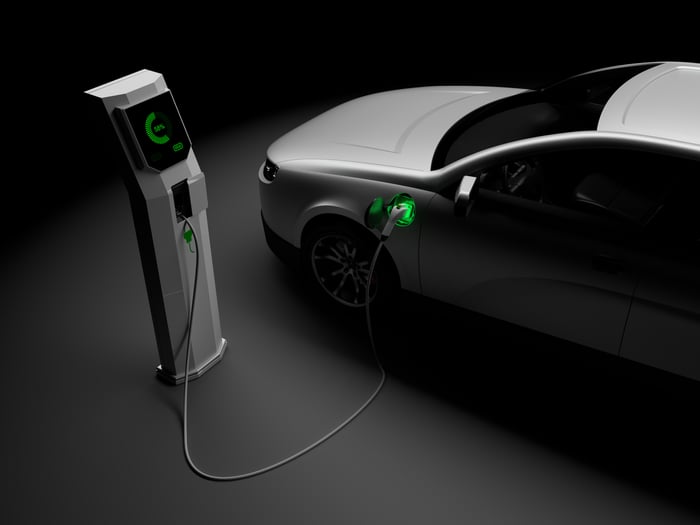 By comparison, top EV maker Tesla delivered 499,647 vehicles in 2020. The company expects to increase its deliveries by more than 50% in 2021. Tesla is ramping up production rapidly. The company says it currently has a production capacity of slightly above 1 million cars. Two of its gigafactories, one each in Berlin and Texas, are expected to begin deliveries this year.

So, Volkswagen seems ready to match Tesla's delivery numbers in a couple of years. That may put it next to Tesla at the top in terms of EV sales volumes. However, Volkswagen still needs to do a lot of catching up in terms of software and battery technology. The company is focusing on both areas.

Ford Motor, General Motors, and Toyota Motor are all making big efforts in the electric vehicles segment. However, from what we have so far, Volkswagen seems to be leading in EVs among the legacy auto companies.

Focus on batteries and software

To lead in the EV space, Volkswagen needs more batteries with better performance. To that end, the company plans to set up six new gigafactories in Europe with a total production capacity of 240 GWh (gigawatt hours) by 2030.

The company has also partnered with QuantumScape (QS 0.93%), which is focused on developing solid-state battery technology. If successful, this technology could meaningfully improve battery performance compared to the current lithium-ion batteries used in EVs. At the same time, Volkswagen is making constant efforts to reduce battery costs at its current facility and hopes to gradually reduce costs by as much as 50%.

While Volkswagen plans to partner with battery manufacturers, Tesla has set up its own battery production facility in the Bay Area to make up for the shortfall from battery suppliers.

In addition to batteries, Volkswagen is rapidly expanding EV charging infrastructure. The company intends to operate 18,000 public charging stations in Europe and 17,000 points in China by 2025.

One area where Volkswagen seems to be lagging is software, including autopilot and full self-driving features. Among other things, Tesla's control software optimizes a vehicle's performance and manages its charging. The company also provides regular "over-the-air" updates for its software. Volkswagen is focused on this key area and plans to invest 27 billion euros in digitalization over the next five years.

Volkswagen seems to have all it may take to become a top EV stock. It has a dedicated customer base, just like General Motors, who could perceive Tesla's models to be more risky. If Volkswagen delivers decent enough EV models, which it is currently doing, it can win most of this dedicated base.

At the other end of the spectrum are Tesla aficionados who like the company's sleek models, features, environmental friendliness (as it offers only EV models), and constant innovations. Indeed, attracting this base would be exceedingly difficult for any legacy automaker. Yet, all said, Volkswagen can surely transform to become one of the top stocks in the EV space.

EV Range Anxiety May Be a Thing of the Past

The Pros and Cons of Volkswagen’s Diesel Scandal Settlement

5 Top Stocks to Buy in April