Please ensure Javascript is enabled for purposes of website accessibility
Log In Help Join The Motley Fool
Free Article Join Over 1 Million Premium Members And Get More In-Depth Stock Guidance and Research
By Will Healy - Updated Apr 23, 2021 at 4:01PM

Fastly's (FSLY 3.79%) revenue and stock price have surged as its content delivery networks (CDNs) bring material to users in real time. However, the stock has climbed even as Fastly operates in a highly competitive environment, sometimes against the world's largest and most well-funded companies in tech. More recently, its stock has pulled back from record highs, so investors need to understand Fastly's business and financial condition before determining whether this cloud stock is a buy. 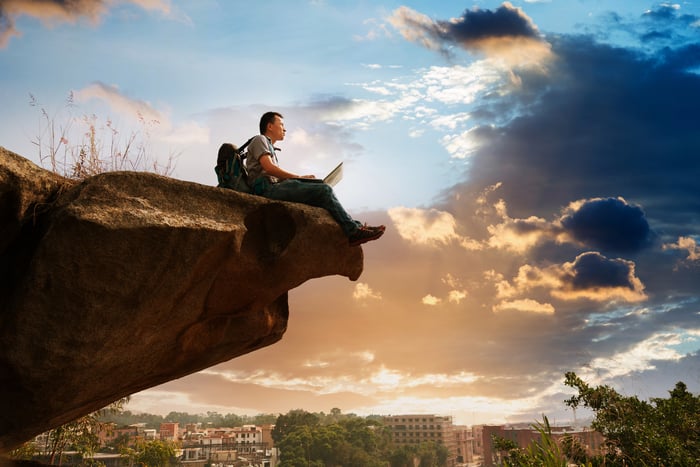 Fastly specializes in edge computing, which brings data from a central server in the cloud to a data center much closer to a user's location. This allows for speed, security, and scale when accessing websites or apps through its CDNs. The company has built strategically placed data centers worldwide to maximize performance.

Of course, large cloud providers such as Amazon's AWS and Alphabet's Google also offer edge computing services. Fastly must also compete with companies such as Cloudflare (NET 4.91%), which relies on set pricing instead of charging based on bandwidth usage, and Akamai (AKAM 0.86%), whose presence in the CDN market goes back to the 1990s.

Despite the intense competition, Fastly could still become the content delivery stock to own over the next decade. It has built a competitive advantage by building its CDNs from scratch so developers can build and create at the edge. This developer control allows for programmable systems that customers can easily set up and configure to meet their needs. Fastly's CDN also beats its peers on speed and real-time updates. This has attracted clients such as Wayfair and Yelp.

These systems became especially critical last year amid shutdowns caused by the COVID-19 pandemic. As reliance on technology suddenly increased, demand for Fastly's services rose significantly. Consequently, some of these gains could reverse as the contagion recedes and more offline activity resumes.

It remains unclear how a temporary slowdown will affect market share. According to Datanyze, Fastly claims only 5% of the companies using CDN, far behind Google, Cloudflare, and Amazon. Still, analysts should keep in mind that customers often use more than one CDN company to improve performance.

Fastly's value proposition helped its annual revenue to grow by 45% over the last year to $290.9 million. However, the company still reported an operating loss of $107.4 million during that period. While an $11.5 million income tax benefit from its acquisition of Signal Services offered some help, the net loss came in at $95.9 million, up 86% from the reported loss of $51.6 million in 2019. This occurred as operating expenses exceeded revenue growth, rising by more than 75%.

Still, coming out of the pandemic may only modestly slow Fastly down. The full-year 2021 forecast revenue is between $375 million and $385 million. This would mean a minimum annual revenue increase of 29%.

Moreover, the losses do not threaten Fastly's financial stability. Thanks to additional stock issuances, Fastly raised an additional $274.9 million in 2020. With this cash, Fastly paid off its debt and increased cash and marketable securities to a combined $194 million, up from $131 million at the end of 2019.

Fastly stock also looks strong despite its performance in early 2021. It has sold off in recent months, as a repeat of the 2020 gains does not appear likely. However, even though Fastly stock has lost almost 50% of its value since peaking last October, investors still earned gains of over 220% in the last 12 months. 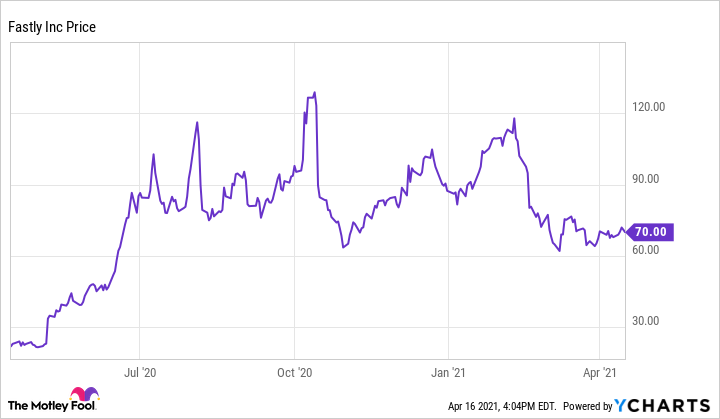 Additionally, the valuation offers a mixed picture. The price-to-sales (P/S) ratio now stands at about 25. This comes in well below the peak sales multiple of around 48 last October but does not compare to the single-digit P/S ratio of one year ago. It has become much cheaper than Cloudflare, which has increased to a 51 P/S ratio. Still, it remains more expensive to more established peers such as Akamai, which sells for about five times sales.

Should I buy Fastly?

Fastly will probably remain an expensive stock, as its brisk growth will likely not slow anytime soon. However, the more rapid speeds of Fastly's CDNs will likely draw the attention of more customers and will more than negate any effects of a post-pandemic slowdown. Additionally, Fastly's multiple has fallen by approximately half since peaking early this year. This provides what looks like a lucrative buying opportunity to invest in this fast-growth company.