Please ensure Javascript is enabled for purposes of website accessibility
Log In Help Join The Motley Fool
Free Article Join Over 1 Million Premium Members And Get More In-Depth Stock Guidance and Research
By Nicholas Rossolillo - Apr 23, 2021 at 9:46AM

The toy maker has a history of inking lucrative partnerships with fellow entertainers.

Fresh off of its public stock listing, video game and metaverse platform Roblox (RBLX 6.73%) is now embracing the real world. It inked a partnership with toymaker Hasbro (HAS -0.65%), which will make Roblox-game-inspired NERF blasters, a Monopoly board game, and a NERF experience within the Roblox game platform later in 2021.

It's but another indication that Roblox has real sticking power with its young user base and a new way to generate revenue outside of in-game purchases. But for Hasbro, this could be a new growth opportunity, and a chance to win over some new young fans of its own. 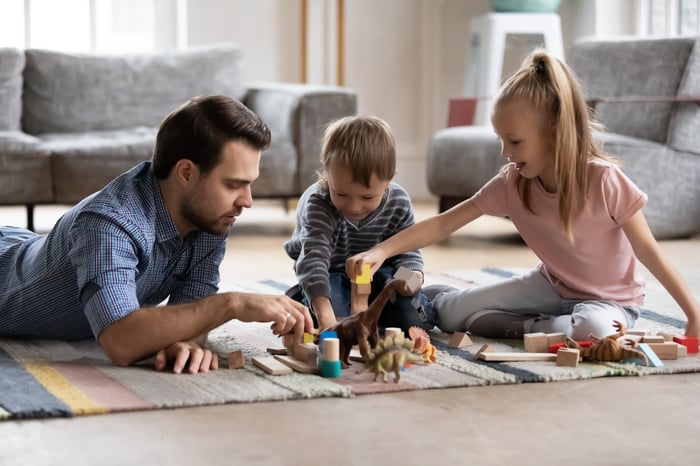 A history of lucrative toy-making licenses

This is by no means the first time Hasbro has signed a licensing agreement with another entertainment company. It has a division under the "partner brands" segment dedicated to toy making for brands that want to extend the reach of their intellectual property. In total, it hauled in $1.08 billion in sales in 2020 -- down 12% from the year prior, but that was mostly due to lapping exceptionally good 2019 results, which included new toy releases leading up to the Walt Disney (DIS 1.84%) box office hits Frozen 2 and Star Wars: The Rise of Skywalker.

Nevertheless, it's a significant area for Hasbro. The $1.08 billion in partner brand revenue represented 20% of Hasbro's grand total last year. Hasbro reported a 25% operating profit margin on "entertainment, licensing, and digital sales" in 2020 (where Roblox NERF toys, Roblox Monopoly, and eventually the Roblox NERF video game sales will be housed).

Overall, Hasbro's operating profit margin was only 10% last year, so licensing popular content to make toys is even more lucrative than the rest of its business -- even after doling out royalty payments to the franchise owners. This could thus be a win-win. Roblox gets a new licensing revenue stream based on its popular app content, and Hasbro gets access to an emerging kids entertainment platform.

A complement to "Baby Yoda"

As a Hasbro shareholder, I like this agreement with Roblox. Partner brand sales are a big slice of the overall pie, but its partnership with Disney makes up the majority of those sales. Sure, it sells other toys from other IPs, like Trolls: World Tour (a DreamWorks title owned by NBCUniversal and the Comcast media conglomerate). But Marvel, Star Wars, and Frozen account for the lion's share of revenue. If Disney ever decided to pull the plug, it would be a significant hit to Hasbro.

Roblox could help the toy company diversify its reliance on partners in a big way, not to mention help it deepen its development of virtual games and playtime. And with nearly 33 million daily active users -- most of them teenagers or younger -- Roblox is a noteworthy addition for Hasbro. Roblox may not match the hit "Baby Yoda" character toy sales anytime soon, but it's a good start.

A NERF game on the Roblox platform could be a fantastic marketing move too. Hasbro has clearly indicated it wants to bring more of its own toy brands into the digital age with more video games, TV shows, and movies. NERF seems like it could find a nice home on the Roblox app, which could translate into more real-life toy purchases. Maybe this will be the beginning of a deeper relationship between Hasbro and Roblox down the road.

For now, I find it promising that this leading toymaker is diversifying its important partner brands segment with a new high-profile name like Roblox. Look for updates to its progress later this year once the toys have been released.