Please ensure Javascript is enabled for purposes of website accessibility
Log In Help Join The Motley Fool
Free Article Join Over 1 Million Premium Members And Get More In-Depth Stock Guidance and Research
By Timothy Green - Apr 24, 2021 at 7:15AM

Its manufacturing process is an issue, too..

Intel has been a key beneficiary of the rapid growth of cloud computing. As cloud giants like Amazon, Microsoft, and Alphabet's Google have built out cloud capacity, Intel's server chips have been the standard option.

That situation is now starting to change. Rival Advanced Micro Devices (AMD 0.20%) is competitive with its EPYC server chips. Graphics chip leader NVIDIA (NVDA 1.11%) plans to launch an artificial-intelligence (AI) focused ARM-based server chip in 2023. And some big Intel customers are designing their own chips and cutting out the middleman entirely. 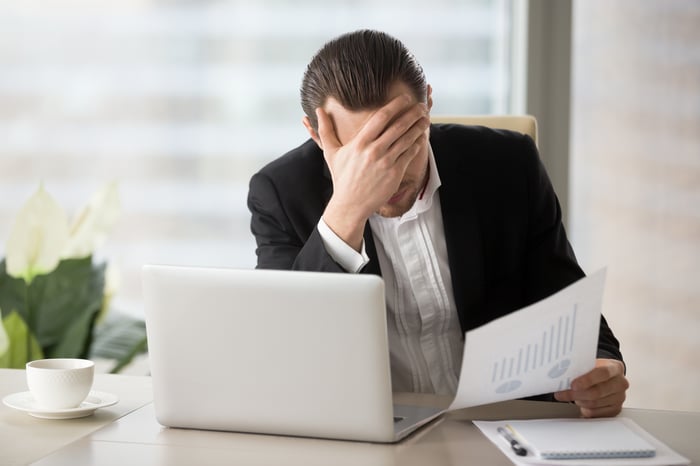 There's more going on than increased competition in the server chip market, and it's unclear how much of Intel's decline in data center sales was due to AMD stealing market share. Intel CEO Pat Gelsinger said during the earnings call that the results for the data center segment were actually slightly better than expected despite the huge drop in revenue.

Part of the problem was that cloud customers bought a lot of chips last year, and those customers are still working through those purchases. "A lot of that was driven exactly, as you asked in the question, by cloud digestion," Gelsinger said in response to an analyst asking about the decline in data center sales.

Intel CFO George Davis pointed to the fact that the first quarter of last year was particularly strong, so the comparison makes the company's results look worse than they really are: "... more than half of it was just the fact that we're comparing the bottom, what we now believe to be the bottom of the digestion phase, with a very, very strong Q1."

Davis expects the cloud portion of the data center segment to make a big comeback next quarter: "... one thing I would add, we're going to see growth in all three of the major areas in data center, but the standout grower in Q2 is going to be cloud."

...but it probably should be

Intel is still overwhelmingly dominant in the server chip market, but AMD has been clawing back market share ever since it launched its first EPYC chips. AMD shipped 7.1% of x86 server chips in the fourth quarter of 2020, according to Mercury Research as reported by the website Tom's Hardware, up from 4.5% one year prior, and up from just 0.8% three years prior.

AMD has the benefit of manufacturing its chips using Taiwan Semiconductor Manufacturing's advanced 7-nanometer (nm) process, while Intel has struggled with its in-house manufacturing for years. Many of Intel's PC chips are still using the company's 14nm process, albeit a heavily optimized version. The company is producing its latest Xeon Scalable server chips on its 10nm process, but only after years of problems and delays. It will be a while still until Intel is producing any chips at volume using its upcoming 7nm process.

On top of the AMD threat, NVIDIA is getting serious about going after more data center spend. While the company's acquisition of ARM Holdings may get shut down by regulators, it has plans to roll out its first data center CPU in 2023. NVIDIA's Grace CPU is aimed at AI workloads specifically, but the company may eventually go after a broader swath of the server chip market.

Intel is still the go-to choice in the data center for CPUs, and at least a portion of this 20% drop in sales was unrelated to increased competition. But there's no denying that AMD is winning market share, and there's no denying that NVIDIA has a decent shot at capturing a meaningful portion of the server chip market in the coming years. Intel should be very worried about its most lucrative business.