Please ensure Javascript is enabled for purposes of website accessibility
Log In Help Join The Motley Fool
Free Article Join Over 1 Million Premium Members And Get More In-Depth Stock Guidance and Research
By Billy Duberstein - Apr 25, 2021 at 8:20AM

Chalk me up as an AT&T (T -0.66%) skeptic who was positively surprised by the telecom giant's rather solid earnings report last week. AT&T's differentiation seems a bit unclear at this point, although it does have all three elements of wireless, fiber broadband, and content all under one house.  That is something its competitors don't have, with wireless competitors such as Verizon (VZ -0.43%) partnering with outside content producers like Disney (NYSE: DIS), and vice versa.

Whether or not it's the fact that AT&T has a consistent bundling proposition, or that the company is merely executing at a high level under new CEO John Stankey, the company definitely delivered good news last week. But will it last? 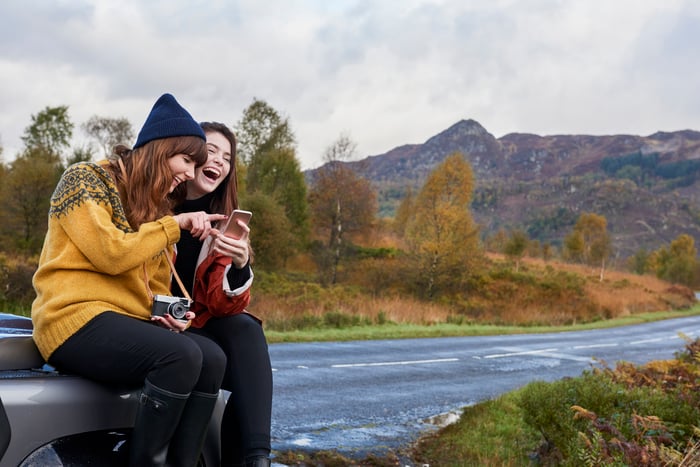 Two main areas where AT&T needs to execute is in 5G wireless, as well as in media with HBO Max. Coming into 2021, those were looking like daunting propositions, with rival wireless platform T-Mobile (NASDAQ: TMUS) assuming the 5G coverage leadership, and fierce competition from Netflix (NFLX 3.29%), Disney, and a whole host of others launching themselves into the streaming wars.

Yet AT&T managed to defy expectations in both of those segments last quarter.

In wireless, postpaid phone net additions were up 595,000, an acceleration over the 163,000 net additions in the first quarter of 2020. That helped grow mobility revenue 9.2% year-over-year, while mobility adjusted EBITDA grew by 2.6%. While the segment margins did plunge almost three percentage points, from 45% to 42.1%, that was likely the result of aggressive discounts on 5G devices. Service EBITDA margins actually increased by 100 basis points.

While the overall WarnerMedia segment saw EBITDA profits decline slightly, even as revenue increased 9%, that was due to an increased investment in HBO Max content. Since the revenue and subscriber growth seem to be gathering momentum, that's probably not a bad investment.

AT&T plans to expand HBO Max to 60 more countries by year-end, which should help the stagnating international sub growth, and it also plans to unveil an ad-based HBO Max alternative in June. That could open up HBO Max to more people who won't necessarily shell out the $15 per month for the all-encompassing ad-free version.

Profits are something to keep an eye on, but growth is great to see

Critics would probably point out the aggressive device discounting to gain new subs for wireless, and also the lower margins on HBO, both on higher content spending as well as bundling discounts. After all, the average revenue per user on HBO was still just below $12, well below the $15 headline subscription price.

The aggressive discounting did seem to do a good job of luring customers away from competitors, however. Verizon lost 170,000 postpaid phone subscribers, but actually grew wireless revenue as customers switched to higher-priced plans. And Netflix's subscriber growth came in below expectations, sending its own stock down after it reported earnings, but operating income more than doubled. Despite the subscriber shortfall, Netflix did beat expectations on revenue and profits.

This could lead some to think AT&T's discounting brought in "lower-quality" customers. Still, these discounts are necessary in competitive fields, and once customers have been lured in, AT&T will probably make it difficult to leave, as it can bundle broadband, wireless, and HBO in a compelling package.

One good quarter was nice to see, but does not make a trend

As 5G kicks into gear in earnest this year, and as all of the legacy media companies fully unveil their own streaming services, look for a lot of noise in both areas as competitors jockey for position. While I had thought AT&T would be a laggard, the company did admittedly surprise with good execution this quarter.

If the company can keep up the momentum without sacrificing too much in the way of profits, it's still a very cheap stock. But it will take more than one good quarter to convince skeptics it's not a value trap in the long run.