Please ensure Javascript is enabled for purposes of website accessibility
Log In Help Join The Motley Fool
Free Article Join Over 1 Million Premium Members And Get More In-Depth Stock Guidance and Research
By Adam Levy - Apr 25, 2021 at 8:45AM

Facebook (META 5.10%) just unveiled a slew of new products centered around the audio medium. The launches include Live Audio Rooms -- a Clubhouse clone -- the ability to listen to podcasts in the Facebook app, and tools to create and share audio clips on the social network and in Messenger or WhatsApp.

The big focus of these launches is to make Facebook a place for creators to share their work with their audience and get paid for it. Facebook wants to be a home for those relationships, and these products may be just the start. 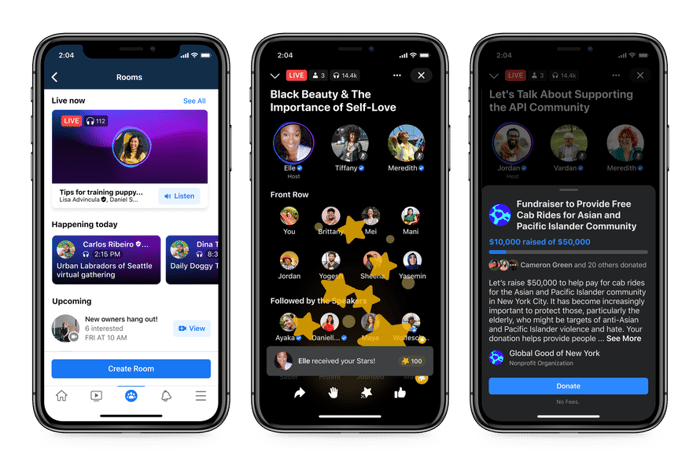 Facebook says it already has 170 million users following a Page for a podcast. Developing a way for users to discover more podcasts and quickly explore their episodes is just one way for Facebook to foster connections between users and creators.

Live Audio Rooms isn't an original idea. Clubhouse made the format popular. Twitter (TWTR 0.39%) has already cloned it, and other tech companies are exploring the format as well. But Facebook is providing podcasters, journalists, and other creators with the ability to easily connect with audience members who are already on Facebook -- and everybody's already on Facebook.

Facebook's also interested in newsletters -- a format for writers to create a more intimate relationship with readers than a blog or posting on social media. Twitter recently entered the space with its acquisition of Revue.

There's an opportunity for Facebook to be the place for creators in those media -- audio and written word -- to engage and grow their audience and make some money while they're at it. Facebook also recently expanded monetization capabilities for video and gaming creators.

In a hint of where this is all headed, CEO Mark Zuckerberg told Casey Newton: "I think a product where a journalist or a creator can basically create a subscription for people who want to follow them that spans both a newsletter and a podcast is going to be a really powerful thing."

For now, Facebook's monetization effort is focused on Live Audio Rooms, which will allow hosts to accept tips, and in the near future charge for one-time access or a subscription. But if Facebook sees traction with its podcast discovery tools, any of its new audio tools, or a newsletter platform, it ought to move quickly to give creators a way to monetize those audiences as well.

"The biggest part of our business is not going to be taking a small cut of things from creator tools," Zuckerberg said in his interview with Newton. In other words, the goal of monetization tools is to encourage creators to use Facebook instead of competing platforms like Substack, Revue, or Patreon -- not to generate revenue directly for Facebook.

Substack, for example, generated $15 million in gross revenue last year. It keeps 10%, or $1.5 million. That might be a lot for a tiny start-up. It's not even a rounding error for Facebook.

But for each writer growing an audience on Substack, or personality hosting live events on Clubhouse or Discord, or podcaster collecting subscriptions and interacting with its audience on Patreon, that's potential lost engagement on Facebook.

"If you think about what our interests are in the space, we want this kind of creativity to thrive," Zuckerberg said. "We think that that basically helps foster social connections, helps build community, help[s] give people things to talk about and share, and that that's ultimately into the bread and butter of what we do."

In other words, a thriving community of premium content creators on Facebook increases engagement across the social network. And that means incremental advertising opportunities for the company, which is where it can make some real money.

At the same time, ensuring creators want to use Facebook and not another platform means Facebook isn't losing time spent on social media to a competitor like Clubhouse or Twitter. So, it's just as much a defensive move for the tech company.

For investors in the FAANG stock, the effect on Facebook's financials may be difficult to ascertain, as many other factors affect engagement and how well Facebook can monetize that engagement. If Facebook provides milestone updates, it'll be best to compare them to the number of creators or consumers on competing platforms, not to the billions of users on Facebook's properties.

Ultimately, becoming a central hub for creators to connect and grow their audiences will benefit the company's bottom line, but it won't be a straightforward source of revenue.