Please ensure Javascript is enabled for purposes of website accessibility
Log In Help Join The Motley Fool
Free Article Join Over 1 Million Premium Members And Get More In-Depth Stock Guidance and Research
By Leo Sun - Apr 28, 2021 at 8:30AM

Share prices of Vuzix (VUZI -1.50%), a developer of augmented reality devices, skyrocketed nearly 1,500% over the past 12 months as demand for its glasses and headsets surged throughout the pandemic.

That rally boosted Vuzix's market cap from about $50 million a year ago to over $1.4 billion. Is Vuzix still a good investment on the AR market, or is there far too much growth baked into its stock price already?

What the bulls will tell you about Vuzix 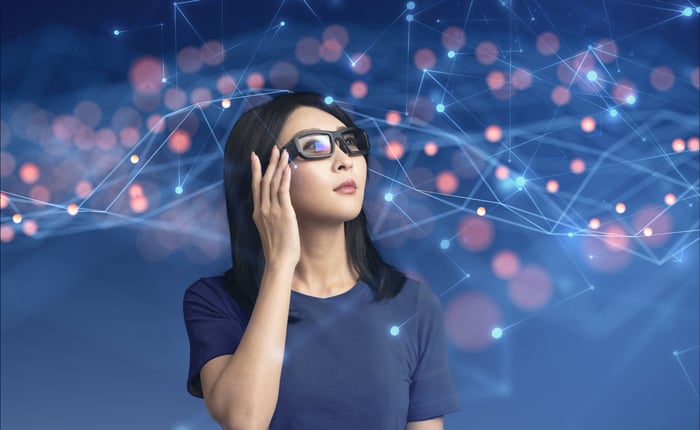 Unlike Google, which initially promoted Google Glass to mainstream consumers, Vuzix targeted enterprise clients with its M-series glasses and manufactured AR glasses for OEM customers. It launched its consumer-facing Blade AR glasses, which can access Google Assistant and Amazon's Alexa, in 2019.

Vuzix's revenue has risen significantly over the past five years, and its growth accelerated last year as remote work in the enterprise and healthcare sectors spurred fresh demand for its M-series glasses.

Only about a quarter of Vuzix's shares are held by institutions, which suggests the company still hasn't impressed the big investors yet. But once that percentage rises, its stock could head much higher.

What the bears will tell you about Vuzix

Vuzix's growth seems promising, but investors should take analysts' estimates with a grain of salt for two reasons. First, only four Wall Street analysts currently cover Vuzix, meaning opinions might be less balanced than they are for other stocks that are scrutinized by dozens of analysts.

Second, those forecasts might not fully account for slower spending after the pandemic passes, or tougher competition in the nascent AR market.

Google relaunched Glass for enterprise users in 2017, Microsoft launched its second HoloLens headset in 2019, and Qualcomm recently launched an AR reference design that will let OEMs quickly produce glasses and headsets on their own.

Amazon also launched a pair of Alexa-enabled smartglasses called the Echo Frames, while Apple and Facebook are also reportedly developing their own AR glasses.

All these heavyweight challengers could pull customers away from Vuzix. These larger companies can afford to sell their devices at lower margins to tether enterprise and mainstream customers to their software ecosystems.

Vuzix's stock also trades at about 65 times this year's sales, making it pricier than many of the market's highest-growth tech stocks. That frothy valuation could limit its upside potential and expose it to higher bond yields, which are sparking a rotation from growth to value stocks.

Vuzix also recently raised $97.8 million (before fees) with a new offering of 4.77 million shares priced at $20.50 per share. That move should significantly boost its cash and equivalents, which stood at just $36 million at the end of 2020 but will also make its stock even more expensive.

Lastly, Intel sold its entire stake in Vuzix earlier this year. Intel might have sold its shares as part of its retreat from the wearables and smartglasses market three years ago, but the sale further suggests Vuzix's upside potential remains limited at these frothy levels.

Vuzix faces a lot of challenges, but it's still the best "pure play" on the AR market right now. Its bigger rivals have deeper pockets, but their AR products will only generate a tiny sliver of their total revenue.

Vuzix doesn't need to go toe-to-toe with Amazon, Apple, or Facebook. It merely needs to secure a small slice of the broader AR market, which Grand View Research expects to grow at a compound annual growth rate of 43.8% between 2021 and 2028.

Vuzix's high valuations should prevent it from replicating its recent multibagger gains in the near future. Nonetheless, it remains one of the most promising and direct ways to invest in the growing AR market.

The Ultimate Growth Stocks To Buy With $1,000 Right Now