Please ensure Javascript is enabled for purposes of website accessibility
Log In Help Join The Motley Fool
Free Article Join Over 1 Million Premium Members And Get More In-Depth Stock Guidance and Research
By Adria Cimino - Updated Apr 29, 2021 at 11:06AM

There is a connection between vaccination and coffee shops.

Moderna has become a household name since the launch of its coronavirus vaccine in December. And it's also become a name on the radar screen of Starbucks (SBUX -0.01%). In fact, the coffee shop giant is paying very close attention to the rollout of Moderna's vaccine -- and those of its rivals Pfizer and Johnson & Johnson.

Starbucks is even using its Deep Brew artificial intelligence (AI) system to predict vaccination progress worldwide. Now, you might wonder why vaccine rollout would be of such interest to Starbucks. Let's look at what CEO Kevin Johnson said during the Starbucks earnings call this week. 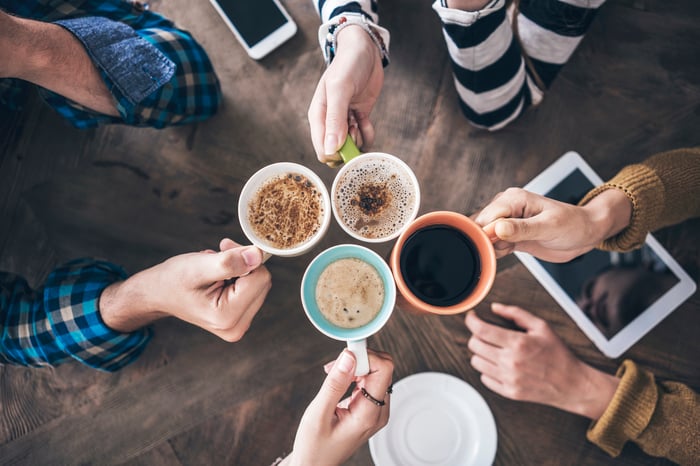 "With vaccination programs underway, and in turn, consumer mobility, we have begun to see what we describe as the great human reconnection," Johnson said. "This is evidenced by our Q2 sales in the U.S., which fully recovered in the quarter."

Johnson said he's followed the Food and Drug Administration's vaccine authorization decisions and noted a correlation to activity in Starbucks stores. The FDA granted Emergency Use Authorization (EUA) to Moderna and Pfizer in December. The agency then offered J&J an EUA in late February. So far, more than 54% of the U.S. adult population has received at least one dose of a coronavirus vaccine, according to the U.S. Centers for Disease Control and Prevention.

The Starbucks CEO's observations make sense. It's clear that as people feel less at risk going out into public places, shops will see more traffic. Starbucks in particular will benefit. That's because the business is a lot about connecting with others. By this, I mean meeting with colleagues, family, or friends for coffee. Or going on a coffee run for your office.

Starbucks' fiscal 2021 second quarter ended on March 28. And vaccination rollout began in late December. That means vaccination impact may be seen throughout the entire quarter. Starbucks reported 9% same-store sales growth in the U.S. for the period. In the previous quarter, ended Dec. 27, U.S. same-store sales fell 5% year over year.

But Starbucks isn't stopping at just a casual observation of U.S. vaccination rates. The company is getting its Deep Brew AI system involved.

AI isn't new at Starbucks. The company already uses Deep Brew for many other tasks, such as the automation of inventory orders and the personalization of product suggestions according to a customer's tastes.

Deep Brew's latest job is to model vaccine rollout in Starbucks' most important markets worldwide. That will offer Starbucks insight on the possible pace of sales recovery in those areas. And beyond recovery, it will allow the company to estimate how long it may take to boost growth in certain countries. Starbucks said vaccination progress could result in a "two-to-three-year tailwind" for the company.

This is just one element that will lift Starbucks' growth in the years to come. The company is making its own efforts such as revamping its store portfolio and growing its digital business. I expect both -- Starbucks' internal initiatives and a more-favorable business environment due to vaccination -- to work together. That's good news for Starbucks' revenue down the road, and its share price.