Please ensure Javascript is enabled for purposes of website accessibility
Log In Help Join The Motley Fool
Free Article Join Over 1 Million Premium Members And Get More In-Depth Stock Guidance and Research
By John Ballard - May 1, 2021 at 11:43AM

There is a treasure trove of value embedded in the toy maker's entertainment business.

There was a lot to like in Hasbro's (HAS -0.65%) fiscal first-quarter earnings report. Sales of toys and games are making a big comeback as the company posted double-digit growth over the year-ago quarter.

As expected, revenue from the entertainment segment fell 34% year over year, but management expects this business to return to growth in 2021 with major new releases in production. The release of G.I. Joe Snake Eyes is scheduled for July 23, and more than 200 other projects are in the pipeline.

Most importantly, there may be more value in Hasbro's 2019 acquisition of eOne that investors are still underestimating. Hasbro recently announced the sale of eOne's music business. The value of the deal suggests management bought eOne for less than what it's worth. 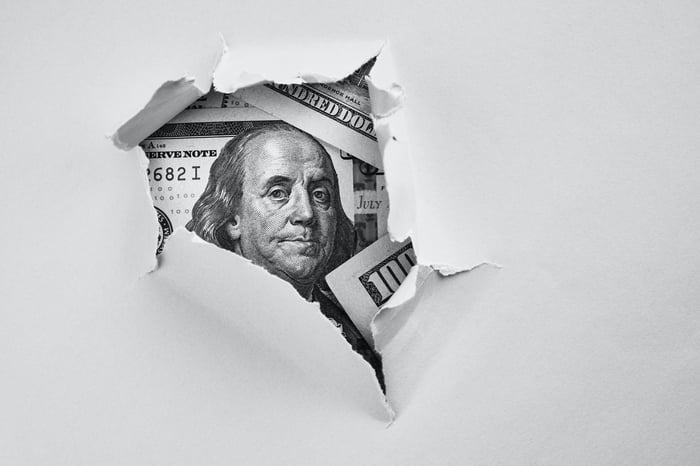 Hasbro's eOne business is shepherding the company's top franchises to the big screen and major streaming platforms. Hasbro acquired eOne in 2019 for approximately $4.6 billion, but it could be worth far more than that.

eOne is a major producer of entertainment media in North America. It develops, produces, and acquires high-quality content that it can sell to media outlets, including digital platforms around the world. It also operates a music label, which produces and releases tracks and albums for artists. But music was not the primary focus of the acquisition, so Hasbro recently reached a deal to sell eOne's music business to a group of entities controlled by Blackstone for $385 million, or a price-to-sales multiple of 3.2. The deal is expected to close in either the second or third quarter this year.

Hasbro said it anticipated recording a non-cash pre-tax loss on the sale of about $125 million to $135 million, which would make it seem like Hasbro overpaid for eOne's music business. In fact, it's the opposite.

During the earnings call, one analyst asked management about the loss on the sale. CEO Brian Goldner said, "We, in fact, sold the business on a multiple basis far over what we had paid for it." The anticipated book-loss on the sale is merely an accounting issue.

Goldner explained that before Hasbro acquired eOne, they appraised what each piece of the business was worth, including the music, television, and film businesses. In other words, they were being careful not to overpay. And looking at the cost synergies and growth opportunities that Hasbro is tapping into with eOne, the $4.6 billion acquisition price might be far less than management's estimation of its intrinsic value.

Breaking down the value of eOne

eOne makes up the core of Hasbro's entertainment segment, which generated over $1.1 billion in revenue and $122 million in adjusted operating profit in 2019. Based on the total acquisition price, which also included paying off eOne's outstanding senior notes and revolving credit facility, Hasbro paid about 37 times eOne's 2019 adjusted operating profit, which looks expensive.

Furthermore, eOne now has access to Hasbro's complete brand library and has been given the reins to produce Hasbro's film and TV projects. eOne hasn't had the advantage of working with such valuable franchises before, which should significantly boost the growth of its annual revenue.

At the time of the acquisition, Hasbro said the deal would improve the company's outlook and long-term profitability, in addition to future growth opportunities.

Some of the anticipated benefits of the deal were delayed last year due to the pandemic. But after live-action production resumed in the third quarter, Hasbro said that eOne revenue and profit increased in the fourth quarter year over year.

Hasbro now expects its entertainment segment to reach 2019 revenue levels this year. It currently has Dungeons & Dragons in pre-production for release in 2023, along with plans to release two to three major motion pictures per year from Hasbro's top brands over the next few years.

"As we move beyond that, as we look at long-term plans, we now believe in the continued growth of eOne's business over the longer term, and we're really seeing the Hasbro IP begin to take hold," Goldner said.

The stock is still trading below its 2019 high of $126.87, but the share price could climb well beyond that level over time. The addition of eOne fits Hasbro's growth objective to spread its brands to more revenue channels, including video games, esports, movies, publishing, and toys. 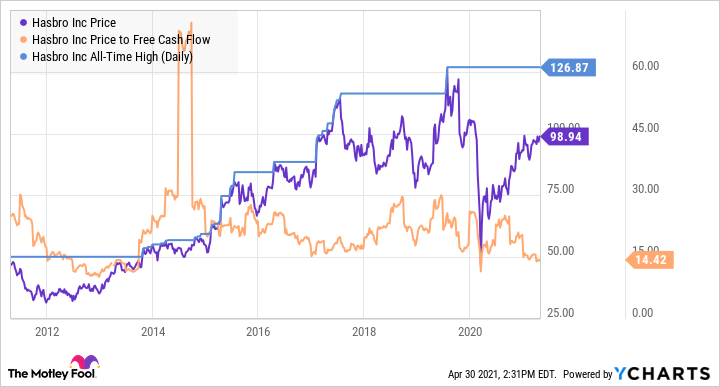 Thinking about the foundation of growth that Hasbro has set with eOne and its entertainment division, shares have significant long-term upside. At a price-to-free cash flow ratio of 14.4, Hasbro looks like a bargain.