Please ensure Javascript is enabled for purposes of website accessibility
Log In Help Join The Motley Fool
Free Article Join Over 1 Million Premium Members And Get More In-Depth Stock Guidance and Research
By Rich Smith - Updated May 24, 2021 at 3:53PM

And can Lockheed Martin help with that?

Space is big. Like big enough to boggle the mind.

To get an idea of just how big space is, try scrolling across this "tediously accurate scale model of the solar system." (Expect to spend your first few minutes just reaching the asteroid belt -- and still only be about 1/10 of the way to Pluto.)

In real life, it took NASA's Perseverance mission only seven months to make the relatively modest hop from Earth to Mars. But the Blue Marble and the Red Planet only orbit that close together once every couple of years. Pick the wrong departure date, and it could take you nearly a year to reach Mars.

This vastness of space poses problems for our astronauts, both logistical (time to resupply anyone sent to Mars) and existential (time astronauts will spend being bombarded by radiation while en route to and from Mars). To help NASA solve these problems, DARPA -- the U.S. Defense Advanced Research Projects Agency -- wants to build faster spaceships -- nuclear-powered spaceships. 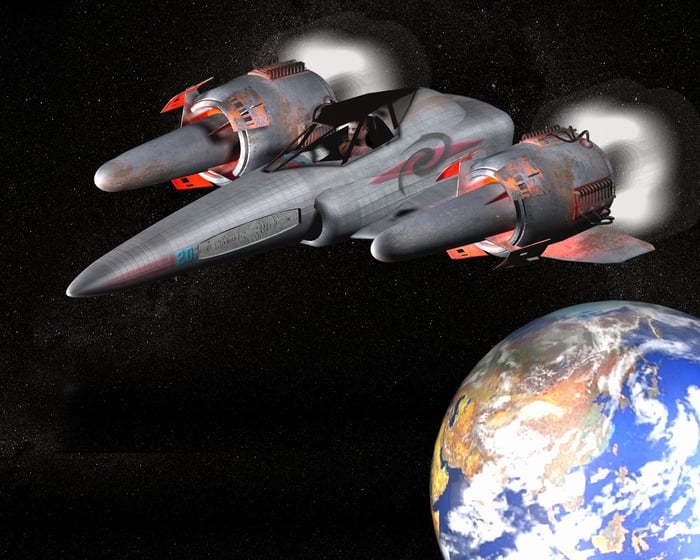 General Atomics will focus on "Track A" of the project -- designing a thermal nuclear reactor (one that uses a nuclear reactor's heat to convert liquid propellant into a gas) and propulsion subsystem. Blue Origin and Lockheed will prepare two separate designs for spacecraft that the reactor might power.

Based on how the respective designs pan out, DARPA will presumably award follow-up contracts to build experimental vehicles late in 2022 or early in 2023, with the goal of having a working prototype or two ready by 2025.

Right now, to minimize travel time (and radiation exposure) for astronauts, the ideal plan would be to launch a mission to Mars when the planets are in close proximity, spend nine months on that trip (acceleration and deceleration need to be gentler for live cargo, making for longer trips). The astronauts would then live on Mars for about 1-1/2 years, waiting for the planets to return to close proximity. Then it would be time for the return trip -- also nine months or so long -- resulting in a total mission duration of three years or more.

With nuclear power, though, experts believe the trips to and from could be cut to as little as three months or less each, and stays on Mars could be as short as desired. An entire there-and-back mission might be completed in under a year.

Nuclear propulsion could also have important military applications, giving "a DRACO spacecraft greater agility to implement the Department of Defense's core tenet of rapid maneuver in cislunar space (between the Earth and moon)," says DARPA.

As the agency explains, "chemical space propulsion systems" (i.e. fuel and oxidizers) are powerful and agile, with high "thrust-to-weight ratios" (like a fighter jet), while solar-powered electrical systems are more efficient (like an ocean-going freightliner). A nuclear DRACO system promises to deliver the advantages of both simultaneously -- potentially enabling a fleet of fuel-efficient space fighters for the U.S. Space Force.

And as we often find with technology initially developed for the military, DRACO could have civilian applications, as well. Imagine, for example, highly maneuverable satellites with essentially "infinite fuel" that can move to whatever orbits their owners require, anytime they like. Or space-faring Swiffer mops, scooting around Earth orbit and cleaning up 60 years' worth of accumulated space trash that currently imperil operational satellites.

Two of the three companies winning DARPA DRACO contracts this month are private, so ordinary investors can't invest. But one isn't.

As space investments go, Lockheed Martin's problem isn't that you can't buy it -- it's that the company is being pressured by low-cost space-launch rivals such as SpaceX, and eventually Blue Origin. The result is that operating profit margins at its space division shrank by about 120 basis points last year to just 9.4%. (That's far below Lockheed's overall 13.2% operating profit margin, according to data from S&P Global Market Intelligence).

Although Lockheed Martin may be getting priced out of some space missions, however, the company has a long and successful history in space. Even if NASA and the military increasingly choose SpaceX to provide their launch-service needs, Lockheed Martin may have more than just a strong space history if it can pivot to serve other important missions -- such as nuclear propulsion.

It may still have a future in space, as well.