Please ensure Javascript is enabled for purposes of website accessibility
Log In Help Join The Motley Fool
Free Article Join Over 1 Million Premium Members And Get More In-Depth Stock Guidance and Research
By Trevor Jennewine - May 2, 2021 at 7:30AM

Both of these tech companies have been market-beating investments.

Last year, as the pandemic forced business closures and social distancing, consumers turned to digital channels for shopping and entertainment. While that hurt many traditional retailers and media companies, it was a strong tailwind for Amazon (AMZN 3.15%) and Roku (ROKU 2.15%).

Over the last three years, both of these tech stocks have outperformed the broader market, with shares of Amazon rising 120% and Roku surging 1,000%. But which one is the better buy today?

Amazon was a first mover in the e-commerce industry, and that advantage has led the company to incredible success. Today Amazon is the largest online marketplace in the U.S., supported by an extensive fulfillment and logistics network. Last year that scale helped Amazon capture an incredible 40% of online retail spending in the United States. 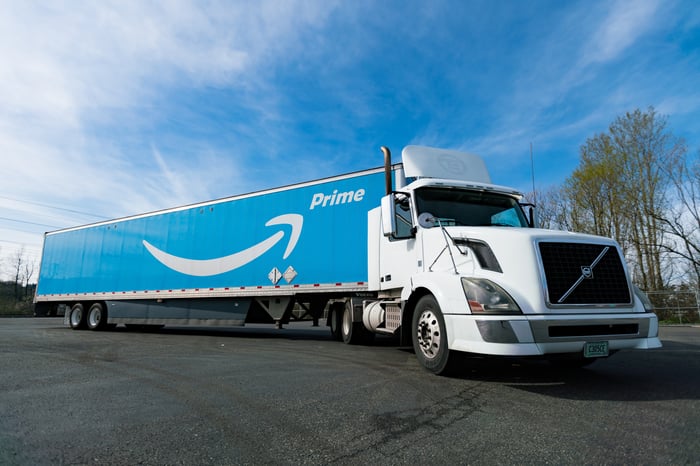 Amazon continues to press its advantage here. In 2020 the company expanded its fulfillment footprint by 50%, and now handles over 50% of its own shipping. That gives Amazon greater control over transit times, which ultimately creates a better experience for customers.

Like its online marketplace, Amazon's cloud computing business -- Amazon Web Services (AWS) -- was also a first mover. Today AWS is still the industry leader, with a more comprehensive portfolio of services than any of its rivals. That value proposition helped it win new customers like JP Morgan Chase and Twitter last year, and powered revenue growth of 30%.

Looking ahead, Amazon still has opportunities to expand, despite its $1.7 trillion market cap. For example, the company's digital ad revenue hit $15.7 billion in 2020, according to eMarketer. That means Amazon captured 10.3% of all digital ad spending in the U.S., up from 7.8% in 2019.

As a whole, Amazon's businesses have powered strong growth on both the top and bottom lines.

In the years ahead, Amazon should continue to benefit as e-commerce, cloud computing, and digital advertising continue to gain popularity -- even without Jeff Bezos.

Roku is the leading streaming platform in the United States in terms of streaming hours, active accounts, and smart TV sales. Its platform offers viewers a convenient way to access and manage all of their streaming services, including subscription-based and ad-supported content.

Roku is increasingly differentiating itself through content. Specifically, The Roku Channel is a collection of ad-supported programming available to Roku users. The company obtains content by licensing, purchasing, and negotiating deals with publishers, and currently offers access to more than 40,000 movies and shows, and 165 live TV channels.

Earlier this year Roku announced its acquisition of original programming from Quibi. The company rebranded this content as "Roku Originals", and plans to make it available to viewers on The Roku Channel later in 2021. The company also announced that "Roku Originals" would be the brand name for future original content, implying this could be an important part of its growth strategy in the future.

Also noteworthy, streaming hours reached 58.7 billion in 2020, up 55% over the prior year. This indicates improving user engagement, which further sweetens the deal for marketers. Not surprisingly, monetized ad impressions jumped over 100% in Q4 2020, and total ad spending on Roku's platform more than quadrupled last year.

Roku's growing clout in the streaming industry has given it some bargaining power. Going forward, this should help the company bring new content to its platform, driving user growth in the process. Furthermore, Roku partners with over a dozen manufacturers to produce its Roku TVs, which should also help bring new users to the platform. Together, these growth drivers give Roku a shot at gaining ground in the massive U.S. digital ad market, which will exceed $190 billion in 2021, according to eMarketer.

For what it's worth, I am a shareholder of both Amazon and Roku, and I have no plans to sell either stock. Amazon is certainly much more profitable and has achieved must greater scale compared to Roku. Even so, it's hard for me to imagine Amazon as a five-bagger over the next decade.

By comparison, Roku has a market cap of $46 billion, but I can picture this tech company as a $250-$300 billion business in the future. Additionally, Roku has established itself as a leader in the booming streaming industry -- and I think that leaves more upside for long-term investors.

So, by a thin margin, Roku wins this contest.