Please ensure Javascript is enabled for purposes of website accessibility
Log In Help Join The Motley Fool
Free Article Join Over 1 Million Premium Members And Get More In-Depth Stock Guidance and Research
By Eric Volkman - May 3, 2021 at 6:45PM

The 2022 to 2023 National Football League (NFL) season is still far away, but it seems Amazon.com (AMZN -2.78%) is already one of its winners. On Monday, various media reported that the company's Amazon Prime Video will begin its tenure as the exclusive broadcaster of Thursday Night Football games then. That's one season prior than stipulated in the original NFL/Amazon agreement.

The current Thursday Night Football broadcast rights holder, Fox (FOX 0.56%)(FOXA 0.73%), agreed to bow out of its arrangement with the NFL one year early, according to an article in The Wall Street Journal. It wasn't immediately clear why. 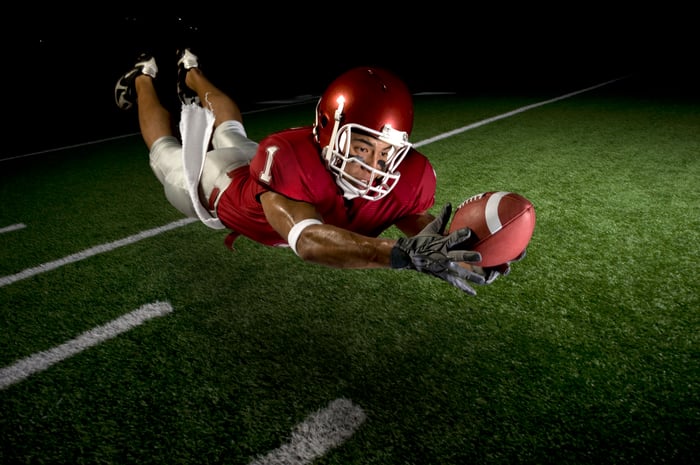 While Amazon aired Thursday Night Football contests before (in the 2017 to 2018 season), it did so only as the official streaming service of the games, not as their exclusive broadcaster. Last month, it signed a 10-year deal with the NFL for that exclusivity; the early start of the partnership will tack an extra year onto that arrangement.

Neither Amazon nor the league has divulged the financial terms of their contract. The Journal cited "people familiar with the matter" as saying that, on average, the annual rights fee is $1.2 billion.

The deal covers 15 regular season games and one pre-season contest. In the press release touting the original contract, Amazon said that its coverage will include pre- and post-game shows, half-time content, and interactive elements, such as its Next Gen Stats.

With the early commencement to the Thursday Night Football deal, Amazon continues in its quest to get an edge in the ultra-competitive streaming-video space. The deal also helps lift the company's ever-rising profile and make its branding that much more ubiquitous.

It might not be leaving much of an impression on investors, though. Amazon stock closed Monday down 2.3%, while the S&P 500 inched up by 0.3%.