Please ensure Javascript is enabled for purposes of website accessibility
Log In Help Join The Motley Fool
Free Article Join Over 1 Million Premium Members And Get More In-Depth Stock Guidance and Research
By Daniel Foelber - May 4, 2021 at 10:21AM

After breaking past the $300 per share mark and marking a fresh all-time high in December, shares of package delivery stock FedEx (FDX 2.15%) had a rough start to 2021. But a strong fiscal third quarter (Q3 FY21) report followed by United Parcel Services' (UPS 0.23%) huge beat on April 27 has shares of FedEx knocking on the door of that $300 price point once again.

FedEx stock has tripled in value from its COVID-19 low in March 2020. Is there more room to run, or has FedEx gotten ahead of itself? 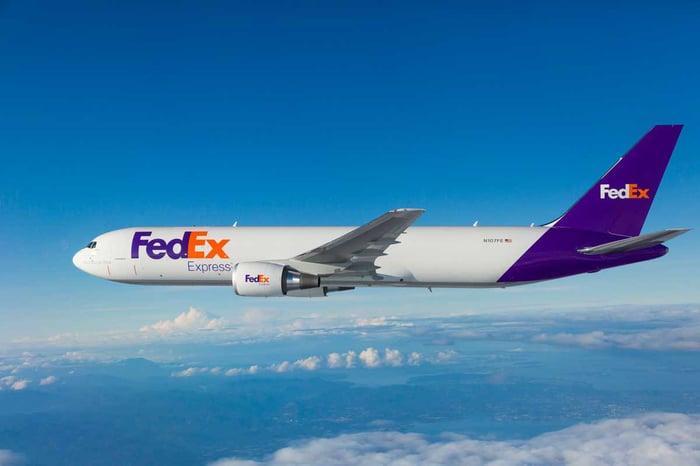 From dog to darling

It seems like a distant memory now, but it wasn't long ago when FedEx just couldn't catch a break. After peaking at the beginning of 2018, FedEx suffered an unrelenting two-year decline while the S&P 500, the broader industrial sector, and rival UPS posted gains. 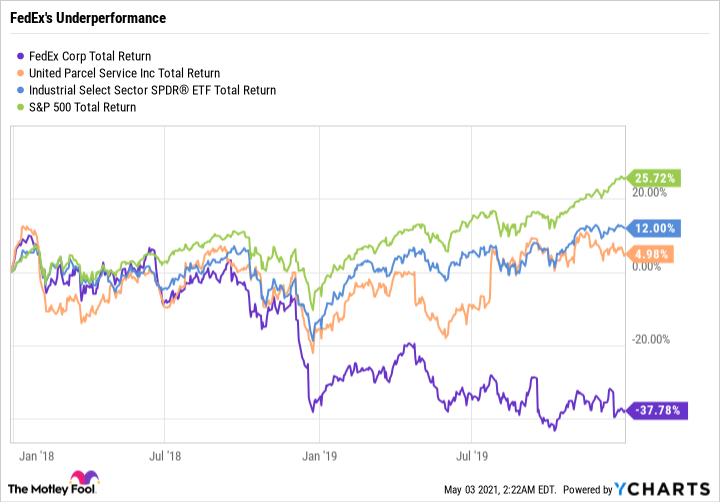 FedEx was hit hard by the U.S.-China trade war of 2018. China is a key market for FedEx. And like other U.S. companies (such as Starbucks), FedEx's global reputation made it a proxy for geopolitical tensions. As its business struggled, FedEx announced in June 2019 that it was suing the U.S. Department of Commerce.

Between the period ending Feb. 28, 2018 and the period ending Nov. 30, 2019, FedEx's earnings disappointed Wall Street. Its stock fell the day after earning for eight straight quarters and fell by more than 10% three of those times. In short, FedEx simply wasn't delivering in an environment when other companies were.

In 2020, FedEx flipped the script. It was one of the few industrial stocks that thrived during a recession when so many other companies were posting some of their worst results in over a decade. The story began with folks stuck at home and ordering more packages online, which bolstered FedEx's revenue in its ground segment to help offset weakness in express and freight.

UPS had similar results. Its business to consumer (B2C) segment offset declines in business to business (B2B). However, the real surprise came as the global economy began rebounding faster than the U.S. What followed was continued strength in FedEx ground paired with a rebound in express and freight -- which helped FedEx's profitability. 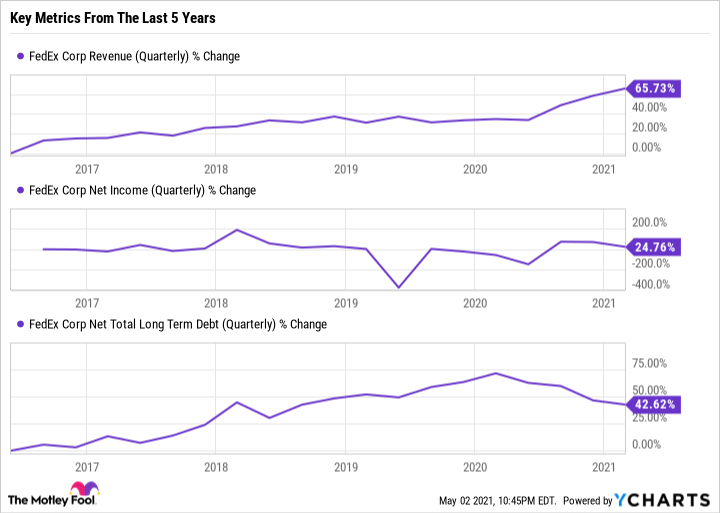 By leveraging its new seven-day-a-week ground operations, FedEx was able to deliver record volumes during the holiday season, resulting in record high revenue and operating profit in December. FedEx express suffered a $340 million blow due to expenses from the February winter freeze, without which the company said it would have achieved record operating profit for the quarter.

FedEx's freight business and its high-margin ground business, led by e-commerce, are delivering the profitability that FedEx needs to ramp spending. For the nine months ended Feb. 28, 2021, freight and ground delivered operating margins of 11.5% and 9.3%, respectively, compared with 6.7% for express. As expected, FedEx's operating margin has decreased as it relies on higher volumes and lower margins. Its operating margin is now just above 6%, quite a bit lower than UPS by comparison. 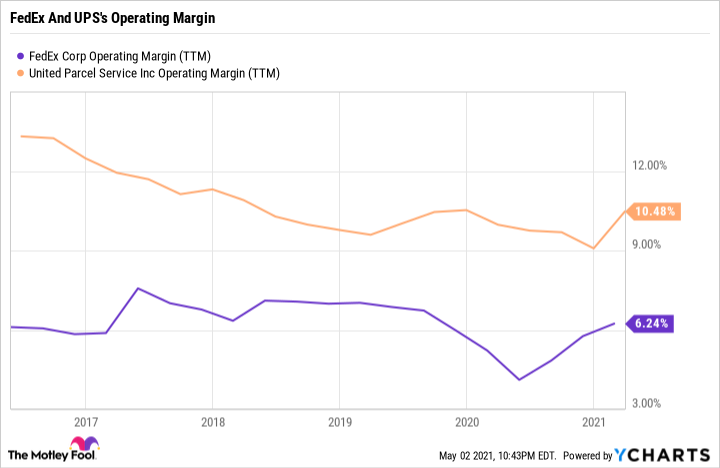 FedEx expects to finish the FY with adjusted earnings between $17.60 and $18.20 per share and capital spending of $5.7 billion -- slightly less than FY 2020's $5.9 billion. If it hits this target, FedEx will have an adjusted price-to-earnings (P/E) ratio right around 16, which is impressive considering how much the stock has climbed.

FedEx is in a great position to benefit from economic growth and a prolonged surge in e-commerce. It expects operating margins to rise in the coming months, which should further help profitability.

It's good to see FedEx begin to pay down its debt, which reached an all-time high in early 2020. FedEx's results indicate it deployed its debt effectively, but it stands to benefit from decreasing its leverage going forward. On its most recent earnings call, management indicated intentions to strengthen the balance sheet by using excess free cash flow (FCF) to refinance and pay down debt.

Given FedEx's growth trajectory, surprisingly reasonable valuation, and improving financial position, the stock seems like a reasonable buy at this time. However, UPS seems to have a slight edge over FedEx given its superior profitability, methodical e-commerce rollout, and stable and growing dividend. It's a close call and investors are likely to do just fine with either transportation stock.