Please ensure Javascript is enabled for purposes of website accessibility
Log In Help Join The Motley Fool
Free Article Join Over 1 Million Premium Members And Get More In-Depth Stock Guidance and Research
By Travis Hoium - May 4, 2021 at 4:55PM

Shares of solar energy stocks dropped like a rock on Tuesday as investors speculated that higher interest rates could be on the horizon. Very few companies were spared -- suppliers to developers to finance companies were dropping today.

Some of the biggest movers included: 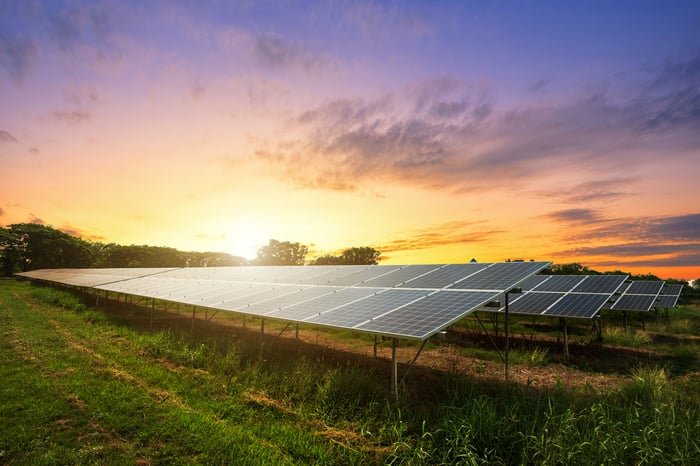 The big scare to the market today was Treasury Secretary Janet Yellen saying that interest rates may need to rise to keep the economy from overheating. All of the stimulus funds added to the economy over the past year, combined with the economy reopening more broadly, is already leading to higher prices for commodities. That may lead to inflation more broadly, which is what she's worried about.

Yellen said that a "modest" increase in rates may be necessary, and rates are near historic lows. But any increase has nonetheless spooked growth investors today and solar energy stocks, for a more specific reason.

Solar energy developments benefit from low interest rates because they act similar to a bond. A project is very expensive upfront but pays investors back over decades, so a lower discount rate or cost of debt or capital will either make a project more valuable upfront or allow for a lower cost of energy long term. Whether you're developing a utility-scale project or a rooftop solar system, this dynamic is the same.

What's a little odd is that bond markets aren't reacting nearly as much as stocks are to today's comments. In the U.S., Treasury yields are fairly flat and are actually down over the past month. That should be good news for solar stocks.

Investors shouldn't panic over this move today and chalk it up to more volatility in the market. Rising rates may not be great news for solar stocks, but it's also not surprising. And investors should keep in mind that as long as rates are near historic lows, they'll be a tailwind for solar developers because they have a much lower cost of capital now than they did a few years ago.

What will be key to watch over the next couple of weeks is the momentum in solar energy deployments right now. SolarEdge reported a drop in revenue in the first quarter, and that wasn't received well by the market.

But that's just one company and others may see more tailwinds for the industry overall. Either way, don't be surprised by volatility in solar energy stocks, which have had a great year on the stock market, despite today's dip.