Please ensure Javascript is enabled for purposes of website accessibility
Log In Help Join The Motley Fool
Free Article Join Over 1 Million Premium Members And Get More In-Depth Stock Guidance and Research
By Reuben Gregg Brewer - May 7, 2021 at 9:03AM

The next generation of electricity may not come from where you think. Here are three examples that show why.

The way the world produces and consumes energy is changing, which shouldn't come as a shock given the low-carbon zeitgeist. But some of the companies working to build the next-generation energy grid might come as a surprise. Here are three stocks to look at with clean energy plans that may not be as obvious as you'd think.

The first name up is actually not so shocking in and of itself, though the scale of its achievement might be. NextEra Energy (NEE -0.52%) is one of the largest electric utilities in the United States. Its utility operations are located in Florida, which has long benefited from people moving to warmer and low-tax states. The company serves 5.6 million customers across its Florida Power & Light system. And, honestly, it makes sense that a giant utility would be working to shift its grid to support the broader clean-energy push.

However, NextEra Energy also has a division called NextEra Energy Resources that provides long-term, contract-based renewable power to others. The company claims it is the largest generator of solar and wind power in the world. This Florida utility is very much leading the charge in renewables, and should be a major growth engine for years to come.

The company currently has 15.25 gigawatts of signed contracts for new renewable power construction projects, but it expects it could end up building roughly twice that figure at the high end of its 2021-to-2025 projection range. NextEra Energy is rarely cheap -- its 2% yield is near historical lows. However, dividend growth investors might want to take a closer look given that the utility expects to increase the dividend 10% in 2022, in line with its average annualized increase over the past decade. Note, too, that NextEra is a Dividend Aristocrat with over 25 years of annual hikes under its belt.

Total (TTE 2.07%) is the next name up. Most investors will probably recognize it as an integrated oil and gas company. That's totally true, but the company has also been investing in clean energy for a very long time. For example, it owns a controlling interest in SunPower and its recent spin off Maxeon Solar Technologies. These two companies are major players in the distributed solar space.

And that's not the whole story. Total has been building what it calls its "electrons" business for several years, including the acquisition of European utility assets.

To be fair, oil and natural gas are still the biggest contributors to Total's business, and will be for a long time to come. However, it is aggressively using that cash cow operation to change along with the rest of the world. Indeed, by 2025 it hopes to triple the size of its "electrons" business, taking it from 5% of the pie to 15%. That may not sound like much, but you need to recognize the massive scale at which $120-billion-market-cap Total operates. It is quickly becoming a major player in the energy sector. And dividend investors can collect Total's fat 7% yield thanks to the carbon side of its business, knowing that it's also a hidden clean energy play.

The last name here is Canada's Enbridge (ENB 1.50%), one of the largest midstream companies in North America with a $78 billion market cap. But you need to dig in a little to understand that this company has seen the writing on the wall and is working to help the clean energy transition along. Oil pipelines make up 54% of EBITDA, so there's no question that the company has its roots in dirty carbon fuels. However, that figure was once 100%. Over the decades Enbridge added two material natural gas businesses to the mix, one in the pipeline space and the other a natural gas distributor (together making up 43% of EBITDA), and it started to invest in renewable power in 2002 (this business is now 3% of EBITDA). 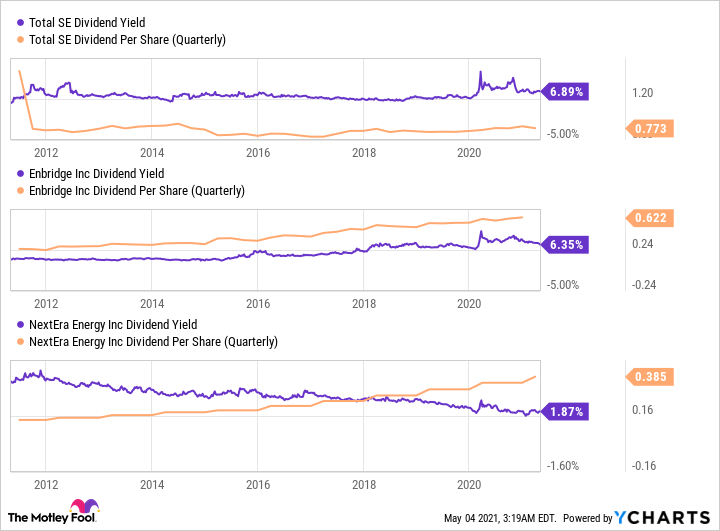 Natural gas, which is cleaner than coal, is expected to be a transition fuel that supports the broader push toward lower carbon emissions. The company's solar and wind operations fall into the clean energy category, with a number of large offshore wind projects in Europe sitting in the backlog. Like Total, Enbridge is using its cash-cow operations to fund a slow and steady business overhaul that will allow the Canadian company to get more and more green over time. While that's happening, investors can collect a 6.8% yield from a company with an over-25-year track record of annual dividend increases.

Other ways to play

Pure-play renewable power companies might gain all the headlines, but they aren't the only names in the space. NextEra Energy's role in the sector is fairly well known, and reflected in its stock price, but its biggest allure is probably its dividend growth. Total and Enbridge are more like hidden gems, with carbon businesses supporting their increasing scale in cleaner alternatives. Investors looking for generous dividend yields and a clean energy angle will probably find both attractive.

But perhaps the most important takeaway here is that you don't need to invest in an overpriced pure-play clean-energy company to invest in the changing shape of the energy grid.